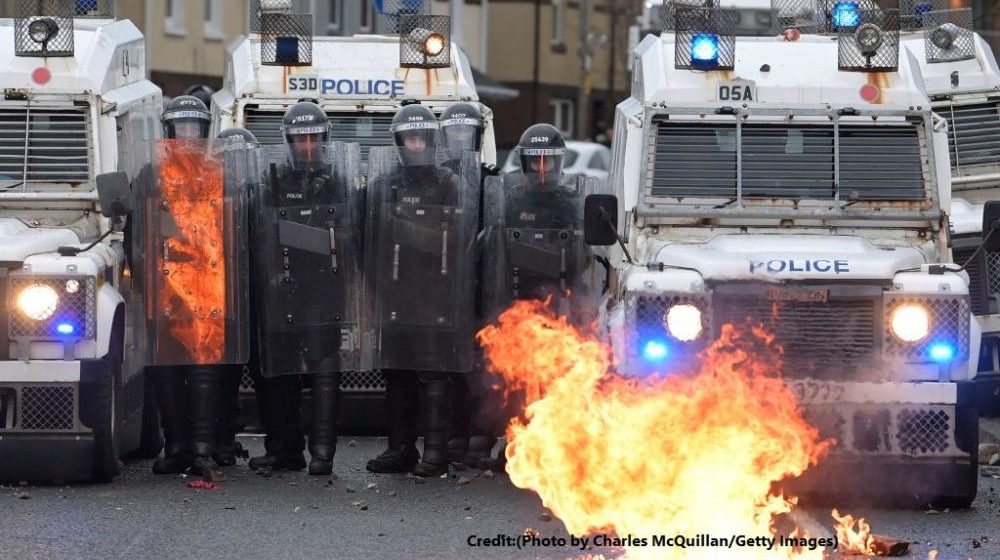 Rioting is not uncommon in Northern Ireland, nor is the sight of young people throwing missiles at the police. These do, however, tend to be wearily predictable in terms of dates and locations.

The Twelfth of July, the Protestant celebration of the anniversary of the battle of Boyne, is a flash point, and skirmishes often centre around Ardoyne in Belfast or Creggan in Derry.

Last week, though, the riots have strayed from the pattern – a clear cause for concern. While shocking to many outside of Northern Ireland, they were not unexpected.

The temperature under the boiling pot has been climbing higher and higher for a long time and there are those who have been willing to stir it. The contents are combustible.

Northern Ireland is a mix of strong Irish and British identities. There are also those who are both, or neither. It is a place of strong political ideologies in unionism and nationalism, which each aspire to opposing constitutional futures.

These were accommodated in the 1998 Agreement Good Friday in a careful balance, underpinned by a strong British-Irish partnership.

But Northern Ireland is also a post-conflict society. The legacy and trauma of the Troubles continue to have effect and to cause harm.

It is a society whose political leadership has so far seemed unable, if not unwilling, to address its deep inequality, persistent poverty, and segregation.

Nine out of the ten areas of most acute multiple deprivation are in North Belfast and Foyle, including Ardoyne and Creggan. Paramilitarism continues to ‘remain a reality of life’ in Northern Ireland.

There have been over 160 security-related deaths in Northern Ireland since the peace Agreement. This is the mix in the pot.

Keeping this pot at something below a gentle simmer requires care and constant supervision. The prospect of Brexit threatened to push it to boiling point.

The UK-EU negotiations turned up the heat on Northern Ireland. It now had to manage uncertainty about its immediate future as well as its prospective one.

The uncertainty was compounded by the unionism and nationalism on both sides of the Brexit debate. The collapse of the power-sharing Executive in January 2017 took away its cross-community, democratic voice for the next, all-important, three years.

The Protocol on Ireland/Northern Ireland in the Withdrawal Agreement manages to keep the pot upright – but it is something of a jimmy-rigged arrangement that needs time and adjustment to fit properly.

However, fraught relationships and distrust between the two largest parties of the Executive, restored in January last year, have been exacerbated by scandals of public irresponsibility in which the First Minister and deputy First Minister were personally involved.

The parties have fallen out over the handling of the coronavirus pandemic. And they are at odds over the Protocol as well as Brexit.

Unionist politicians, furious over trade tensions as a result of the Protocol, are united in calling for it to be scrapped.

They claim Northern Ireland’s place in the union is at stake, which has only spurred on concerns for the fundamental tenet of loyalist and unionist identities.

They have sown doubt in the integrity of institutions of law and order in their recent criticisms of the Public Prosecution Service and calls for the resignation of the PSNI Chief Constable.

The announcement last month by the Loyalist Communities Council that they were withdrawing support for the 1998 Agreement was a further sign of danger ahead.

The mix is combustible; the pot is unstable; the temperature is high. It is all too easy for a reckless few to stir the pot and watch the flames rise.

By Professor Katy Hayward, Senior Fellow at the UK in a Changing Europe. This piece originally featured in CityAM.