UK and Grexit: be careful what you wish for 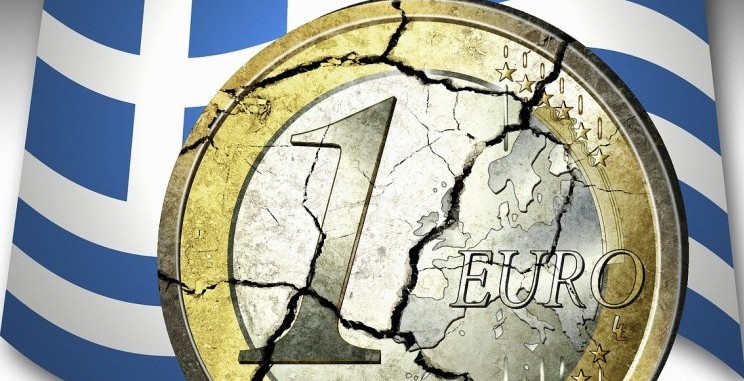 The Greek government’s decision to hold a referendum on 5 July over its negotiations with the European Union (EU) and the International Monetary Fund means that Grexit – Greek exit from the eurozone – is now a very real possibility.

Some voices in the debate on the UK and Europe suggest Grexit could be in the British national interest. This post challenges this view.

In a recent article in The Telegraph, Jeremy Warner offered two reasons why Grexit could have a ‘silver-lining’ for the UK.

Firstly, it would strengthen David Cameron’s bargaining position in negotiations over a new settlement with the EU.

Secondly, it would deal ‘a severe setback, or even fatal blow, to the EU’s whole mission statement of “ever closer union”’. Far from being an isolated argument, glass-half-full analysis of Grexit’s likely impact on the UK can be found here and here.

The economic reality is Grexit would be bad news for Britain. Seven out of the UK’s top ten export partners are eurozone members – France and Germany alone buying more British exports than the United States.

Research by Zsolt Darvas and György Szapáry suggests Britain’s business cycle is more closely aligned with the eurozone than is the case for some eurozone members. Although the UK has its own currency it would be heavily exposed to Grexit’s impact on the eurozone’s fragile economic recovery.

The UK would be vulnerable to Grexit’s impact on the global economy. A Bertelsmann Foundation study suggests Grexit would have a limited impact on the world economy but warns of a ‘severe worldwide recession’ should Grexit cause other members to leave the eurozone.

The UK economy stands to lose either way, the study suggests, with UK real gross domestic product expected to decline by €6bn under the Grexit only scenario and by as much as €738bn in the event that Portugal, Spain and Italy also leave.

Another reason for the UK to fear Grexit is that the financial fortunes of the UK and eurozone, and its periphery, are closely intertwined.

The Bank of England’s Financial Stability Committee concluded UK banks’ exposure to highly indebted euro-area economies remained significant even if direct exposure to Greece was small. It is not without cause, therefore, that George Osborne told MPs earlier this week that ‘Britain’s best interests would be served by an agreement between the Greek government and the eurozone’.

UK banks have reduced their exposure to the eurozone and its periphery since the global financial crisis began (Figure 1). But UK banks remain almost as exposed to eurozone countries as to the United States.

Eurozone periphery countries, meanwhile, accounted for around 6% of British banks’ international claims in December 2014, or around $222bn. British banks’ exposure to Greece may only be around $12bn but some banks are more vulnerable than others.

Bernstein Research estimated that HSBC’s exposure to Greece in 2013 to have been in the region $7bn. Although the bank appears to have cut back on its dealings with Greece since, it is being closely watched as risks of Grexit mount.

Figure 1: British banks’ exposure to other countries (as % of total international exposure). 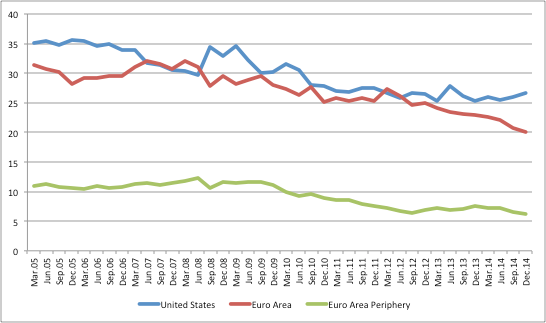 An additional economic cost to the UK of Grexit concerns the fiscal consequences of Greece’s leaving the eurozone but remaining in the EU.

Under Article 143 of the Treaty on the Functioning of European Union, member states facing balance of payments problems can be offered ‘mutual assistance’. This article was invoked to provide support to Hungary, Latvia and Romania following the global financial crisis but cannot be extended to eurozone members.

Greece was eventually offered loans by EU member states outside the scope of the Treaty. The UK did not contribute to such support but, as HM Treasury recently confirmed, it could be asked to contribute to balance of payments support for Greece, should it leave the eurozone.

It is difficult to see how Grexit would strengthen the UK government’s hand in negotiations with EU partners. One school of thought suggests the UK would benefit from being part of a ‘grand bargain’ over Britain’s place in Europe and reforms designed to keep the eurozone together with or without Greece. The rationale is the UK would find it easier to extract concessions by wielding a veto over eurozone reforms but this argument is problematic.

A ‘grand bargain’ would be more difficult to ratify. An EU treaty designed to codify concessions to the UK would still need to be ratified by all EU member states but the passage of a treaty encompassing changes to eurozone governance would be more complicated still.

Major reforms to the eurozone would probably require a referendum in at least one member state, Ireland, and perhaps others, with the result that British voters would go to the polls alongside other Europeans. The EU’s track record of passing referendums is poor, thus raising the possibility that voters in the UK could agree on a new settlement with the EU only to see it rejected by other member states.

Arguments in favour of a grand bargain are also premised on a problematic conception of bargaining within the EU. Concessions are common in the EU’s consensus-seeking approach to international diplomacy and EU partners have generally been willing to cut a deal with the UK in treaty negotiations: John Major’s opt-out from the eurozone at Maastricht and Gordon Brown’s opt-outs on justice and home affairs at Lisbon are cases in point. The idea the UK can only secure concessions over its own place in the EU when eurozone members are over a barrel is misguided.

The surest reason to expect EU partners to offer concessions to the UK is Brexit – British exit from the EU – would be costly for all concerned.

A recent study by the Bertelsmann Foundation suggests the ‘static’ loss in real GDP per head from UK exit from the EU could be as much as 2.98% for the UK and as high as 0.36% for the rest of the EU.

Such costs would be unevenly distributed across EU member states with Ireland losing more than the UK from Brexit under some scenarios.

Dynamic losses, which take account of effects such as declining productivity and investment, would be higher still, with Brexit costing the UK as much as 14% of its GDP per head by 2030 and Germany as much as 2%, according to the same study.

In short, it is difficult to see how Grexit serves the British national interest. Greece’s exit from the eurozone would be economically costly for the UK, especially if this event reignited sovereign debt difficulties in other member states and set in motion the break-up of the eurozone.

Politically, the UK has little to gain and much to lose from linking David Cameron’s search for a new settlement with ongoing reforms to eurozone governance.

The UK has chosen to remain outside the eurozone but its interests are closely aligned with those countries that share the single currency. As such, British people should hold their breath as Greeks go to the polls on Sunday and be careful what they wish for.