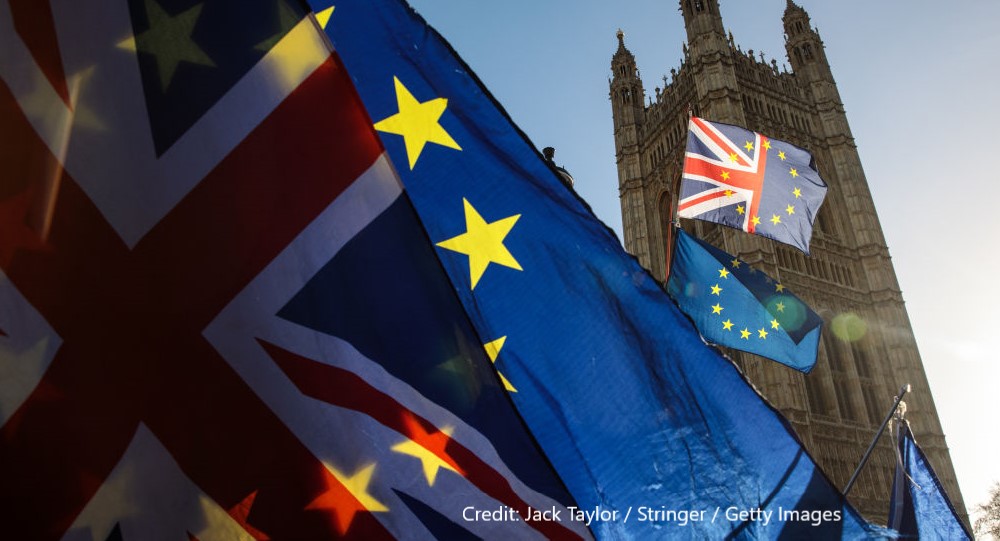 Corporate political activity, aka business lobbying, is a non-market strategy that businesses employ to maintain an advantage over their competitors. A business aims to establish and maintain contact with policymakers – such as members of government or parliament, their assistants, bureaucrats, or diplomats – typically through a dedicated government-affairs office. The objective is to influence policy and extract valuable information (see Coen, Katsaitis, Vannoni 2021).

Until Brexit, British interests had gained notable access and influence over EU policymaking. UK business was one of the first to recognize the importance of the Single Market, quickly setting up government-affairs offices in Brussels, following the Maastricht Treaty in the ‘90s. Its influence is partly due to its strategic choices, reliable expertise, and engaging with UK, EU, and international policymakers and policy stakeholders.

UK business benefited from British EU membership since UK interests (including UK businesses) were a part of Brussels’ constituency, UK policymakers had a front-row seat at the EU’s tables, and UK and EU business interests were likelier to coincide as a result of membership.

While pre-Brexit the UK government and British interest groups were insiders, post-Brexit they are less so. There are two notable changes that impact UK business’ position.

First, there is no UK representation in EU institutions. There are no longer UK Members of the European Parliament, UK ministers are not invited to participate in key Council negotiations, and new posts at the European Commission filled primarily by EU citizens.

As such, UK business positions are much less likely to find their way onto EU policymaking agendas. Similarly, valuable insider information cannot be conveyed back to UK business directly via British politicians and civil servants working within EU institutions.

Second, since the UK is no longer an EU constituency, its policymakers have fewer incentives to invite British business to meetings. Aiming to maintain their legitimacy, EU institutions and the people working within them will naturally focus on addressing, considering, and representing EU-level and member states’ agendas.

From an interest group perspective, Brexit places UK business on the outer rim of EU-level professional and trade associations representing industries. This is not to say that Brexit automatically excludes UK business from such associations.

However, UK-specific requests are likely to be of lower priority to transnational associations than those coming from organizations whose headquarters remain within the EU.

Nevertheless, Brexit’s impact on UK business lobbying will not be homogenous. The extent to which EU policymakers and other key actors are willing to engage with UK business will depend on the nature of the policy field and the specific industry in question.

Policy that takes place in a more political context, where (re-) distributive issues are more pertinent, such the Common Agricultural Policy, will be primarily responsive to political input from EU constituencies.

Conversely, in policy fields that are more technical and regulatory-focused, such as tech regulation, policymakers in Brussels are likelier to welcome non-EU contributions as they are dependent on various sources of expertise to produce high-quality outputs.

Moreover, there are industries where UK business is deeply embedded into the European supply chain and market, making it harder to distinguish between different national players and establish “winners” and “losers”.

In areas where UK business is leading the field, for example aerospace, its expertise makes it an integral component. In such cases, it is likely that British business will maintain at least some presence and influence.

The effects of Brexit are already being felt. UK business specifically, and UK interest groups more broadly, are reassessing the resources dedicated to lobbying Brussels. In a complex environment, lobbying costs will increase, meaning fewer actors will be able or willing to keep up.

As a result, British business will have to re-direct a lot of its activity to Westminster. Indicative of this shift, pre- and post-Brexit interest group activity in Brussels has already noticeably changed.

We compare the behaviour of Brussels’ largest national interest group representations: Germany, France, and the UK. Whereas their mobilization over time naturally increased as EU policymaking authority expanded, it has done so very differently. Comparing mobilization before and after Brexit, German presence tripled and French presence more than doubled.

However, UK presence increased at a lower pace. This reflects the careful assessment of the lobbying costs and benefits that UK interests are making as well as the need to redirect focus and resources towards Westminster and other targets. 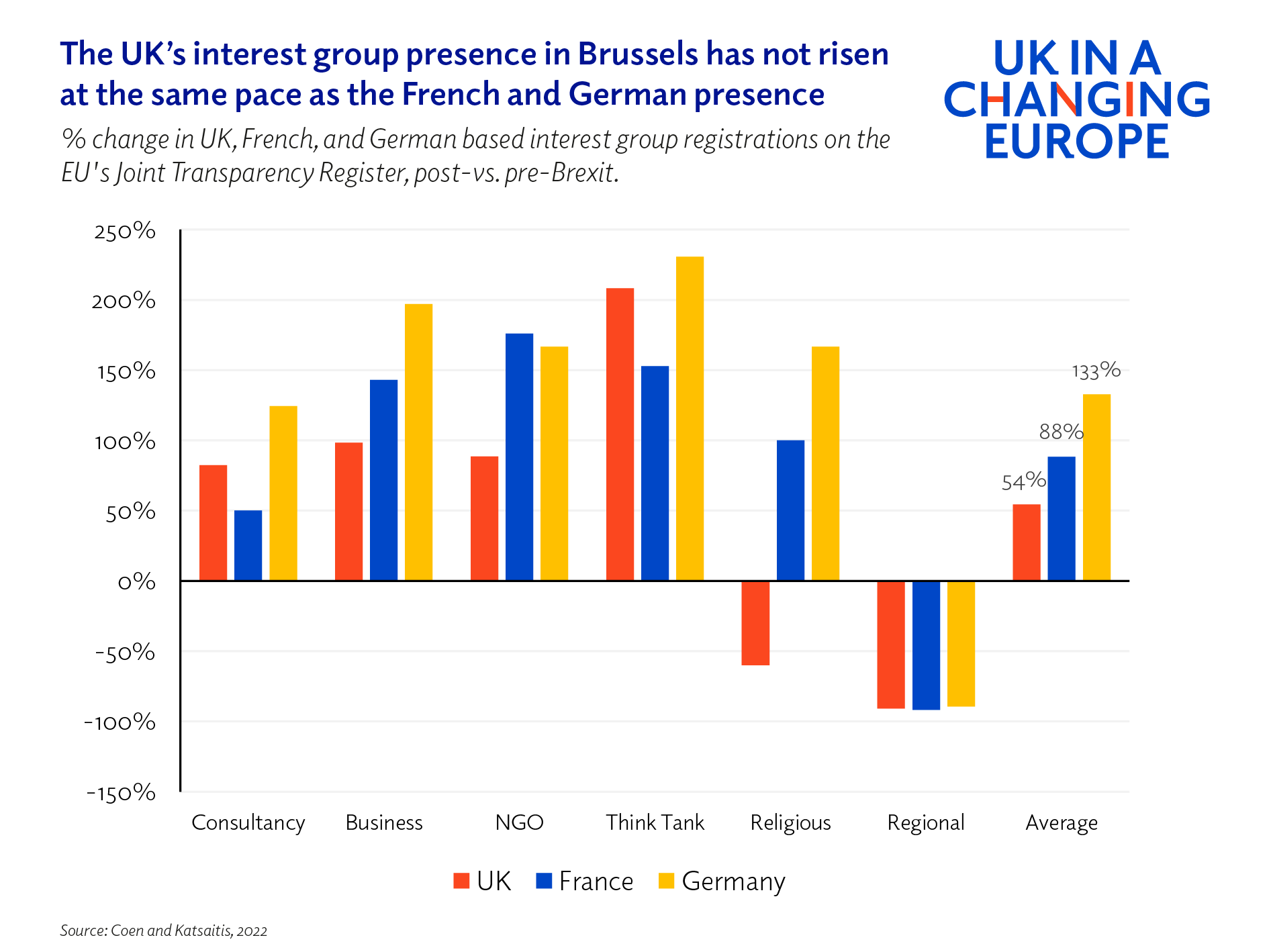 In response to these changes, what can British business do? To begin with, UK business can maintain its relevance and access to EU policymakers through its expertise. Reliable information and expertise provided steadily over time gives interest groups access and builds up trusted relationships with policymakers. UK business has done well in this regard over the last three decades.

In areas where there is more scope for technical discussions, and especially in areas where it leads, UK business can maintain and even reinforce its links and influence in Brussels. Conversely, in more political policy areas and industries with distinct “national champions,” British business will have to focus its CPA activities on Westminster.

Simultaneously, as direct access to the EU’s policymaking process via the institutional route is reduced, access via interest group coalitions offers a viable alternative.

Indicatively, while Michel Barnier and his team held few meetings directly with British private interests, UK business was able to transfer messages via its EU level associations (see Coen and Katsaitis 2021). A similar strategy which aims to maintain and build up current coalitions with other private interests, civil society, and think tanks allows it to maintain access and presence in Brussels.

At this stage, events are still unfolding, making it difficult to offer long-term predictions. In the short to medium term, as EU-targeted lobbying becomes more complicated for UK business, diversifying its activities and mobilization efforts will offer some stability and strategic security. Which options are more effective, will depend on the nature of the policy field and industry characteristics.