The number of cars manufactured in the UK slumped by almost a half in April as firms shut down plants in case of a no deal Brexit that didn’t come, leading to renewed warnings from the industry over the damage being caused by Brexit uncertainty.

A number of UK car plants shut down last month to mitigate the risk of supply chain disruption from a no deal Brexit on 29 March, the original date set for Britain’s exit from the European Union.

While the exit date was pushed back to 31 October, this came too late for carmakers, prompting a ‘dismal’ collapse in output according to the Society of Motor Manufacturers and Traders (SMMT). This came at a time when firms should have been working flat out to produce and ship cars while trade with the EU remained free of tariff and non-tariff barriers.

This was the biggest hit to output since exactly 10 years ago, when the UK economy was reeling from the Global Financial Crisis.  April was the eleventh consecutive month of output falling in the UK, as SMMT figures show: 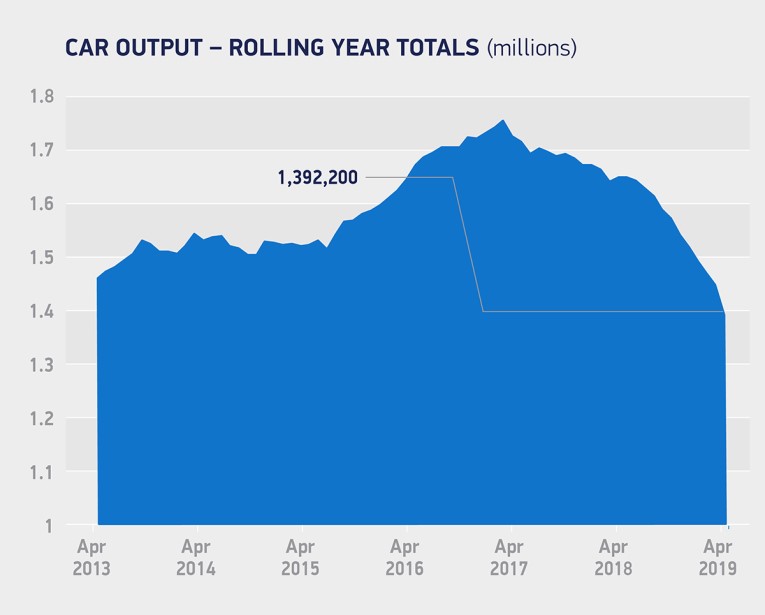 Auto makers had brought forward their annual stoppages – normally scheduled for the summer holidays – and in some cases extended them as part of a range of costly measures, including stockpiling components, training for new customs procedures and logistics rerouting.

These aren’t measures that firms can repeat in November.

Mike Hawes, the SMMT’s chief executive, said that “today’s figures are evidence of the vast cost and upheaval Brexit uncertainty has already wrought on UK automotive manufacturing businesses and workers.  Prolonged instability has done untold damage, with the fear of ‘no deal’ holding back progress, causing investment to stall, jobs to be lost and undermining our global reputation.”

All in all, April’s production figures were another dollop of grim news for UK auto.

So far this year, Nissan has reversed its 2016 decision to assemble the X-Trail SUV in Sunderland, Ford is looking at alternative options to the UK for engine production in case of a no deal Brexit (with Turkey mooted as a possible alternative), and Jaguar Land Rover has announced 4,500 job losses plus a ₤3.6bn loss. Honda’s recent confirmation that it will close its UK assembly and engine plant in Swindon adds to a growing sense of crisis in the UK auto industry.

In total, we’ve seen over 10,000 job losses announced by big auto players over the last year, and that’s before we consider the impact on the supply chain.

There’s a sense that the industry is at a tipping point, squeezed by diesel’s demise, falling sales in China, and Brexit uncertainty hampering growth – plus the need to invest heavily in new technology like electric cars going forward  which is prompting auto industry tie ups on a major scale. The Renault-Fiat merger talks are one example of this.

Investment in UK auto has effectively stalled, down by 80% in the last three years according to SMMT figures, as auto firms sit on their hands given the undetermined outcome of Brexit. The uncertainty over the future of the UK’s trading relationship with the EU means that it is difficult for firms to commit to producing in the UK in the future – and there are big investment decisions looming at both Jaguar Land Rover and Peugeot over their Vauxhall brand at Ellesmere Port, where Astra production ends in 2021.

That’s before we get to Toyota, which began new Corolla production last year at its plant in Burnaston, Derbyshire (an investment decision which goes back before the 2016 Referendum). Like Honda, the plant has been operating below capacity in recent years, and there are big question marks over its future when production of the current Corolla ends in 2024.

THE SMMT has reiterated the risks of no deal bringing tariff barriers for imports and exports of cars, border delays, production stoppages and additional costs through things like stockpiling and form-filling.

In our recent book Keeping the Wheel on the Road: UK Auto post Brexit, Ian Henry of AutoAnalysis forecasts a short-term production hit from a no deal Brexit of at least 175,000 cars a year (that’s not including the Honda closure). Henry notes that in the longer run, that would be much worse as investment in new models in the UK would be lost, a point also explored in our book by Justin Cox and David Oakley of LMC Automotive.

They stress that if decisions on where to build new models go against the UK under a no deal scenario then annual UK auto production could be over 500,000 units lower in the second half of the next decade than under a managed, orderly Brexit Deal.

In short, the stakes for UK auto from ongoing Brexit uncertainty are very high indeed, just at a time when the industry is starting to transform itself towards an electric and autonomous future.

By Professor David Bailey works at the Birmingham Business School.