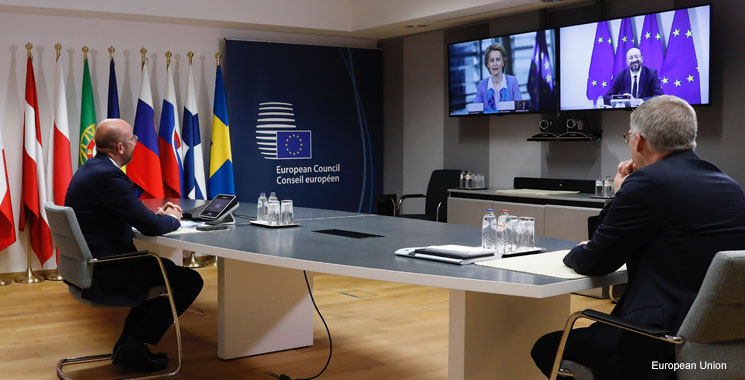 A new optimism followed the high-level conference between Boris Johnson and President of the European Commission Ursula Von der Leyen. In the run-up, the media had already reported an apparent softening of the UK position, as well as pressures on the EU negotiator Michel Barnier from among the EU27 to revisit his negotiating mandate.

Indeed, the fact that the conference took place at all was a positive sign, given London’s warning earlier in the year that the UK would walk away from the talks if insufficient progress had been made in June.

So there’s a renewed urgency, round six is under way and negotiations are set to continue over the summer. Given all this, what are the prospects of an agreement being reached before October, so as to allow sufficient time for its ratification before the transition period ends on 31 December?

A commonality of interests?

There are, of course, strong economic incentives on both sides to reach an agreement. The UK and the EU27 remain important trading partners, and although no deal is a ‘less worse’ proposition now than it was in the context of the Withdrawal Agreement, it would still be disruptive on both sides and exacerbate the economic damage inflicted by Covid-19.

The EU side has a strong economic interest in an agreement that would minimise impediments to trade and ensure stability and predictability in relations with important neighbour.

On the UK side it is important for the government to avoid the further reputational damage suffered on account of its management of the pandemic that it would experience if there was no deal, especially if it were to endanger the supply chains that had survived Covid-19.

However, neither a commonality of interests alone nor strong incentives to cooperate is enough to deliver an agreement.

There might be grounds for confidence if there had been evidence of progress over the preceding five rounds, and a potential landing zone had come into view. As it stands, however, the two sides remain divided on four issues.

The level playing field. The UK wants ‘zero tariffs and zero quotas’ for its exports, while the EU insists on measures, guarantees and dispute settlement mechanisms which would ensure that UK business does not benefit from unfair advantages, such as lower environmental or labour standards, or state aid.

The UK contends that it is asking for no more than the EU offers in other free trade agreements, which the EU rebuts by highlighting the need in the agreement to reflect the UK’s proximity and levels of trade and interaction with the EU, and points to requests, especially concerning services, where the UK asks for more than the EU offers in its other FTAs, including with Canada.

The UK also argues that it would not be able to exercise ‘regulatory autonomy’ if it were to accede to the EU’s demands. The EU, however, will not allow access to businesses from a jurisdiction which has an uncompetitive advantage due to lower standards. Further, London claims that the UK’s democratic and sovereign rights would be infringed by the conditions proposed by the EU. However, any agreement adopted by the UK Parliament could reasonably be deemed to be democratic.

Fish: In this economically marginal, but politically symbolical important, sector, the UK wants an annual negotiation of quotas, based on the principle of ‘zonal attachment’, or the percentage of fish inside a 200-mile around the shoreline.

This is because it estimates that EU-based boats catch around eight times the number of fish in UK waters that UK ships catch in EU waters. The EU wants to maintain continued access to UK waters for EU member states at current levels, and to agree quota shares for up to 25 years.

Data-sharing: The UK wants access to EU Schengen area and Europol databases as part of continued cooperation in internal security. The EU has offered more limited information sharing on the grounds that there are legal constraints on permitting access to outsiders and requires guarantees concerning data adequacy.

Governance: The UK would like a series of mini agreements with the EU to cover the different areas of the Political Declaration. The EU wants a single agreement and a single governance framework.

These are the four areas where compromise is necessary. The deadline for requesting an extension falls on 1 July, but the UK government has ruled out this possibility, and eminent legal authorities, including former EU legal counsel Jean-Claude Piris, do not see any legal route for extending the negotiations after that date. The timescale is therefore extremely short.

The Political Declaration and the Irish Protocol

The negotiations will inevitably be influenced by perceptions of the extent to which the two sides are upholding their obligations under the agreement signed by the UK and the EU last autumn.

The EU in particular will continue to monitor the UK’s compliance with its obligations on the Irish border, especially border arrangements and the systems for managing customs and phytosanitary procedures. These will affect what safeguards the EU considers necessary in any agreement on the future relationship.

No cavalry coming into view

The incoming German Presidency, which starts on 1 July, had led some UK politicians to voice the hope that Berlin will make the rest of the EU ‘see sense’ and compromise its positions so that an agreement can be reached. Angela Merkel sought to quash this speculation last Friday.

Solidarity among the EU27 has been a constant since June 2016, and Berlin has frequently led the chorus in support of the EU negotiator.

The member states’ governments have made it clear that, although they regretted the UK’s decision to leave the EU, they would respect it, and look to negotiate an orderly exit.

Despite their respect and admiration for the UK, the EU comes first. There have been few, if any, signs of fractures: only last month the ambassadors of the EU rejected any call to alter the EU negotiator’s mandate. Warm words about strong bilateral relationships should be read in that context.

Given the scope, scale and complexity of the agreement that both sides said they want, the challenge for reaching a deal is formidable – even with a “tiger in the tank”. Not only must important compromises be made, but they have to be sold to constituencies.

On the EU side, the mandate allows some room for flexibility. For the UK, much will depend on the Prime Minister’s political capital and salesmanship.

By Hussein Kassim, senior fellow at The UK in a Changing Europe.