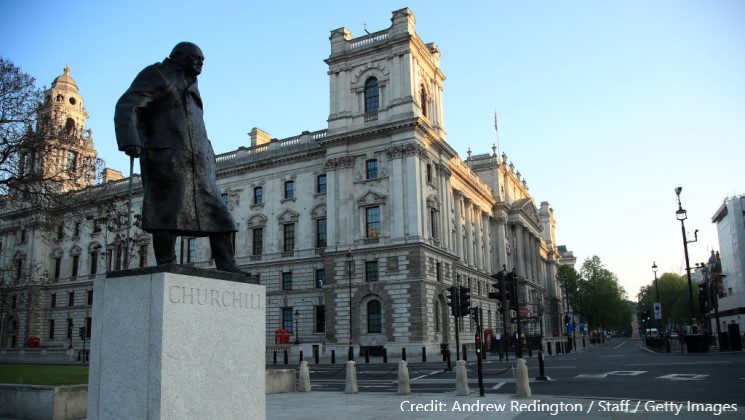 Friday 8 May 2020 marks 75 years since the end of the Second World War in Europe. Victory in Europe (VE) day will be commemorated around the continent, and the lessons learned will be extolled in virtual memorial services and military parades.

On 9 May, there will also be commemorations in Europe to celebrate ‘Europe Day’ and the signing of the Schuman Declaration on coal, steel and iron ore on 9 May 1950, which paved the way for the creation of the European Coal and Steel Community (ECSC) in 1951.

The UK was a prime mover in the victory of the Second World War along with the US, the Soviet Union and British Commonwealth of Nations.

The end of World War II ushered in an era of unprecedented peace and prosperity on the continent of Europe. In practice, the UK always had a semi-detached relationship with the European Communities (EC) and subsequently with the EU.

Churchill once presciently stated that ‘We are with Europe, not of it’. This nicely sums up the UK’s relationship with the EU since it was founded in 1951, even as a member state between 1973-2019.

UK-EU security co-operation after Brexit is, likewise, proceeding according to Churchill’s dictum: the UK plans to tread a different, if parallel, path to its EU neighbours. The UK has been espousing a sovereigntist approach to negotiations with the EU, in the belief that it is standing up for its rights.

On the other hand, the EU considers that it is much larger and more powerful than the UK and that the UK’s negotiation approach is therefore flawed and unrealistic.

The rule goes that the larger the actor the more powerful it is in the world; the asymmetry of power between the UK and the EU is as wide as a chasm. Another problem in the negotiations is that the UK is acting like it is the equal of the EU, which it clearly is not.

This is for domestic consumption and fits with the UK’s self-perception that it is an exceptional state and society in the wider world, rather as France also likes to think of itself.

On the specific issues in UK-EU security co-operation since 2016, there have been several important developments.

First, on Northern Ireland, the UK and EU have serious disagreements on issues related to border checks, customs duty levies on goods or services, whether the EU should open an office in Belfast (the EU is in favour and the UK is not) and on the impact of Brexit on the Republic of Ireland, both economically and in security terms.

The EU is also worried that post-Brexit uncertainties in Ulster might encourage terrorism to return to the island of Ireland two decades after the Good Friday Agreement was signed. The difficulties in discussions on Northern Ireland have been replicated in other areas of UK-EU negotiations.

In trade matters, the UK wants a Canada-style trade deal with the EU, but the EU does not want this given the fact that the UK is a larger European economy on the shores of the Union.

The European Commission believes that the UK should not be able to compete unfairly by lowering prices, labour standards, environmental protection, and working hours protections to undercut EU producers.

This is a legitimate point, but the UK seems determined to break with Brussels rules in these areas to become more competitive – as London sees it – and also to be free of jurisdiction of the ECJ.

This is also an issue of economic security for the EU and the UK.

The EU is worried that the UK will not agree to a level playing field of standards and that it will be forced to offer the UK only WTO rules to enter the EU market and, therefore, higher tariffs to trade. This would be problematic on several levels, including in security terms, especially in a Northern Ireland context.

Finally, it remains to be seen if the UK will extend beyond the transition period deadline of 31 December 2020. The EU would like the UK to do this to avoid the economic double whammy of going onto WTO trade rules and the almost certain economic aftershocks of the Covid-19 crisis on the UK economy.

The UK has said that it will not seek an extension to the transition period, but the UK government has a recent history changing its mind on key issues.

In internal security – relating to freedom, security and justice – the UK and the EU are also at opposite ends of the spectrum. The UK is seeking privileged access to Europol databases as if it never left the EU.

London wants to be a de-facto member of the Schengen Information System (SIS) without being an actual member, to gain access to information on migrants, border security, terrorism and other areas of law and order.

Essentially, Europol and the SIS are large police databases, and to further complicate matters, the UK has also been accused in the past of illegally copying large amounts of materials from Europol databases and sharing it with the US.

The EU regards this not only as illegal, but also a breach of trust, and so the prospects for an agreement in law enforcement and criminal justice are not high. In the end, this is not good for European co-operation in the area of internal security and will make Europe arguably a less secure place.

In terms of the Common Foreign and Security Policy (CFSP) and the Common Security and Defence Policy (CSDP), the UK is more relaxed as these are areas that are not subject to the legal competence of the ECJ.

In practice, London will likely pursue a series of bilateral relationships with Paris, Berlin, Rome, Madrid, and Warsaw.

In particular, the UK will seek to renew bilateral defence ties with France as its preferred bilateral military partner in Europe, based on a renewal of the Lancaster House Treaties of 2010.

Overall, the politicking of the current UK government and its determination to follow its ‘global Britain’ project will lead to a potentially less stable Europe at a time when solidarity is badly needed in the EU context and beyond.

Brexit has not helped UK-EU security and defence relations since 2016 and will arguably continue to have a largely negative impact on the pair’s security relationship in the future.