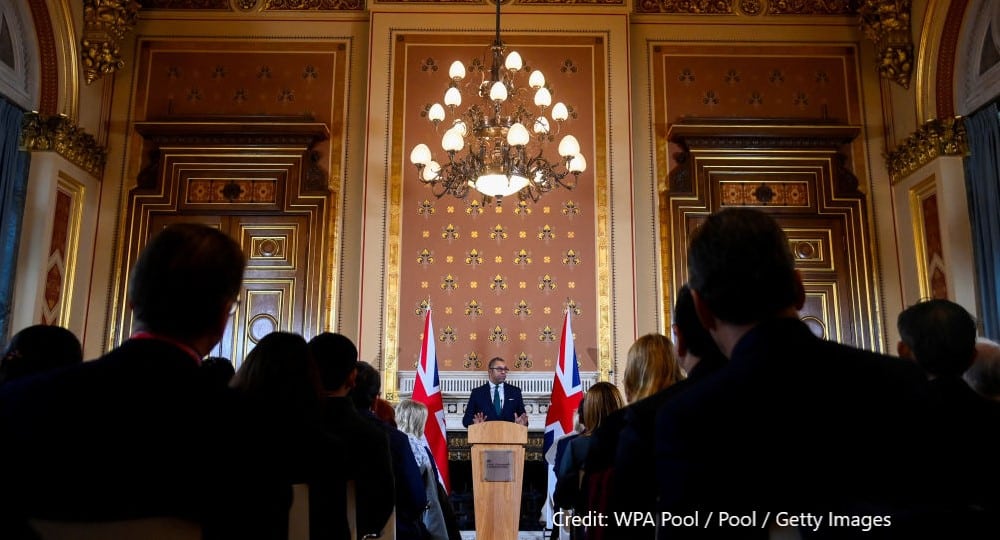 Jamie Gaskarth places recent UK foreign policy speeches by the Prime Minister and the Foreign Secretary in wider context, proposing that the government’s thinking about its international relationships would benefit from a networked approach.

In two weeks, we have had two major speeches on British foreign policy. One by the Prime Minister, at the Lord Mayor’s banquet. The other, by the Foreign Secretary, James Cleverly, at the Foreign, Commonwealth and Development Office.

Before subjecting them to critique, it’s important to note the delicacy of foreign policy speechmaking. Harold Macmillan once said of being Foreign Secretary:

‘Nothing he can say can do very much good and almost anything he may say may do a great deal of harm. Anything he says that is not obvious is dangerous; whatever is not trite is risky. He is forever poised between the cliché and the indiscretion.’

As a result, such speeches often involve contortions and contradictions.

Nevertheless, these speeches do reveal much about current government thinking.

Both articulate a view that we are entering an era of profound competition between states. Gone is the millennial belief that globalisation had eroded the nation state and transplanted it with nonstate and transnational actors.

Both see China and Russia as adopting a long-term approach and assert the need for the UK to do the same.

Both advance a baseline of principles to underpin international order. For Sunak, these are ‘freedom, openness, and the rule of law’. For Cleverly, sovereignty and territorial integrity are ‘core principles behind which I believe every nation can unite’.

Both identify a shift in power to the Indo-Pacific as the most significant geopolitical change in our era.

And both advance partnerships as the key mechanism to increase UK influence. Sunak sets out the central aim of his foreign policy as ‘dramatically increasing the quality and depth of our partnerships with like-minded allies around the world’. Cleverly commits himself to ‘a long term and sustained effort to revive old friendships and build new ones, reaching far beyond our long-established alliances’.

The emphasis on partnerships reflects an important underlying logic of Brexit. Rather than be tied to dense institutional arrangements like the EU, the argument went that the UK would be better served by ad hoc bilateral and minilateral groups that could respond better to crises.

The problem in the current framing of these relationships is it lacks a structured logic. How should the UK decide who it wants to partner with? How does it rank partnerships to ensure this effort maximises UK influence? How might strengthening partnerships in one area have positive or negative effects in others?

The crucial component missing from this discussion is networks. They are often alluded to in a peripheral fashion, as in the Integrated Review, the Defence Command Paper, or Cleverly’s speech on the Indo-Pacific in September 2022, but never in a developed and structured way.

William Hague set out a ‘networked foreign policy’ in 2010, and this led to some fruitful policy developments such as the preventing sexual violence initiative (PSVI). But a fully networked approach to foreign policy, including systematic network analysis of Britain’s relationships has yet to be applied.

Social network analysis (SNA) is a dense body of research; however, it is worth engaging briefly with its key assumptions as this offers a route to understanding how networks shape cooperation internationally (and so provide the context to UK influence attempts).

According to SNA, the networks of world politics are made up of nodes (which can be individuals, firms, groups, or states, depending on the social context) and the ties, or relationships, between them. The strength or weakness of these ties provides a hierarchical pattern or structure. Those nodes with many strong ties will be more central to a network, better able to act as ‘brokers’ or ‘convenors’, meditating between other nodes within and beyond the network.

The social exchange theory of networks posits that members choose partners who can ‘offer the largest net benefits’ and will do so at the expense of ‘less rewarding exchange opportunities with other partners’. As a result, networks tend to have ‘denser exchanges among resource-rich actors’.

Any attempt to engage with a network like the Indo-Pacific, which is geographically distant from the UK, therefore faces challenges. The UK is a peripheral node in this network and its offer to other nodes is modest.

Nevertheless, network theory suggests that ties outside a given network can offer advantages. The more closed a network is, the more nodes receive repetitive feedback and information. In that scenario, ties beyond are important sources of creativity and imaginative potential. Hence, the reason why key nodes in the Indo-Pacific like Japan and Australia welcome technological cooperation with the UK.

Network analysis doesn’t just provide a rationale for existing patterns of cooperation, however, but also highlights the likely linear and non-linear effects of efforts to change them. Focusing too much on bilateral or minilateral partnerships, rather than where these nodes sit within a network, risks missing the unintended consequences of UK interventions.

When the AUKUS deal was announced, it both reinforced security partnerships with Australia and the US, but also caused a major upset with France – a vital European ally, and caused consternation among some ASEAN partners, such as Indonesia and Malaysia.

This underscores the interconnectivity of networks. Strengthening individual partnerships is not strategic unless it is done with an awareness of how this impacts on the specific network that the node inhabits, and its connections with other networks.

As another example, the UK has promoted a trilateral grouping between Poland, Ukraine and the UK. Since Poland has signed a major defence supply agreement with South Korea, that means that this minilateral is now linked to the security of the Korean peninsula.

A further advantage of a networked approach is it can be applied across a range of levels of analysis, from the global down to the individual. Sunak and Cleverly’s analysis in their speeches is almost entirely state-based. As such, it misses the important people-to-people networks that could underpin and enhance interstate relations.

The Anglo-Indian community is the UK’s largest diaspora (and the British diaspora is the largest in Australia). Such relationships can be an important basis for positive relations, just as they were in fostering ties between the UK and US elites in previous centuries.

In short, to engage strategically with other parts of the world, foreign policymakers need a systematic way of understanding the social dynamics of world politics – that is what a networked approach provides.

Forging partnerships and minilaterals is fine, but it should be done with a more explicit analysis and understanding of how they relate to underlying networks, both to maximise UK influence, and avoid unintended negative effects.

By Jamie Gaskarth, Professor of Foreign Policy and International Relations at the Open University.

This commentary is based on a longer, forthcoming piece for a Special Issue on the Indo-Pacific tilt in the RUSI journal titled ‘Strategy, Tactics and Tilts: A Networked Approach to UK Influence in the Indo-Pacific’.

For more on the Sunak government’s foreign policy approach, see Professor Richard Whitman’s analysis ‘Are we seeing the slow death of Global Britain?‘.