The day after the referendum, I wrote the following about UK immigration policy, more perhaps in hope than expectation:

“There is a now a window of opportunity after the referendum to reframe and reset not just policy, but the public debate. The key issue for a large proportion of the UK population who worry about some of the impacts of immigration, but who are not racist or “little Englanders” – the lack of control – will have been addressed. That should allow politicians on all sides to make a positive case for the benefits of migration.”

In a new working paper, published on Tuesday 15 June 2021, I look back on the last five years of UK immigration policy and trends. Just before the referendum, net migration had reached an all-time record.

Indeed, recent analysis from the Office for National Statistics (ONS) suggests that net migration from the EU was close to 300,000, far higher than we thought at the time. However, I argued then that the referendum result and other factors meant that it was likely to fall sharply, and so it has proved. 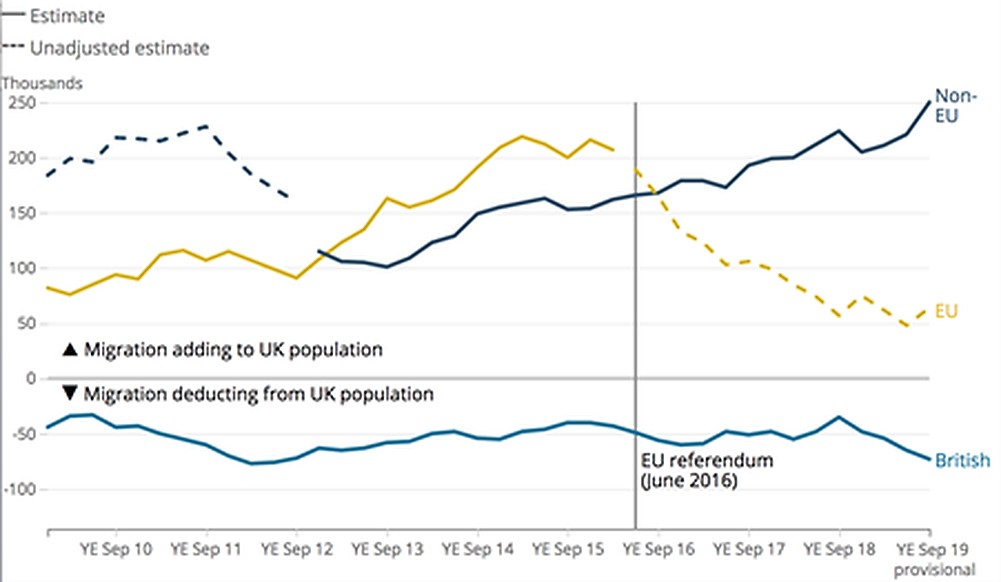 But while EU migration fell sharply, even before the pandemic, the number of applications to the EU Settlement Scheme, which offers EU nationals resident in the UK before January 1, 2021 the opportunity to register for permanent residence, has significantly exceeded expectations.

While the Home Office estimated – based on population statistics – that 3.5 million to 4.1 million people would be eligible to apply to the scheme, well over 5 million have already done so.

This does not change the broad picture – it is still the case that EU migration has fallen very sharply since the referendum, with non-EU migration increasing somewhat – but it is also clear that the importance of EU nationals to the UK economy and labour market was even larger than previously thought.

At the same time, there was also a significant rise in non-EU migration. This substitution was facilitated by government policy, with the cap on Tier 2 visas for non-EU migrants (that is, relatively skilled or highly paid workers) being relaxed, particularly for those coming to work in the NHS, in late 2018, when it became apparent that enforcing the existing cap would further aggravate existing recruitment issues.

And this is reflected in the new migration system introduced in January 2021, which has been shaped by two broad forces.

First, the Government’s commitment to ending free movement and to treating EU and non-migrants similarly.

And second – as I had hoped – significant shifts in both public opinion and government policy towards immigration in general.

Opinion polls suggest that voters have simultaneously becoming both much less concerned about immigration and much more positive about its impacts.

The results can be seen in the new ‘points-based system’ that was introduced on 1 January 2021.

It represents a very significant tightening of controls on EU migration compared to free movement. But it also represents a considerable liberalisation for non-EU migrants, with lower salary and skill thresholds, and no overall cap on numbers. About half of all full-time jobs would be in principle qualify an applicant for a visa under the new system.

So it is not the case that the new system represents an unequivocal tightening of immigration controls.

Rather, it rebalances the system from one which was essentially laissez-faire for Europeans, while quite restrictionist for non-Europeans, to a uniform system that, on paper at least, is expensive but has relatively simple and transparent criteria, and covers up to half the UK labour market.

The new system is likely to lead to a reduction in EU migration, partly offset by a smaller increase in non-EU migration. This will result in a fall in GDP, but the more liberal approach to non-EU migration means that the overall direct impacts on GDP per capita are likely to be small.

Of course, the pandemic and its after effects complicate all this.

Substantial numbers of EU citizens left the UK, as jobs, especially in the customer-facing services like restaurants, disappeared; but we still don’t know how many, although emerging anecdotal reports of recruitment difficulties in these sectors as they reopen suggest the impacts have been large.

In the short term, this is likely to constrain the strength of the recovery, and add to emerging inflationary pressures.

More positively, an additional dimension of uncertainty results from the Government’s decision to offer entry – and ultimately a path to citizenship – to the almost three million British National Overseas passport holders from Hong Kong, and their dependents.

Actual flows will be driven not by UK policy but by developments in Hong Kong, and in particularly whether political tensions escalate further and China intensifies its crackdown on pro-democracy activists. Nevertheless, if hundreds of thousands of Hong Kong residents do come to the UK, it has the potential to be transformative.

So it has been an eventful five years, and the next five promise to be equally so.

In an uncertain economic and political environment after Brexit and Covid-19, joining up UK immigration policy with its broader economic strategy will be a major policy challenge – but also, with new-found policy flexibility and unprecedented political space, a major opportunity.

By Jonathan Portes, senior fellow at UK in a Changing Europe.