UK in a Changing Europe wins hat-trick of awards 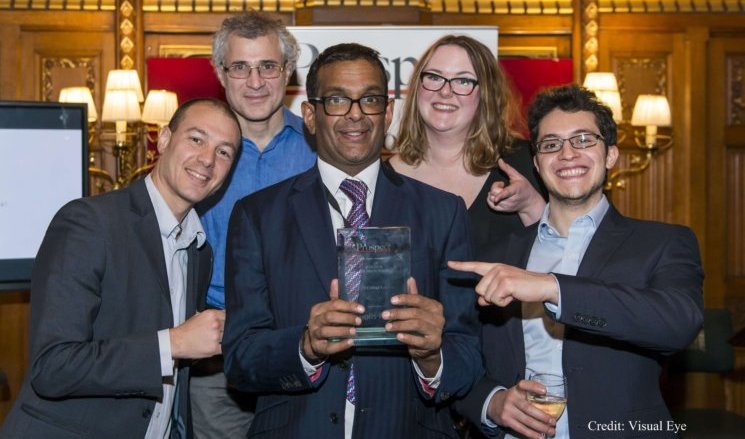 The UK in a Changing Europe and its director, Professor Anand Menon, have won a hat-trick of awards over the last week: Prospect’s ‘UK One to Watch’ think tank of the year award, Political Studies Association’s Political Studies Communicator award and King’s College London’s award for the most significant contribution to public engagement.

On Monday night (28 November) The UK in a Changing Europe won Prospect’s ‘UK One to Watch’ award 2016, which the team collected from Prospect editor Tom Clark at the Speaker’s House in the House of Commons.

The Prospect awards are given in recognition of the work carried out by think tanks across the globe and recognise the most original, influential and rigorous work on the most pressing challenges facing us today.

Prospect noted: “Brexit has, of course, been the defining issue of the year for British politics and The UK in a Changing Europe have put themselves at the heart of the debate by providing timely, rigorous and impartial evidence throughout the campaign and beyond.”

In the UK international affairs category Prospect noted The UK in a Changing Europe has been “brilliant” in framing complex ideas in a way that commands a wide audience.

Prospect went on to write: “Each year, Prospect singles out a new entrant into the British think tank world.

“With 2016 being a year of the unorthodox—and having impressed in multiple categories—the winner of this year’s One-to-Watch category is The UK in a Changing Europe.”

The UK in a Changing Europe said: “We’re delighted and honoured to have won this prestigious award. Since the British people voted to leave the EU our work is needed more than ever.”

The awards pay tribute to those who have made an outstanding contribution to the study and conduct of politics in the past year.

Professor Menon’s work has involved communicating the findings of social science research on the EU to the widest possible audience of non-academic stakeholders, including politicians, civil servants, business, third sector organisations and the general public.

The PSA judging panel applauded: “the skill with which Menon has directed The UK in a Changing Europe initiative, making it an authoritative reference point, as well as communicating beyond the national media and reaching out directly to local communities throughout the country in a series of town hall events.”

Menon said: “I hope, despite the noise we heard about ‘experts’ during the referendum, that our work has shown to MPs, civil servants, journalists, business people, civil society – and indeed to academics themselves – that we have an important role to play in both analysing policy and informing public and political debate.”

Professor Edward Byrne, President & Principal of King’s College London, said: ”The King’s Awards are now in their tenth year, and they’re one of the most high-profile ways in which the university recognises the achievements of members of our community. It really is one of the highlights of the year. Congratulations to all winners and also to those shortlisted.”