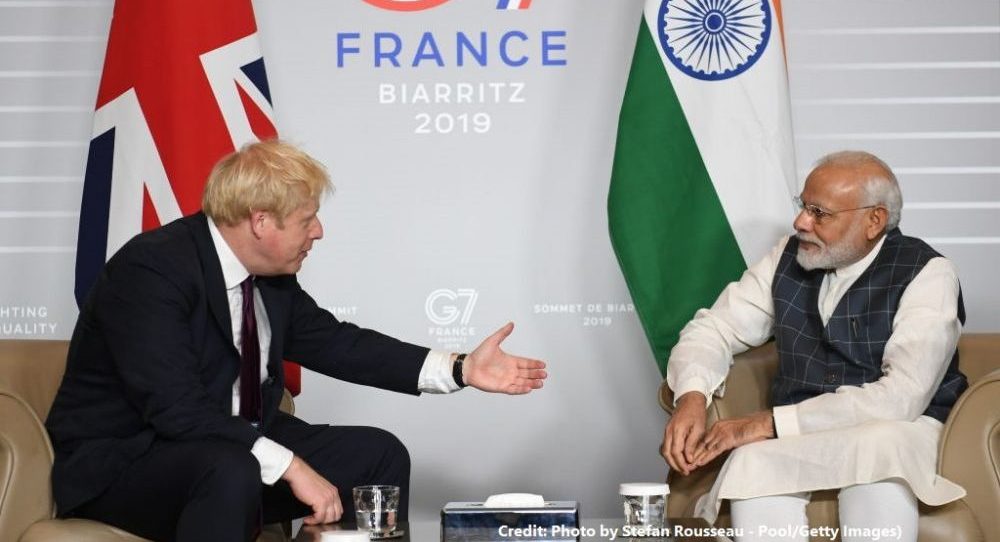 The UK and India plan to sign a free trade agreement (FTA) by the end of 2021. Prime Ministers Johnson and Modi announced an Enhanced Trade Partnership (ETP) for moving towards the FTA at their virtual summit meeting on 4 May 2021.

A FTA with India would be the UK’s first trade agreement with a south Asian country, and it would be India’s first FTA with a major western economy and member of G7.

Worked out by two of the world’s largest economies, the Free Trade Agreement would have a combined market size of nearly $6 trillion with a population of 1.4 billion.

The UK and India are distinct in their views on free trade and engaging in FTAs. The UK’s active pursuit of FTAs is in sharp contrast to India’s scepticism for preferential trade deals.

Since separating from the EU, the UK has signed FTAs with the EU and Japan, and is negotiating with Australia, New Zealand and the US.

It is reviewing the FTAs it has signed in the past, assessing the benefits they have yielded for exporters and domestic industry.

Given the striking difference in their attitudes to such agreements, efforts for a UK-India FTA are noteworthy.

The high energy behind the FTA has much to do with far-reaching changes in global political and economic conditions following the outbreak of Covid-19.

The vision includes people-to-people connectivity, defence, climate, and health, as the key areas for long-term cooperation, besides trade and investment.

The vision reflects the commitment of the UK and India to a comprehensive strategic partnership covering all aspects of a shared existence.

Both countries are looking to each other as valuable allies following the political and economic developments after Covid-19.

Both countries have become wary of China. China’s dominance of global industrial supply chains, highlighted after Covid-19, as well as in supply of cutting-edge technologies like 5G, have created anxieties over it exploiting the dominance for political and strategic gains.

Strategies for counterbalancing China are growing rapidly. The Quad comprising the US, India, Japan, and Australia, and advocating a free and open Indo-Pacific, is a prominent example.

So are some other initiatives like the UK’s efforts to get democracies together on 5G technology; expanding G7 into a global club of democracies; and the Resilient Supply Chain Initiative by India, Japan and Australia.

Containing China by reducing economic dependence is a common goal for both the UK and India. Efforts to widen and deepen bilateral trade relations are only natural.

The ETP will work to achieve a comprehensive Free Trade Agreement that would double the current UK-India trade of £23 billion by 2030.

Much of the ETP will focus on removing market access barriers to ease the flow of goods, services, capital and people between the UK and India.

India will need to chop off more barriers than the UK, as its current tariffs on agricultural and industrial imports are higher than those of the UK.

The UK, for its part, will demand cuts in these tariffs, as well as those on beverages, wines and spirits and automobiles.

The ETP will also work on improving market access for exporters of British fruit (such as apples and pears) to India.

Agreeing on common standards is important for enhancing UK-India trade, and a large part of the future trade will be in education and professional services.

Brisk mobility of students and specialists (e.g. lawyers, doctors, nurses, engineers, accountants, finance and IT professionals) would require regulatory agencies of both countries to mutually recognize qualifications – but problems here seem likely, given the lack of such recognitions in the UK-EU trade agreement and in India’s other FTAs.

Removing market access barriers will be tough. India’s protective attitude towards domestic agricultural producers will come in the way of tariff cuts.

Similar protective instincts will try to retain the current barriers in India’s legal and accounting professions that disallow foreigners.

India will want the UK to liberalize visa rules for easier entry of tourists, students and skilled workers.

Fast progress on a migration and mobility partnership, and a social security agreement, will be high on India’s demands from the free trade agreement.

The UK’s spirited move on an FTA with India comes barely two years after it commented that India is not one of the topmost priorities for a deal.

India, too, has shrugged off its reticence to engage in talks for an FTA. Covid-19 has played a huge role in such alacrity.

The pandemic’s geopolitical impact has driven home for both the UK and India the importance of working together as close allies. In doing so, they have a significant opportunity for expanding economic ties.

AstraZeneca and the Serum Institute of India (SII)’s collaboration on the Covishield vaccine exemplifies the opportunities created by Covid-19.

The SII’s investment of £240 million in the UK for making vaccines underscores the synergies between both countries in expanding trade in health products.

This is also visible from the announcement of the UK’s export of pharma products and medical equipment to India.

Both the UK and India realize the importance of being prepared for living with Covid-19 in the foreseeable future.

Vaccines, medicines and healthcare services are essential for such coexistence in both countries.

Equally important are efforts to change industrial processes and living habits to sustainable and environment-friendly forms.

Trade collaboration through the free trade agreement can help both countries in fighting Covid-19, ensuring healthy living and inculcating sustainable industrial practices. They must ensure that protective tendencies do not hinder these prospects.

By Amitendu Palit, Senior Research Fellow and Research Lead (trade and economics) at the Institute of South Asian Studies in the National University of Singapore.