UK manufacturing welcomes the deal in as far as it goes 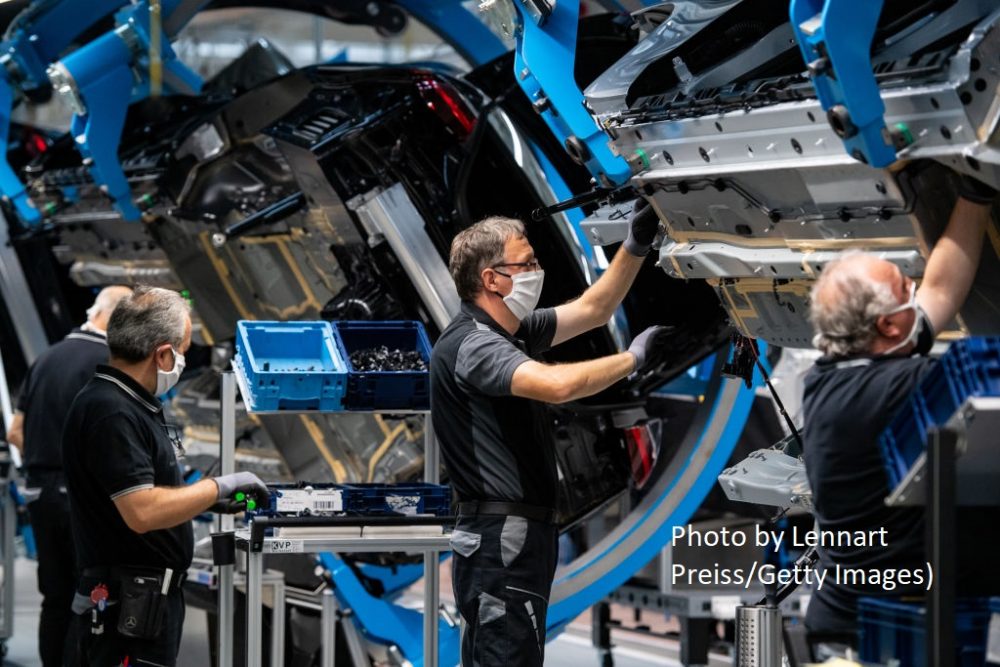 Making things still matters. Manufacturing formally accounts for only around 10% of the UK economy and 9% of private sector employment.

However, it provides close to half of UK exports, around 60% of private sector investment and employment in research and development, very substantial demand for products and services from other sectors, and has higher productivity and wages than average.

Taken as a bloc, the EU is the UK’s largest trading partner, accounting for 46% of UK goods exports and 53% of goods imports.

Some manufacturing sectors, such as automotive and aerospace, are highly integrated into EU-wide supply chains, as our recent UK in a Changing Europe report highlighted. Intermediate goods often criss-cross the borders of various EU countries (and also the UK) multiple times as they are shipped from factory to factory to undergo various value adding processes, before being assembled into final products. The latter in turn could be sold in any EU country.

In many cases, sectors such as chemicals need such intermediate goods delivered ‘just-in-time’ to save on the costs of stockpiling.

Disruption to such links after the end of the transition is likely to have a negative effect on goods trade between the UK and EU, even with the trade deal that has been agreed.

That deal has been welcomed by manufacturers for avoiding tariffs and quotas in some sectors like automotive (as long as rules of origin requirements are complied with).

Tariffs of 10% on cars, for example, could have prompted major disinvestment in the UK.

Instead, there is now hope that plants in the UK such as Vauxhall at Ellesmere Port can win new model investment, securing jobs.

And yet. This is still at the hard end of the spectrum of possible Brexit outcomes.

Even with the trade deal, Brexit will create lots of extra hassle and costs for manufacturer, whether in terms of customs delays affecting just-in-time systems, customs declarations, complying with rules of origin requirements, EU customers switching to other suppliers, regulatory differences and more.

How these are dealt with will be critical for many manufacturers, especially smaller firms in the supply chain, many of which are ill-prepared for things like customs declarations.

Even with the trade deal, manufacturers will want clarity on a range of areas going forward. Think of data protection after Brexit, data sharing within the chemicals sector, whether various UK regulatory agencies will be set up on time to take over work from their EU counterparts, post-Brexit trading relationships with some third countries with which the EU has free trade agreements, and so on.

On data flows, a temporary six-month agreement has been agreed to keep the current rules in place until a new ‘adequacy decision’ is sorted.

Meanwhile, the chemicals sector has expressed relief that the trade deal has avoided tariffs in the sector, but is concerned over the uncertainty around what regulatory framework will be adopted post-Brexit, when the UK leaves the EU’s chemical regulatory framework (REACH).

Although the UK government highlights possible regulatory divergence as a benefit of Brexit, at the moment industry sees it solely as a cost, given that it has invested heavily in the complying with the current framework.

A specific chemicals annex to the deal was short and did not secure access for British firms and authorities to the REACH database, in turn suggesting duplication of work and a big bill (in the hundreds of millions of pounds at least) in setting up the new UK regime.

Some of the final sticking points in getting a deal over the line were over rules of origin and also on batteries for electric vehicles.

On this, the UK Government’s summary document highlighted that ‘full bilateral cumulation (cumulation of both materials and processing) between the UK and the EU, allowing EU inputs and processing to be counted as UK input in UK products exported to the EU and vice versa’ had been agreed.’

On first inspection, this is good news for parts of UK manufacturing such as the automotive industry. There is full bilateral cumulation allowing UK and EU parts to count towards local content rules in enabling goods like cars to avoid tariffs.

Nevertheless, Japanese assemblers like Toyota and Nissan will want to see the fine print of the agreement.

So UK manufacturing will welcome the deal in as far as it goes. After all, a thin deal really is better than no deal for the sector.

Nevertheless, the UK will still need to consider various industrial policy measures to both mitigate the negative impacts of Brexit and to support UK manufacturing.

This could include more collaborative working between government and industry to identify challenges and opportunities; transferring more power to the UK’s regions and devolved institutions to ‘do’ industrial policy; to more firmly integrate skills, R&D, financial, advisory, and other policies, and to use them to target specific sectors or regions; and in particular to help firms take advantage of new technologies that are part of the fourth industrial revolution.

This would require something of a ‘policy reset’ moment by the UK government, with a need to invest more into an industrial policy.

The bottom line is that the deal will still make trade with the EU more difficult, negatively affecting UK manufacturing.

A more supportive policy for manufacturing is likely to be needed going forward to help compensate manufacturing for some of the extra costs it will face.

By David Bailey and Ivan Rajic both work at the Birmingham Business School and are supported by The UK in a Changing Europe.