UK MEPs lose most in the European Parliament 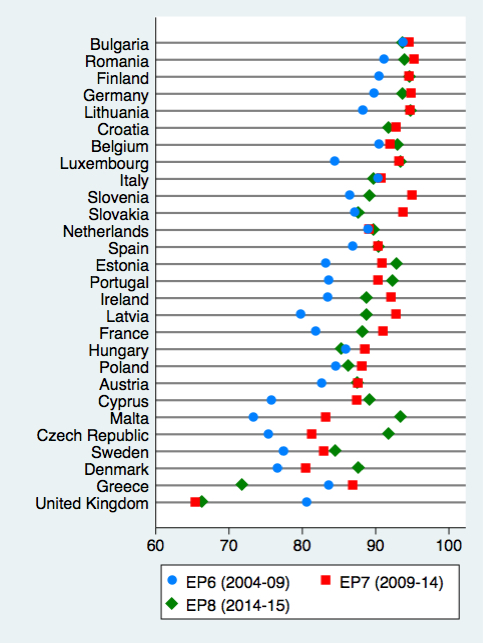 In recent posts I have looked at policy outcomes, voting records and policy-makers’ connections to analyse whether the UK is ‘marginalised’ in the EU Council. But, the Council is only half of the EU’s bicameral legislature.

From these records we can see whether UK MEPs and parties tend to be on the winning or losing side in votes, and whether our MEPs and parties vote with or against the European political groups to which they belong.

Figure 1. per cent of times on winning side in the European Parliament, by member state

To start with, figure 1 shows the percentage of times each member state’s MEPs were on the ‘winning side’ in all votes in EP6, EP7 and EP8. The first thing to note is that the average is high: about 85%. This is because many votes are highly consensual.

Nevertheless, there is significant variation between the member states: from 93% for Finnish MEPs (and even higher for Bulgarian and Romanian MEPs, who joined in 2007), to only 71% for British MEPs. Also, while British MEPs were reasonably successful in EP6, since 2009 they have been less likely to be on the winning side than the MEPs from any other member state.

But, voting in the European Parliament is mainly along political group lines not national lines, with higher group voting cohesion than the Democrats and the Republicans in the US Congress. Hence, what determines whether an MEP is on the winning or losing side is which political group they belong to and whether they follow the group’s voting positions.

Figure 2 hence shows the ‘winning rates’ of the political groups, from left to right. Although the Liberals (ALDE) where the third largest group in EP6 and EP7, and are the fourth largest in EP8, they have been on the winning side most frequently because they are pivotal: critical for a winning majority either on the left (with S&D, G/EFA, and GUE) or on the right (with EPP and UEN or ECR).

The two largest groups either side of the Liberals (S&D and EPP) also play a dominant role (on the winning side almost 90% of the time), while the groups further to left and right are significantly less likely to win votes.

Figure 2. per cent of times on winning side in the European Parliament, by political group (Left to Right) 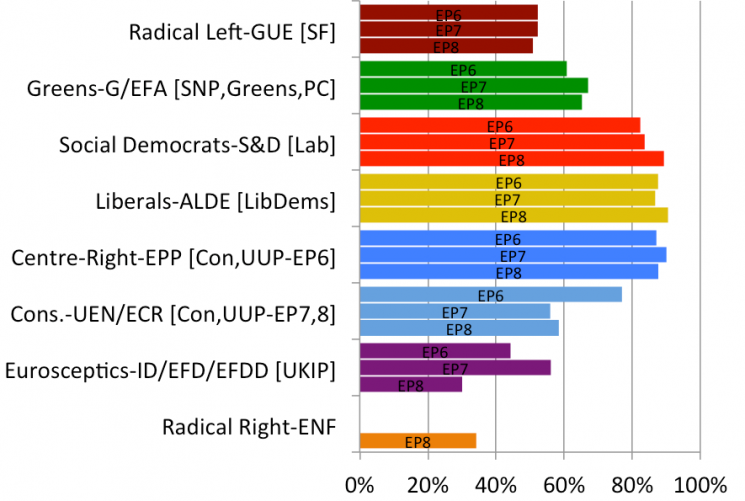 Only the Labour Party (in S&D) and the Liberal Democrats (in ALDE) sit in these dominant groups.

Then, within their political groups, UK MEPs often vote against their groups’ positions. As figure 3 shows, in 2009-14 the Conservatives, who dominated ECR, voted with the group majority in almost every vote.

In 2004-09, though, when the Conservatives were in EPP, they only voted with the EPP majority 74% of the time. Is being the dominant party in a marginalised group (ECR), better than being a marginalised party in a dominant group (EPP)?  Not sure.

Meanwhile, in 2009-14, Labour MEPs often vote against the S&D position, as did Ukip in EFD, and SNP in G/EFA. Only the Lib Dems and Greens were more likely to follow group instructions than the average member of their groups. 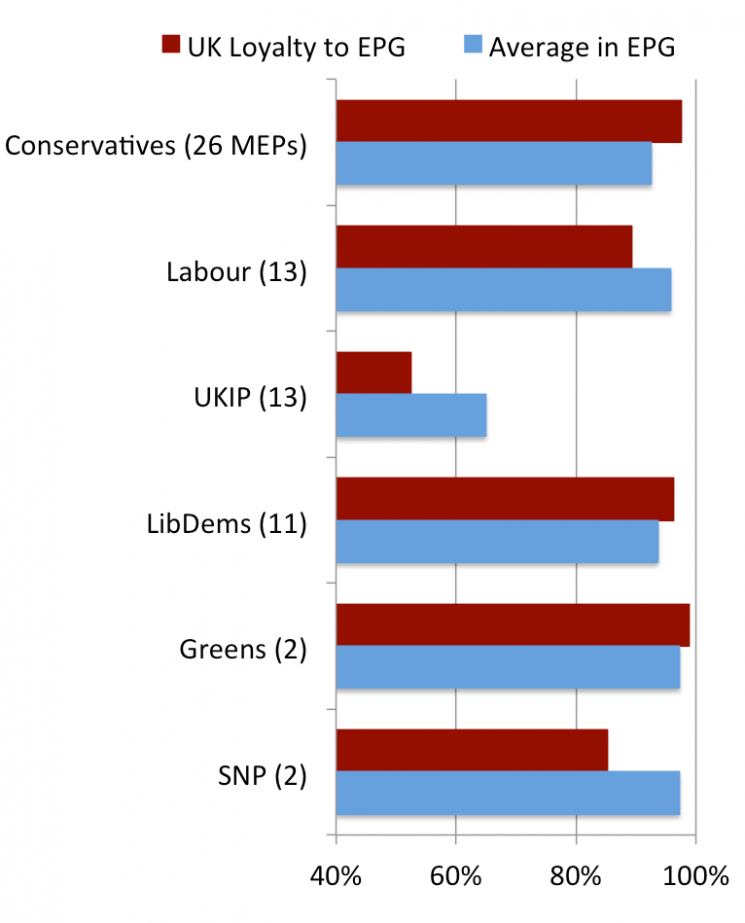 Note: This figure only shows MEPs from parties that had at least 2 MEPs in the 2009-14 session and were members of a political group.  In addition to these MEPs, there was 1 MEP from Plaid Cymru (in G/EFA), 1 UUP (in ECR), 1 Sinn Fein (in GUE), and 2 BNP and 1 DUP (who sat as non-attached members).

Another way to see the challenge for British parties is to compare them to parties from the other large countries plus some of the UK’s allies in the Council (Netherlands, Sweden, and Denmark) – see figure 4.

The combination of sitting in a marginalised group (ECR and EFDD) plus voting against the position of the majority of a group (Labour in S&D) means that UK parties are considerably less likely to be on the winning side than other national parties.

The only exception are the UK Lib Dems, who where an influential party in the pivotal group before they lost all but one of their MEPs in 2014. Interestingly, though, some parties from the UK’s allies are also relatively marginalised.

Figure 4. per cent of times on winning side in the 2009-14 European Parliament, by national party 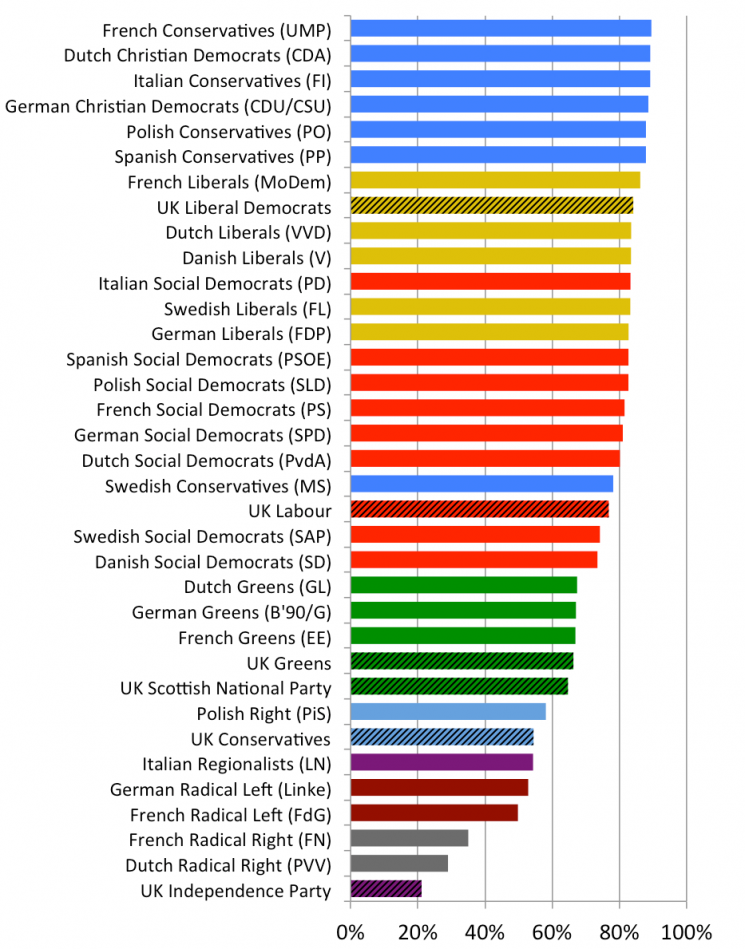 Note: A national party was calculated as being on the ‘winning side’ in a vote if the plurality of the MEPs from the party voted the same way as the majority of all MEPs in the vote. The parties are coloured according to their political group membership. UK parties are indicated with stripes.

And even when they do sit in these groups – such as the Conservatives in EPP before 2009, and Labour in S&D – British MEPs are often opposed to the majority positions of these groups. As a result, British MEPs often find themselves on the losing side in key votes.

Nevertheless, these roll-call voting patterns do not tell the full story. How much do these patterns vary by policy area? And do UK MEPs capture some of the key agenda-setting positions in the European Parliament, such as committee chairs or rapporteurships? I will address these questions in the next two blogs.

[1] Not all votes in the European Parliament are by ‘roll-call’. Since 2009 all ‘final votes’ on legislative bills have been by roll-call, and a roll-call can be requested on any other vote by a political group or at least 40 MEPs (out of 751). These are low thresholds, which means that practically all important issues are held by roll-call: