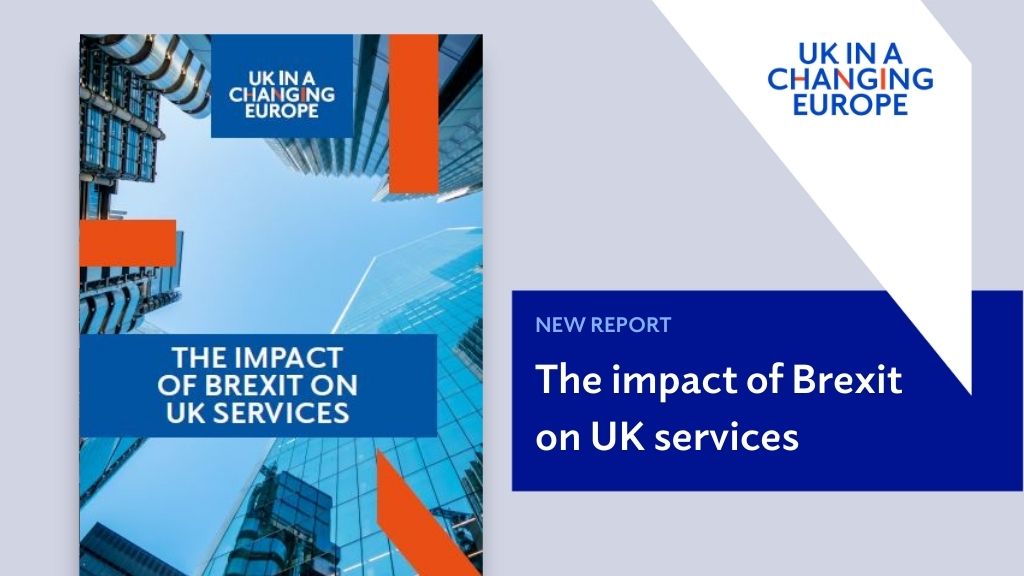 The UK’s services sector is suffering from the barriers imposed in the Trade and Cooperation Agreement concluded with the EU in December, a new report from UK in a Changing Europe has found.

Before Brexit the UK ran a trade surplus with the EU in services and, the EU was typically the destination for around 40% of UK services exports.

The report, The Impact of Brexit on UK services by Professor Sarah Hall and Dr Martin Heneghan of the University of Nottingham, details the new impediments to trade that the sector faces. These include a loss of single market access for financial services and more difficult and costly travel to the EU that has particularly impacted touring artists to date

Whilst the impacts of the COVID-19 pandemic have reduced services trade internationally, the UK services sector has faced particular challenges post Brexit. Recent figures from the ONS show that UK services exports globally were down around 14% in quarter 2 2021 compared to the same quarter in 2019. The equivalent figure for EU exports over the same period is close to 30%.

At the time the TCA was agreed, some business organisations hoped that it would pave the way for further agreements to remove or reduce some of those new barriers, but the report finds little sign of this happening.  Most of the UK asks for the services sector were rejected by EU negotiators last year.

The services sector has also been hit by the need to adapt to the new post-Brexit migration regime.  EU workers make up more than 1 in 8 of the workforce in haulage and hospitality. These sectors have struggled to fill vacancies as the economy has reopened following COVID restrictions. For example, whilst job adverts in the hospitality sector have increased by around 20% in the two years to July 2021, applications fell by around 35% over the same time period.

Although the agreement provides for dialogue on financial services and the mutual recognition of professional qualifications, so far nothing concrete has come from that.  Indeed, in the area of financial services, the report judges that the UK has now been forced to accept that the EU will not give any of the outstanding equivalence decisions and has left the UK with less access to the EU market in financial services than the US or Singapore. This is becoming evident in the trade figures. Over the past two years, exports of financial services to non-EU countries increased by around 5% but decreased to EU countries over the same period by 30%.

The Chancellor has embarked on a series of changes to make the UK an attractive destination for global capital – in green finance, fintech and by looking to conclude a new cooperation agreement with Switzerland.  That means the UK is moving away from EU rules – and makes any equivalence decision less likely in the future.

Although the TCA allows progress to be made on recognising professional qualifications (important for professions such as accountancy and architecture), such progress has been absent to date. It is too early to assess how the business and professional services sector, which is worth more than financial services, will adapt to the new more restrictive mobility regime.

The UK’s trade deals have thus far failed to yield any significant breakthroughs in liberalising trade in services.  This is not a surprise – trade deals rarely do much for services – but it had been one of the UK’s major objectives in pursuing an independent trade policy.

Commenting on the report, author Professor Sarah Hall, Senior Fellow at UK in Changing Europe said: “the combination of new trade barriers with the EU and the impact of the ending of free movement have made this a difficult year for those trying to export services from the UK.  But the further it goes in diverging from EU rules, the less likely improved access in the future becomes.

Businesses suffered last year from the uncertainty over what would be negotiated in the TCA.  The government now needs to give them as much certainty as possible over its future direction ”.

Professor Anand Menon, Director of UK in a Changing Europe, added: “The thin deal the UK agreed has stayed thin and hopes that negotiators could fill in some of the blanks have been dashed.  That is no surprise – the EU is using Brexit to take market share in services away from the UK”.

The full report, The Impact of Brexit on UK services, is available to read and download here.