UK trade in the wake of Brexit 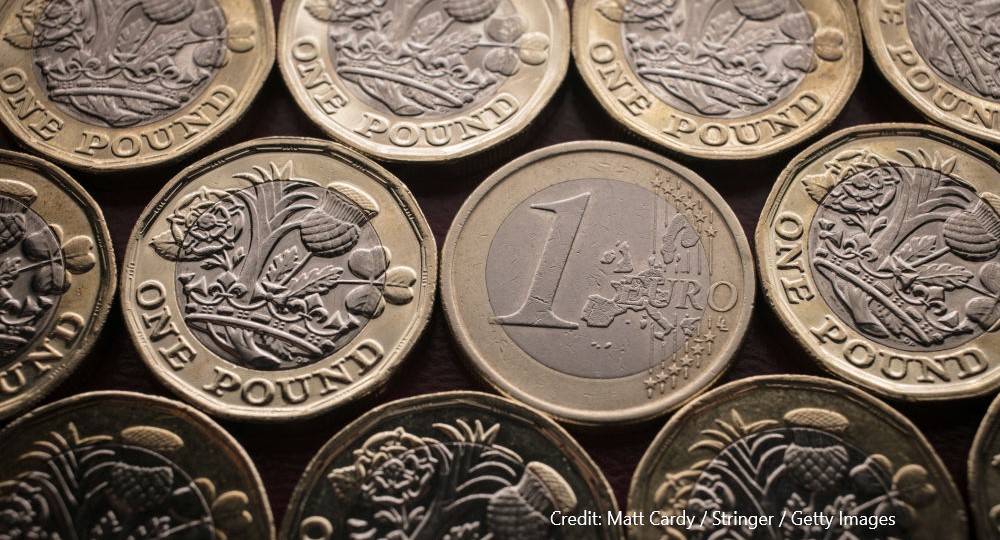 The impact of Brexit on UK trade is highly contested. This blog summarises the findings of new research on how Brexit has affected the UK’s goods trade with the EU relative to the rest of the world.

The UK’s trade relations with the EU did not change until 1 January 2021 when the Trade and Cooperation Agreement (TCA) came into effect. Under the TCA, UK-EU trade remains tariff- and quota-free, but the UK is no longer a member of the EU’s single market or customs union. Consequently, the TCA has increased trade costs between the UK and the EU.

We studied both the period between the Brexit referendum and the end of 2020 (when there was uncertainty over what form Brexit would take) and the first year of trade under the TCA.

We found no evidence that Brexit reduced the UK’s trade with the EU relative to the rest of the world prior to the implementation of the TCA. However, the introduction of the TCA resulted in a major disruption of UK-EU trade.

We estimated that the implementation of the new trade relationship led to a sudden and persistent 25% fall in UK imports from the EU, relative to the rest of the world. In contrast, we found a smaller and only temporary decline in relative UK exports to the EU. Nevertheless, there was a sharp drop in the number of trade relationships between UK exporters and EU importers, which suggests that the introduction of the TCA caused many UK firms to stop exporting to the EU.

The main challenge in conducting this research was to disentangle the Brexit effect from other causes of changes in trade. For example, if Covid-19 caused import demand to fall more in the EU than the rest of the world, the UK’s relative exports to the EU may have declined for reasons unrelated to Brexit.

To address this challenge, we compared growth in the UK’s trade with the EU to the UK’s trade with the rest of the world, and to US and EU trade with countries other than the UK. This approach allowed us to account for changes in exporter supply and importer demand conditions in the UK and abroad and, consequently, to isolate how Brexit has affected relative UK-EU trade. In addition, to ensure our estimates are not biased by changes in the sectoral composition of trade, we used product-level trade data for around 1,200 products.

Figure 1 shows our main results for UK exports to the EU (Panel (a)) and UK imports from the EU (Panel (b)). For each quarter from 2013 Q1 to 2021 Q4, we plotted the estimated percent change in the UK’s trade with the EU relative to the rest of the world, compared to the pre-referendum period of 2016 Q2. The shaded grey area shows the 95% confidence interval for the estimates, to indicate the degree of uncertainty about their precision. 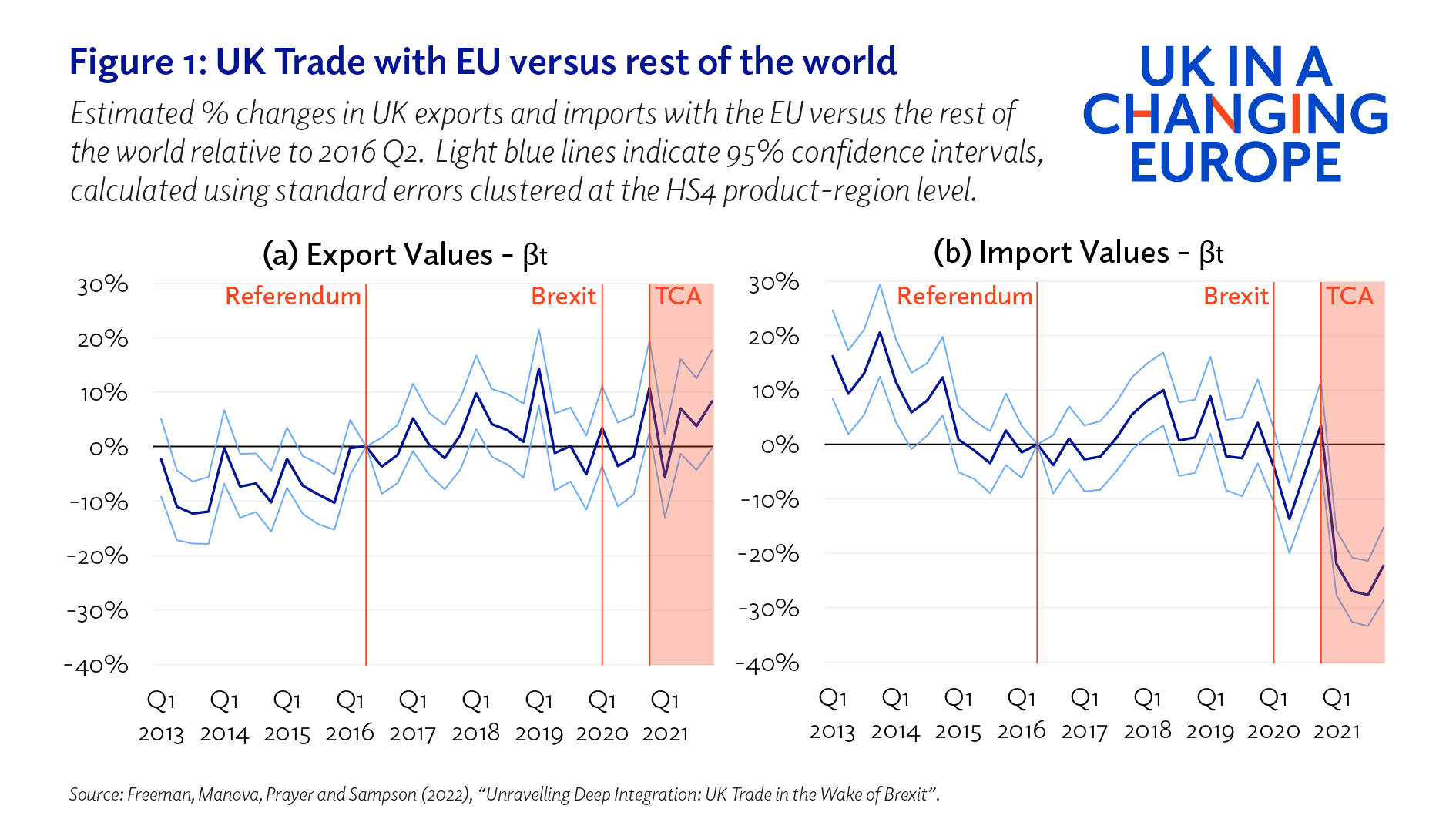 Panel (a) shows that, although relative exports to the EU fluctuated from one quarter to the next, there is no sign that Brexit led to a sustained change in the geography of UK export values, either following the referendum or after the introduction of the TCA. Total UK export growth compared to that of other advanced economies was weak in 2021, but our analysis suggests that this weakness cannot be explained by a decline in relative exports to the EU.

It is surprising that the TCA had a greater effect on imports than exports in 2021, particularly since the UK delayed the introduction of many customs checks on EU imports until 2022.

Further analysis shows that the implementation of the TCA reduced the number of trade relationships between the UK and the EU. Figure 2 plots the estimated effects of Brexit on the count of products traded with each country in the EU per quarter, using the same approach as in Figure 1 to isolate the ‘Brexit effect’. 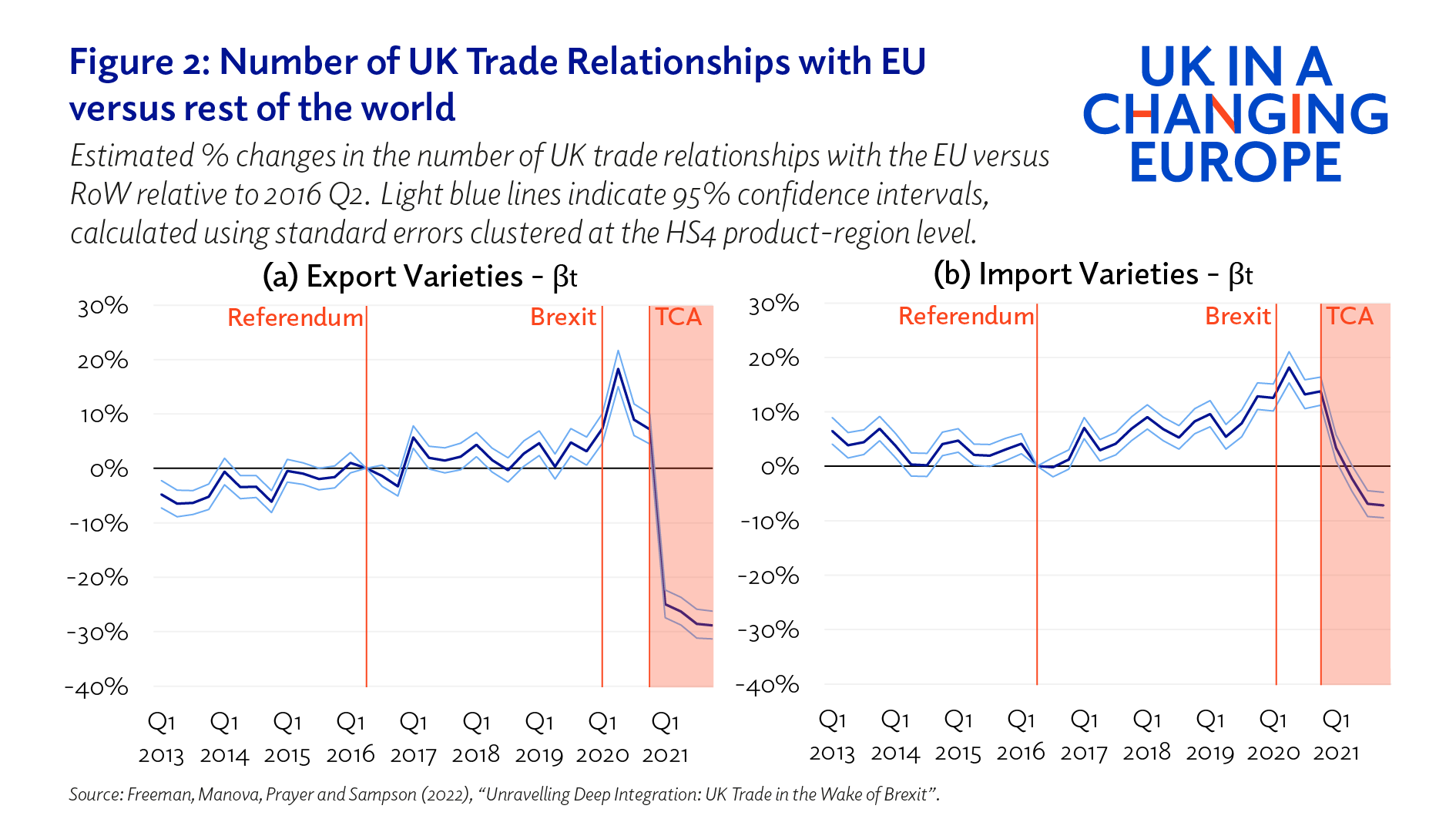 The results in Figure 2 imply that the apparent stability in the relative value of UK exports to the EU under the TCA masks a steep decline in the number of export relationships. Consequently, it would be a mistake to conclude that UK exporters were unaffected by the introduction of the TCA. Instead, we conjecture that the TCA has increased the fixed costs of exporting to the EU, causing small exporters to exit small EU markets, but not (or at least not yet) severely hampering exports by the large firms that drive aggregate export dynamics.

Although our analysis provides a rich picture of how Brexit has affected UK trade so far, some caveats are in order. We only studied the first year of trade under the TCA, we only considered trade in goods, and our estimation strategy is designed to capture the direct effect of Brexit on the UK’s trade with the EU relative its trade with the rest of the world. We did not analyse whether Brexit has indirectly affected the UK’s trade with the rest of the world through general-equilibrium adjustments or supply-chain linkages. We plan to update our findings and expand our analysis along these dimensions as more data become available.