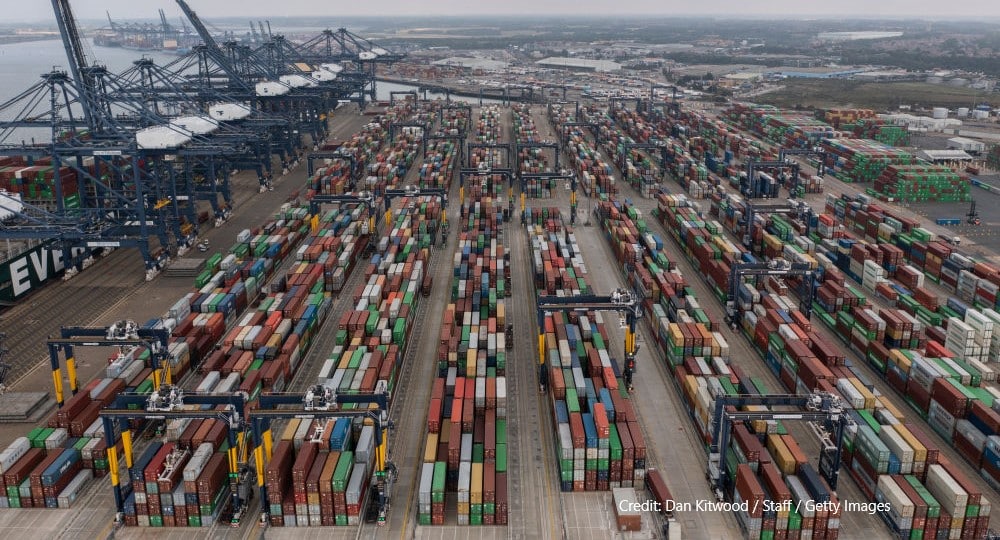 Stephen Hunsaker analyses the latest data from the Office for National Statistics’ monthly UK trade report, highlighting the key trends in terms of imports and exports and the impact of trade deals and gas prices. This forms the first in a series of UK in a Changing Europe trade trackers.

The Office of National Statistics (ONS) released its monthly UK trade report for August 2022 earlier this month. The report detailed record high levels of imports (mainly due to increasing gas prices), a widening trade deficit and the limited effects of new trade deals.

The report saw imports rise more than exports, further widening the UK’s trade deficit. Since the end of the Brexit transition period on 31 December 2020 non-EU imports have surpassed EU imports into the UK. Non-EU imports increased sharply (13%) in August. It was the highest level of imports from non-EU countries since records started in January 1997 (see figure 1). The high level was primarily due to high gas prices. 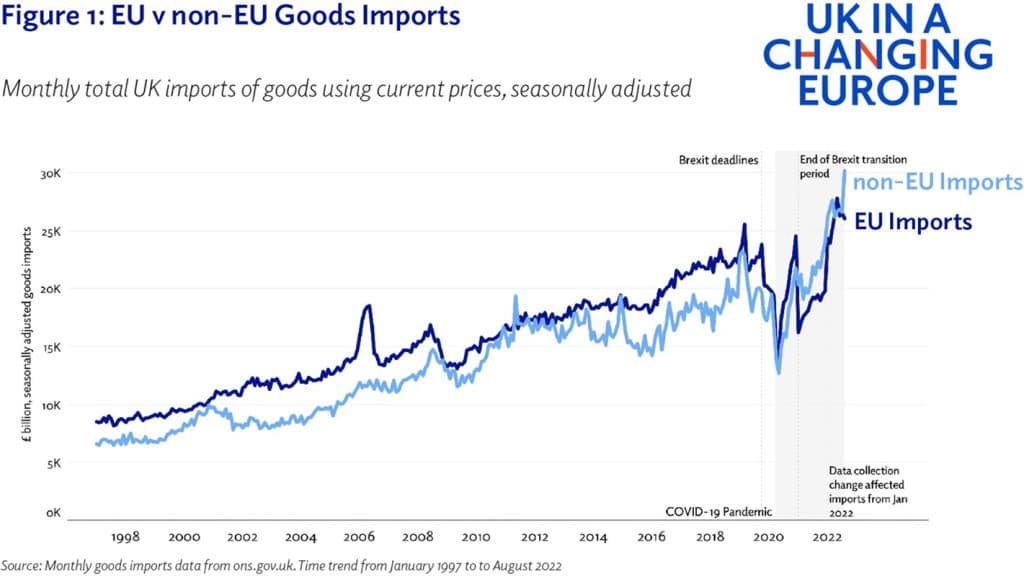 The ONS explained in their monthly report that several factors – the UK leaving the EU and the transition period that followed, the COVID-19 pandemic and the subsequent supply chain disruptions, and the looming global recession – ‘have caused higher levels of volatility in trade statistics in the past two years’. After relatively stable import and export levels, the anticipation of a no-deal Brexit caused non-EU exports to rise. A spike in imports from the EU, driven by stockpiling (see figure 2), occurred before the end of the transition period on 31 December 2020.

However, while this negative impact on overall trade is consistent with pre-Brexit forecasts, these trends have not shown what some economists predicted, a shift from EU to non-EU trade. Instead, EU and non-EU trade appear to have displayed broadly similar trends. This remains a puzzle, given the new non-tariff barriers to trade with the EU. 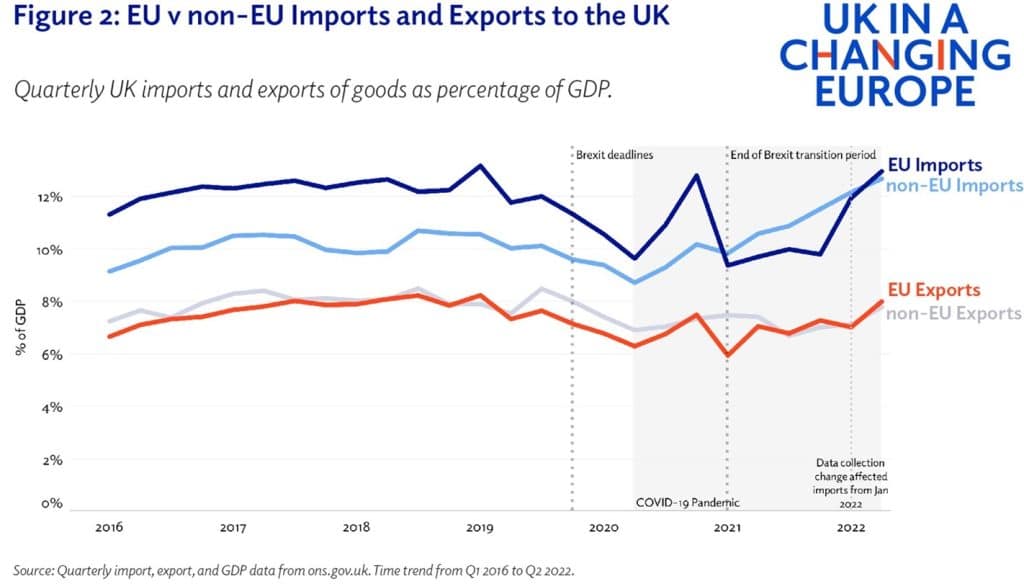 While overall trade volumes have recovered, the UK’s trade performance has been poor relative to other advanced economies since Brexit. Among G7 countries, the UK has performed the worst since the end of the transition period (see figure 3). Broadly consistent with the data so far, the OBR projected in its March 2022 forecast that imports and exports will be around 15% lower in the long term due to the UK leaving the EU. 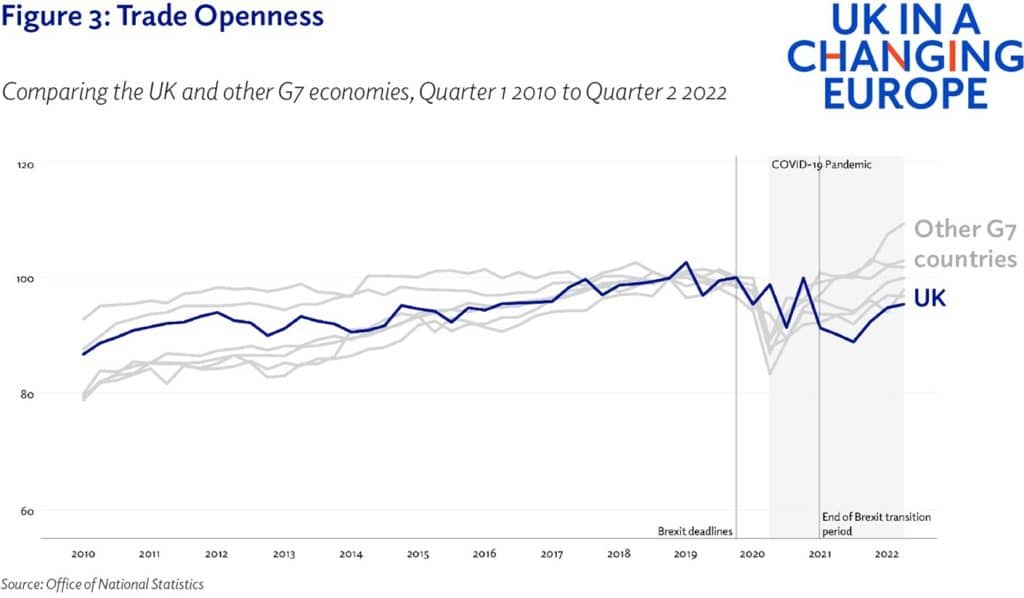 The trade deals that have already been signed are mostly with trade partners that have deals with the EU. Most of these deals are rollovers of existing arrangements, although there are some marginal improvements. Beyond this, a key potential opportunity resulting from Brexit was new trade agreements with non-EU trade partners who did not have EU trade deals, such as the US and India. Yet, although the UK has concluded a deal with Australia, progress on these much more critical deals has not looked promising. On 20 September 2022, Liz Truss stated that no US trade deal was on the horizon. As the UK’s largest non-European trade partner overall, the US is a key potential target. However, the US has been unwilling or unable to sign a trade deal under the previous or current administration. While a trade deal with India is much closer, recent deadlines have been missed, and it looks uncertain when and if it will be finalised.

The OBR cautioned against promises of new trade deals, such as those with the US and India, having ‘a material impact’ on economic growth and stated that even if these deals go through, they might not have a transformational impact but instead warned that ‘any effect will be gradual’. In the end, as the OBR has cautioned, these deals will not make a material difference in trade and will not make up for the lost trade from the EU.

Higher levels of non-EU imports largely came from fuel imports of gas from Norway and Qatar and oil from the US. However, this increase did not come from more imported fuel but higher fuel prices for approximately the same amount of fuel. This price rise led to the UK experiencing an increase of 312% from 2020 to 2021 in imported gas. The UK continues to be dependent on imported gas, with around 50% of gas coming from international markets and 77% of that from Norway. The UK is also highly reliant on gas to heat homes, with 78% of homes heated by gas and a third of the electric grid fuelled by gas. In addition, Russia supplied 24% of the UK’s refined oil imports in 2021, though it has fallen since Russia invaded Ukraine. This all builds into the current energy cost crisis the UK faces. 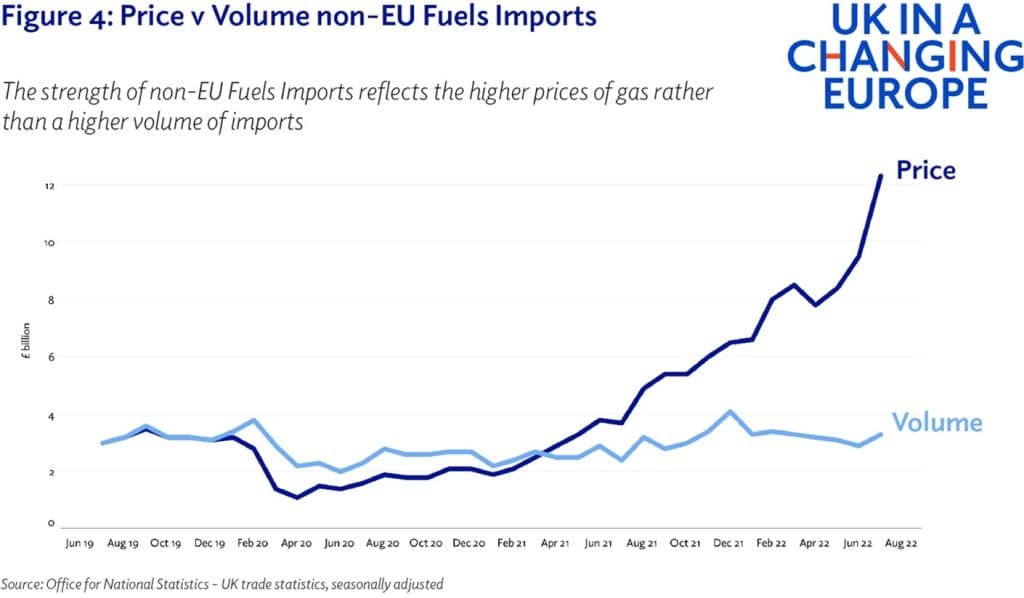 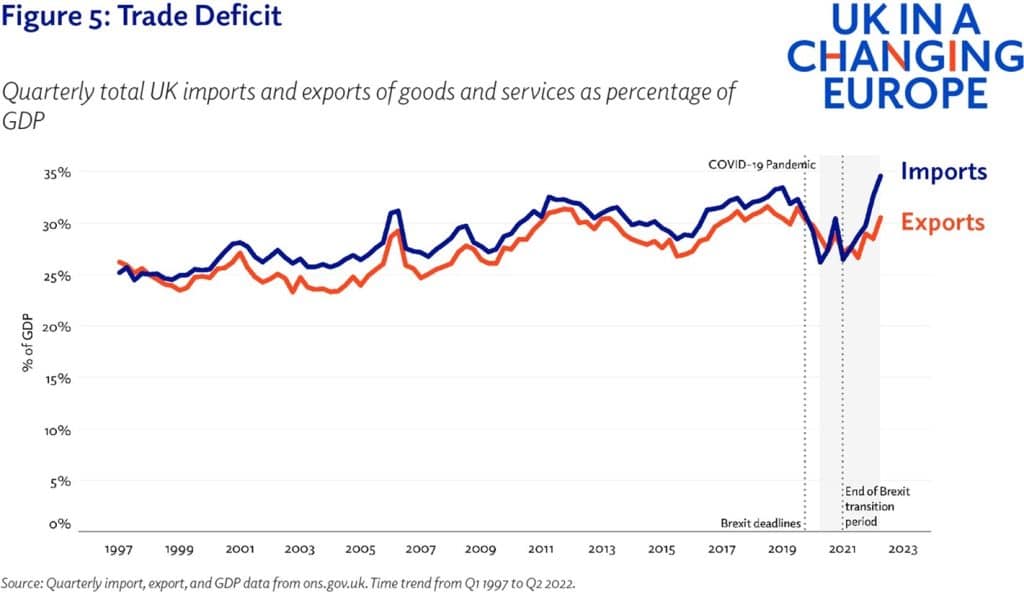 Changes to the method of data collection

Two significant changes to the method of data collection have been introduced since 2021 as a result of Brexit. After Brexit, the UK had to move import and export data collection off the EU system (Intrastat) and also chose to lengthen the departure period of exports. In January 2021, HM Revenue and Customs (HMRC) moved their data collection of EU exports from the Intrastat survey to UK customs declarations. The ONS found that this move led to a discontinuity of export data of around 5% between the two methods.

In January 2022, HMRC implemented a data collection change of import data. It changed the departure period of goods exports from the EU standard of 5 days to 15 days, causing ten days to be lost in January 2022 data, leading to a 6% discontinuity. This issue only occurred for January 2022 data but should be considered when looking at the data from these time periods.