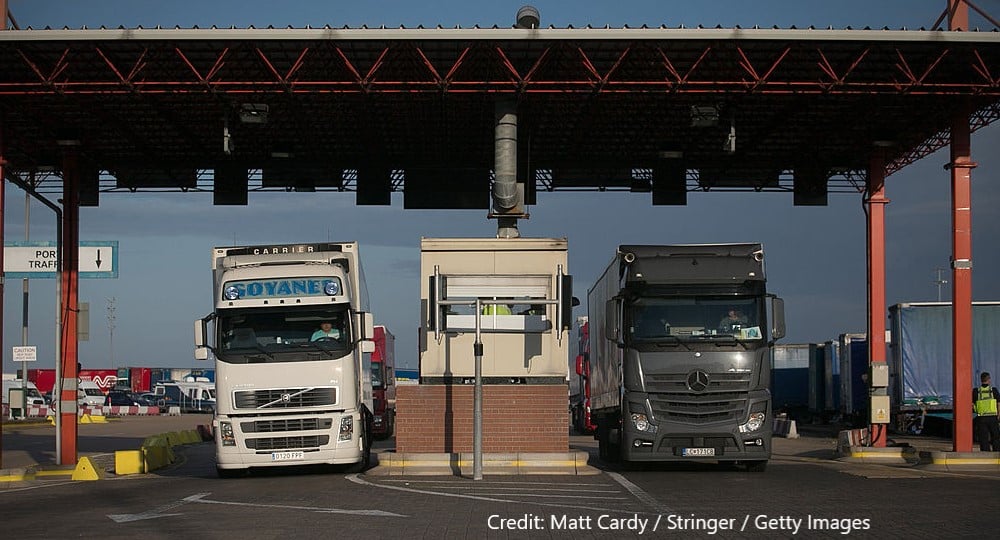 Stephen Hunsaker analyses the latest data from the Office for National Statistics’ September UK trade report, highlighting the key import and export trends. This forms the second in a series of UK in a Changing Europe trade trackers. For the previous update, analysing the data from August, see here.

The Office of National Statistics (ONS) released its monthly trade report for the UK for September 2022 and Q3. Imports and exports of goods and services fell slightly from last month, but overall remained relatively flat. Additional comparisons were added this month to include price versus volume measures to account for dramatically changing prices.

The fall in non-EU imports was due to falling gas prices and not a drop in the volume imported. Looking at Q3 (July-September), while import price measures rose by 1%, the import volume measures fell by 1% of GDP. Total import levels seem to be climbing at a staggering pace this year; however, this is primarily due to inflation and price increases (see figure 1).

Total volume measures for imports show a different story, with imports rising at the end of 2021 before becoming stagnant for most of 2022. Import and export volume measures have still not reached pre-pandemic levels. Total export volumes dipped after the end of the transition period but have crept up, with this quarter only 1% of GDP higher than at the end of the transition period. This is in line with the latest GDP data that shows the UK economy shrinking in the third quarter of 2022 and lagging behind all other G7 countries. 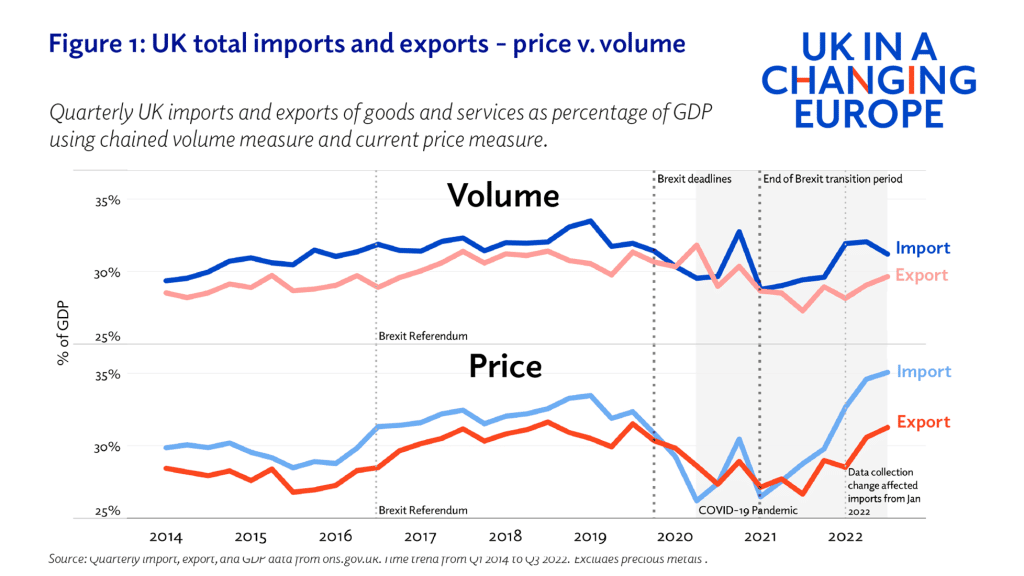 Non-EU price imports continued to rise this quarter, mainly in August. However, as previously mentioned, this can be explained by increasing gas prices. Compared to price measures, volume measured for non-EU imports slightly increased during the pandemic and has only fractionally decreased this year. 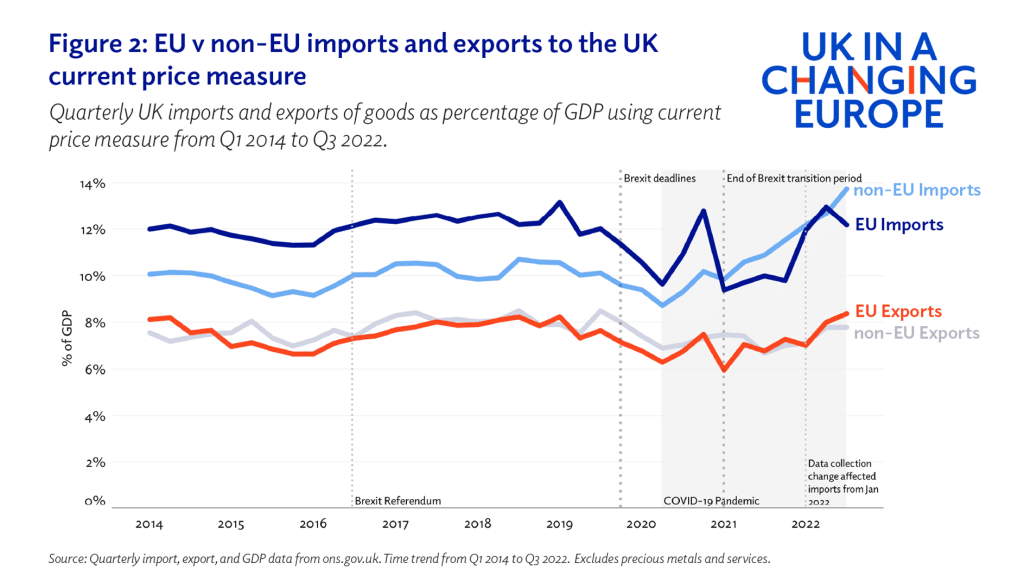 Due to fluctuating price numbers, volume numbers tell a more accurate story of what is occurring in UK trade. The biggest takeaway is that the UK saw a drop in EU imports, but those numbers have started to climb back up while non-EU imports and exports generally have seen slight variation. The story is that the UK has not seen a promised boom in non-EU trade, especially exports but instead stagnation across the board.

These trends have yet to show what some economists predicted, a shift from EU to non-EU trade. Instead, EU and non-EU trade appear to have displayed broadly similar trends. This remains a puzzle, given the new non-tariff barriers to trade with the EU. 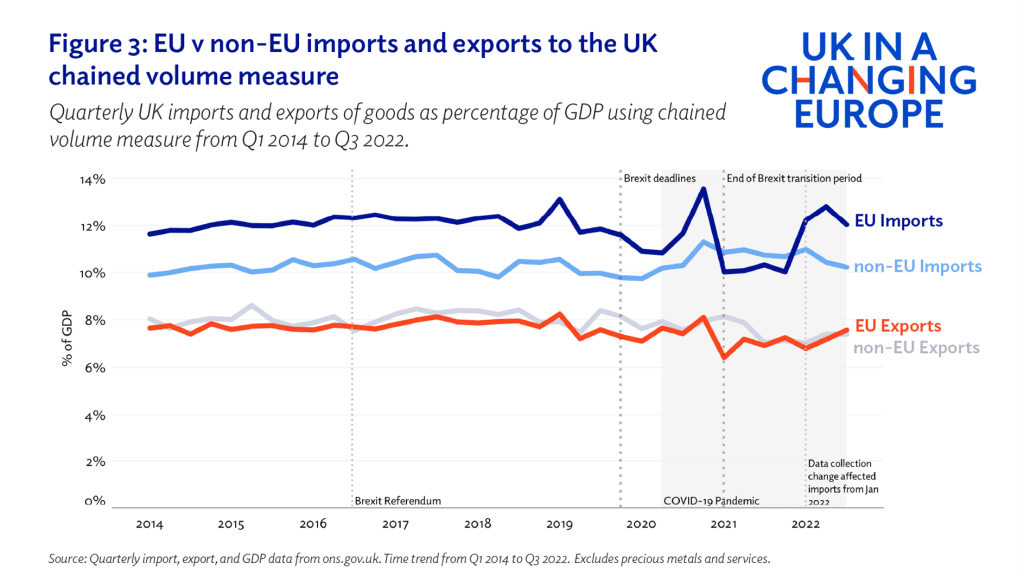 The UK continues to lag behind the rest of the G7; trade performance has been poor relative to other advanced economies since Brexit. Among G7 countries, the UK has performed the worst since the end of the transition period (see Figure 4). Broadly consistent with the data so far, the OBR projected in its March 2022 forecast, using a counterfactual model of the UK, had it not left the EU that imports and exports would be around 15 per cent lower in the long term due to the UK leaving the EU. 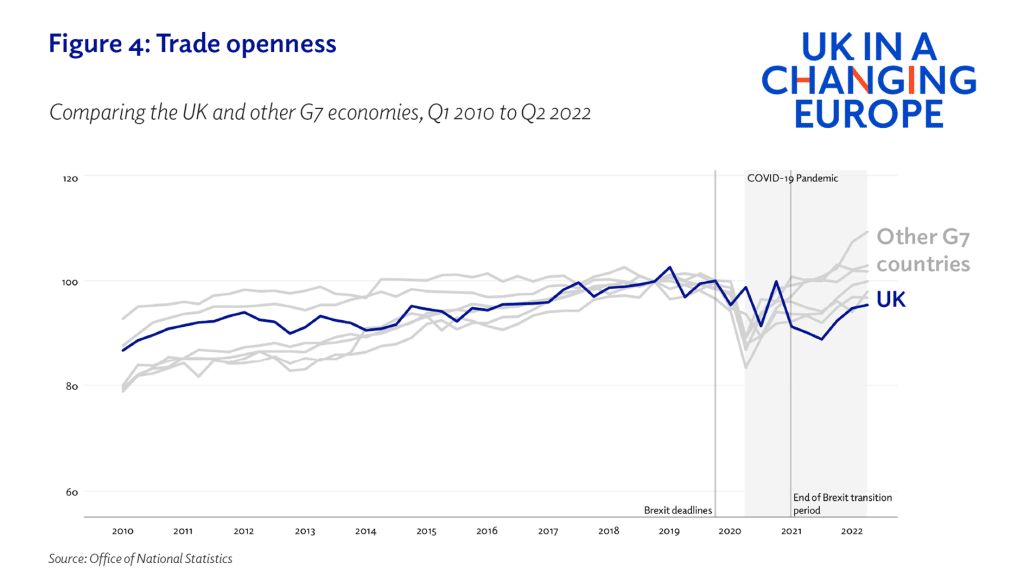 Little news has come out on the trade deal front since Rishi Sunak became PM. The biggest deal on the docket is with India. After missed deadlines, a UK delegation is looking to head to India to continue talks in December, hoping for an agreement by March.

Since Brexit, the UK has signed trade deals with 71 non-EU countries; 69 are rollover deals that the UK had when a part of the EU. They have also signed a deal with the EU, though the fate of the Northern Ireland Protocol continues to jeopardise that deal.

The three new deals signed since Brexit are with Australia, New Zealand, and Japan. The Australia and New Zealand trade deals have yet to take effect but are projected to increase trade by 53% and 60%, respectively. However, even within the Conservative party, there is disagreement about the trade deal’s impact. On 15 November, former Secretary of State for Environment, Food and Rural Affairs George Eustice stated that the Australia trade agreement signed by Liz Truss ‘gave away far too much for far too little’ and was ‘not actually a very good deal’ for the UK. He commented that the UK was trying to sign the deal by the arbitrary deadline of the G7 summit in Cornwall in June 2021, which led to a less than advantageous deal. A similar attempt was made to have the India trade deal signed on Diwali in October 2022, but this deadline was later abandoned. The UK Trade Policy Observatory has cautioned that the Japan deal will provide no net gain from the EU-Japan deal.

See the previous trade tracker for an explanation of ONS changes to the data collection method and its effect on import and export data.