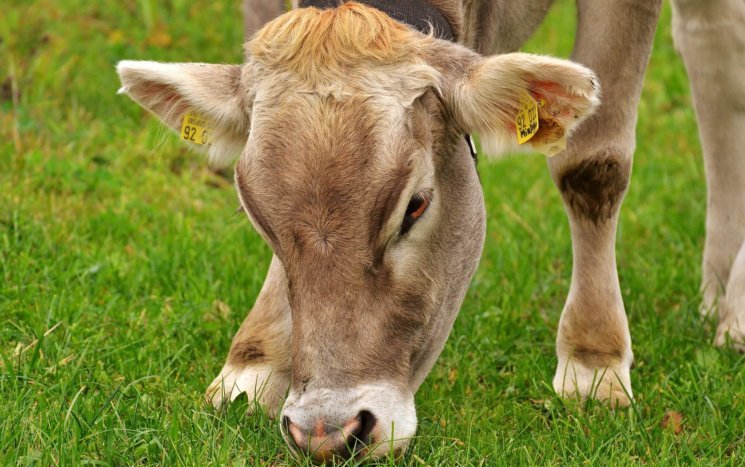 Speaking at the Oxford Farming Conference on 5 January, Secretary of State for Defra (Department for Environment Food and Rural Affairs), Michael Gove outlined the Government’s proposals for a new Agricultural Policy – a plan we might dub a ‘UKAP’. His speech has been widely reported as guaranteeing “farmers the same level of subsidy until 2024”.

James Blitz in the Financial Times noted that: “In 2016, Philip Hammond, the chancellor, said the Treasury would match existing CAP [Common Agricultural Policy] funding to farmers until 2020. The Conservative election manifesto in May extended that deadline to 2022. Mr Gove has this week taken it even further forward to 2024.”

Yet, a careful reading of the published speech fails to reveal this specific commitment. Instead, what the speech actually said was: “We have guaranteed that the amount we allocate to farming support – in cash terms – will be protected…until the end of this Parliament in 2022.

I then envisage guaranteeing that BPS [Basic Payment Scheme] payments continue for a transition period in England, which should last a number of years beyond the implementation period, depending on consultation”. The speech goes on to propose reducing “the largest BPS payments in England…through a straight cap at a maximum level or through a sliding scale of reductions”.

Reference to Defra’s CAP payments page produces the following chart, which shows the distribution of BPS payments in England, through the Rural Payments Agency (RPA), in 2016. For instance, 51% of the total number of recipients (86,746) receives 91% of the total payments (£1.78bn) 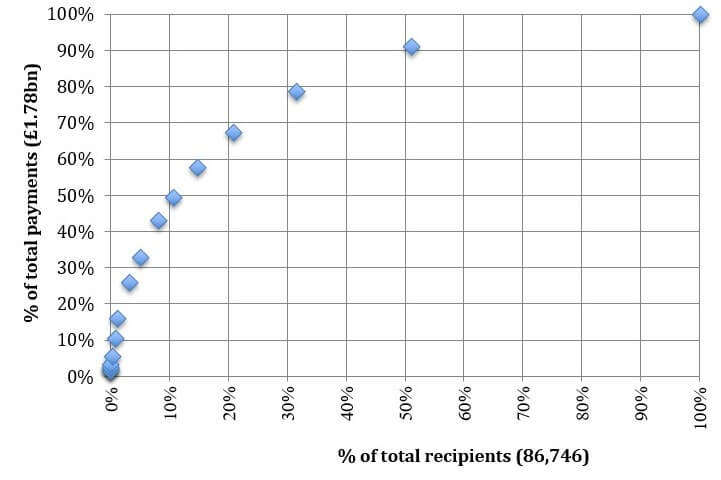 Given this distribution, it is not hard to see how a promise to continue these payments beyond 2022, but with reductions to the “largest payments”, can be made to square with a need to reduce government spending on farm subsidies. It will be interesting to see how the consultations promised in the speech progress.

It will also be interesting to observe the contrasting debates in the devolved regions about these payments, which will also involve some politically creative accounting to work out how the total UK BPS bill – of some £2.5bn – is to be allocated between the provinces.

It is not difficult to imagine spirited debates about how the current borders between England, Scotland, Wales and Northern Ireland might generate quite different rules about public support for farmers.

Otherwise, there has been widespread welcome for the general thrust of Mr Gove’s speech – that the present subsidy system is outdated and needs to be reformed, and that future government support should be directed to paying public money for public goods and conserving natural capital. However, there was little indication of how this might be achieved.

The speech suggests that the approach is to build on previous countryside stewardship and agri-environment schemes. The ambition is clear: less bureaucracy, greater diversity, more and better supported adaptation and innovation to, in Mr Gove’s words “shape change rather than seeking to resist it”.

Britain could certainly aspire to be a world leader if we can design and implement better and all-encompassing schemes to deliver these ambitions, with less form-filling and less bureaucracy.

The critical questions (how much should we pay; for what; and to whom) all still have to be answered. It is not at all clear that the present stewardship and agri-environment schemes provide firm foundations on which to build sensible and sustainable answers to these questions.

Back to food, the principal focus of a UKAP: here, Mr Gove paints a rosy picture of developing “new approaches to food labelling. Not just badging food properly as British, but also creating a new gold-standard metric for food and farming quality…to establish a measure of farm and food quality which would be world-leading”.

It is difficult to imagine how any national gold metric standard might have helped these products achieve their distinction, or how such a standard might foster more of them. He might well have added that, in many cases, legal protection of these distinctive quality products currently depends on the EU.

This continued protection is important, but, as for instance OMSCo’s Kingdom Chedder demonstrates, entrepreneurial and passionate producers have already been able to penetrate international markets without the umbrella of formal trade agreements, albeit while needing to satisfy the importing country’s own standards.

Mr. Gove’s aims are impeccable: “to preserve that which we cherish – a thriving agriculture sector, a healthy rural economy, beautiful landscapes, rich habitats for wildlife, a just society and a fair economy”. Few could possibly disagree. However, we must wait to see the plans and programmes which might have a chance of delivering these outcomes, and to a greater extent than existing policies.

I suspect we will need all of both “the implementation period”, currently the focus of the Brexit negotiations, as well as the “transition period”, apparently promised by the Secretary of State, for the development of a UKAP.