Ukraine: how the war is shaping the Presidential election in France 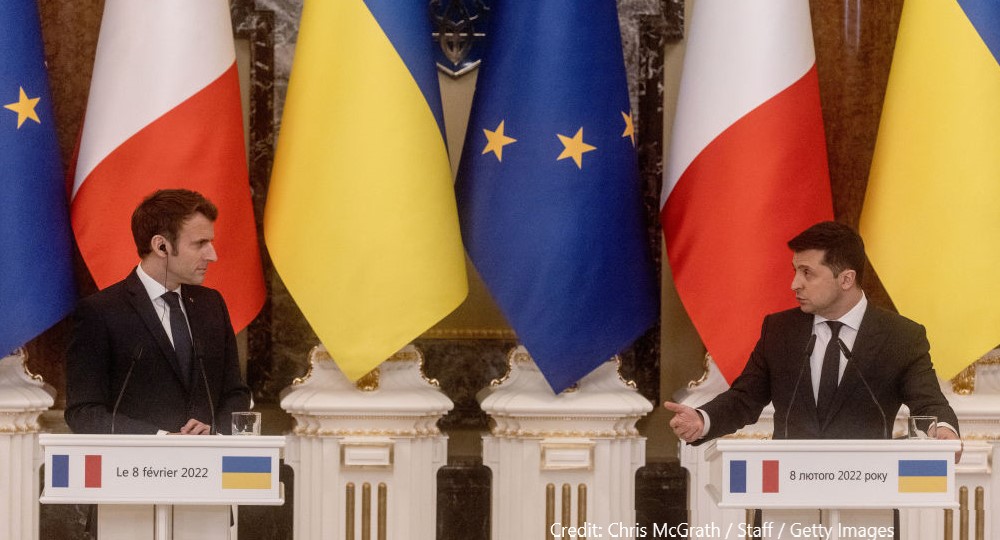 Vladimir Putin’s decision to launch a full-scale invasion of Ukraine could profoundly reshape the security and energy politics of Europe. In the more immediate term, however, the effect of the war in Ukraine on the Presidential election in France is to make an already likely outcome – the re-election of President Macron – a near certainty.

The war in Ukraine dominates the news agenda in France as it does in the UK. Consequently, the actions of the President are receiving much more focus than would normally be the case this close to election day (the first round of voting is on 10 April).

Hardly coincidentally, President Emmanuel Macron has seen his poll lead surge – from 25% to 30% in terms of first round voting intention – despite having only announced his candidacy on 3 March and launched his manifesto on 17 March.

Macron has also been aided by a rally round the flag effect. 90% of French voters are concerned about the war and there is widespread approval for sending arms to Ukraine (65%), economic sanctions against Russia (72%) and accepting Ukrainian refugees (80%).

Moreover, while some in the UK perceive Macron to have been naïve over Russia – given his repeated talks with Putin seem to have yielded little if anything – the general sense in France is that he is the European leader who has made the best effort to address the conflict.

There has been criticism in some quarters – for example of the recent Versailles Summit as a glorified PR operation – but overall Macron has seen a big jump in the number of voters who consider him dynamic, brave and competent.

The big loser has been Valérie Pécresse, candidate of the right-wing Les Républicains. Her voters are especially likely to approve of Macron, which seems to be the cause of her collapse in the polls (down from 14% to 11%). Yet her campaign was in trouble prior to the war – she stopped holding major rallies after a widely ridiculed speech in February, and has struggled to find a clear identity, losing moderate voters to Macron and hardliners to Éric Zemmour.

Zemmour – who is to the right of Marine Le Pen – is the other candidate to suffer since the invasion, slumping four points to 11%. Even if his attempts to whitewash France’s role in the Holocaust didn’t harm his electoral prospects too much, he does now seem to be paying the price for past statements such as ‘I dream of a French Putin’ and ‘Ukraine does not exist’, not to mention a recent string of sexual assault allegations .

However, a history of pro-Russia sentiment is not a guaranteed vote-loser. The far-right Marine Le Pen and far-left Jean-Luc Mélenchon have both seen a slight uptick in support, sitting in second and third place on 18% and 12% respectively. This is despite Le Pen’s campaign being forced to shred 1.2 million leaflets containing an image of her posing with Putin, while Mélenchon just last December called Russia not an enemy but a partner.

On top of that, Le Pen advances the argument that France should withdraw from the integrated command of NATO (as General de Gaulle did in 1966) to avoid entering conflicts which ‘are not ours’. Mélenchon, for his part, calls for full withdrawal from the ‘useless’ NATO in favour of ‘anti-Globalisation alliances’.

So what explains their slight poll bounce? One possibility is that their electorates are more inclined to support an isolationist foreign policy. In France, Mélenchon and Le Pen voters are far more likely than any other group to disapprove of sending arms to Ukraine.

More important, though, is that the war has allowed both to talk about their preferred subject, the cost-of-living crisis. Le Pen has opposed economic sanctions on Russia, stating ‘I don’t want gas prices to rise eightfold and oil prices to double. I don’t want the French to commit hara-kiri’. She has proposed a 75% VAT cut on fuel, while Mélenchon too has opposed an embargo on Russian gas, saying ‘we would be the only ones hit by this’.

‘Spending power’ remains the top concern of French voters and was expected to fall slightly in the first half of 2022. This concern among voters in France has now been exacerbated by the Ukraine conflict, with fuel prices surging and inflation at its highest since 2008. Both Le Pen and Mélenchon enjoy strong support among working class voters likely to be disproportionately hit by such price rises.

Indeed, French support for economic sanctions on Russia is notably lower than the EU average (72% vs. 79%) and Macron’s manifesto launch interestingly majored on promising a review of EU energy pricing rules and the nationalisation of electricity supplier EDF.

The continued salience of spending power increases the chances of Le Pen or Mélenchon (who will be eyeing up the 13% of the vote shared across five other left-wing candidates) being the candidate to make the second-round run-off against Macron.

Macron, of course, is near-certain of victory whomever he faces. But how the campaign unfolds still matters. He will hope to use his second term to drive home ambitious reforms, which also include tax cuts, raising the pension age and reducing unemployment.

Yet, should the campaign meander to its conclusion with Macron playing international statesman as much as prospective candidate, he may find he lacks the political momentum necessary for this agenda.

The immediate challenge is June’s parliamentary elections, where Macron needs his LREM party to obtain a majority – or at least be predominant in any coalition – for him to govern effectively. The party lost its 2017 majority following defections and remains much less popular nationwide than its leader. Therefore, Macron will need to finish the campaign on a high to maximise LREM seats in June.

Otherwise, he may find that he has most freedom for manoeuvre on foreign policy (centred on EU strategic and economic sovereignty), where he does not require the same parliamentary approval.

When it comes to the upcoming election in France, the war in Ukraine is not only smoothing Macron’s path to re-election, managing the European response to it may well become the defining feature of his second term.