One reason for the UK leaving the EU was the promise of ‘taking back control’ of trade policy. The UK would give up its influence and vote on EU policies in return for the freedom to negotiate its own trade agreements with countries around the world.

It is more than four decades since the UK last took the lead in trade negotiations. Back then, exports were mostly domestic manufactured goods where a pound of exports meant a pound of local profits and wages. Today, UK firms operate complex global supply chains where services generate more than half of its domestic profits and wages from trade. Trade policy is no longer just about tariffs and subsidies, but common standards and regulation, investment protection and free movement of ideas and human capital.

First, the UK has to enter into a new governance arrangement with the EU. The now famous Article 50 of the Treaty covers the process of separation from the EU and includes reference to the future economic arrangements. But the precise terms of these arrangements will be part of a separate agreement, that must be unanimously agreed by the remaining 27 member states, and ratified by some national assemblies. The level of complexity involved suggests an interim arrangement may be required.

Second, on leaving the EU the UK must re-negotiate its World Trade Organisation (WTO) membership agreement. There is no precedent for this and the UK will need to agree its terms of engagement outside of the EU with the other 160 member states (to establish ‘Most Favoured Nation’ terms). The most expedient approach may be to transpose most of the existing commitments under its EU membership to avoid a lengthy negotiation.

Third, the UK will no longer be covered by the EU’s 53 Preferential Trade Agreements (PTAs) (mostly with developing states). It may look to strike similar agreements along new or different lines. The UK  would need to consider if, and how, to be included in the Trans-Pacific Partnership which was agreed this year but yet to be ratified. 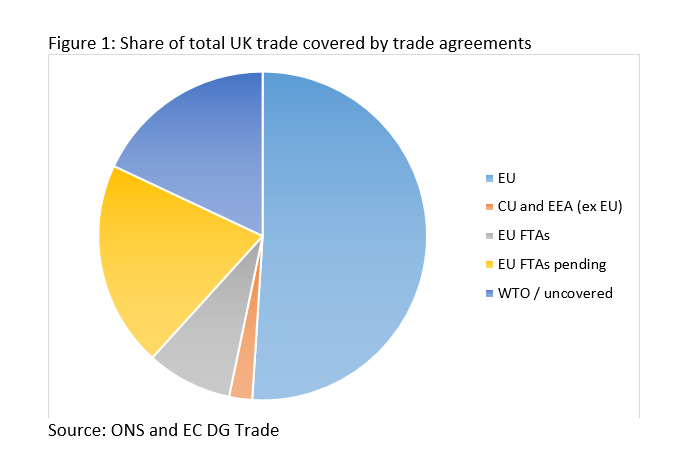 The first priority is with the largest trade partner. One of the most pervasive results in trade studies is that distance matters: surveys suggest that doubling the distance between trading partners results in almost halve the amount of trade.

The UK will have to establish new trade arrangements with the EU as the basis for agreements with other countries. Each option involves a trade-off between access to the single market and control over economic policy leavers.

The first option is for the UK to re-join the European Free Trade Association (EFTA) and become a member of the EEA (e.g. Norway). The UK would have access to the single market but without a vote on the regulations or access to the same courts to settle disputes. Moreover, being a member of the EEA involves accepting the free movement of labour. UK exports would be subject to ‘rules of origin’ taxing trade from outside the EU.

The second option is for the UK to re-join EFTA but without joining the EEA. This would mean less access to the single market. The only ETFA country that is not a member of the EEA is Switzerland which has full Single Market access for goods trade but is required to strike bilateral treaties to secure access for specific services. This is a significant cost. Many services, for example financial services, are carried out through third countries such as the UK.

The UK must also consider the market structure of its most successful industries. It is important to know which sectors generate the most value added for UK firms. OECD statistics shows the UK service sector firms generated 52% of the value added (the latest data is for 2011) in total exports. This animation shows why trading services is fundamentally different to trading goods. The right to establish firms in overseas markets, the same rules and regulations, mutual recognition of providers and free movement of labour are all necessary for being part of a single market for services exports.

Figure 2 gives a break-down of value added by domestic (blue) and foreign (orange) firms in UK exports by the most important trading sectors. It is striking that business services, finance and wholesale and retail trade account for the same domestic value added as the seventeen other sectors from chemicals onwards. For these businesses trade policy is about market access, equivalent regulations and mutual recognition. No FTAs offers anything like the service sector access as the Single Market. 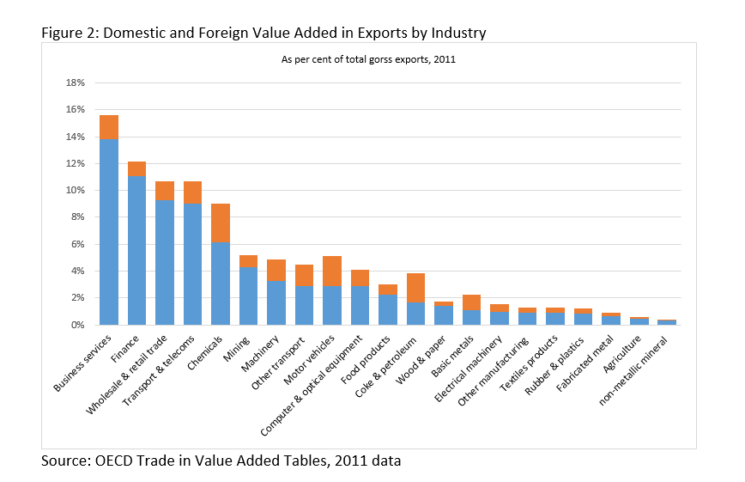 The challenge for the UK’s trade negotiators is to get the best possible package for each of the alternative trade arrangements. But it is ultimately for politicians to decide how the preferences of UK citizens might best map onto these alternative arrangements. From an economics perspective, it is clear that agreements offering deep market access are more preferable than WTO access and many FTAs. But the problem is that policies which enable deep market access encroach on the traditional domain of domestic policy.

One simply cannot separate international trade policy from domestic policy: any attempt to do so will kill the golden goose of trade. The optimal policy solution is to combine future trade arrangements with domestic policy to address the income and regional inequalities that inevitably arise. The Brave New World is finding ways to enjoy the gains from trade while compensating for the social costs.

By Dr Angus Armstrong, senior fellow UK in a Changing Europe and director of macroeconomics at the National Institute of Economics and Social Research.