Under construction: Brexit Britain at the Venice Architecture Biennale 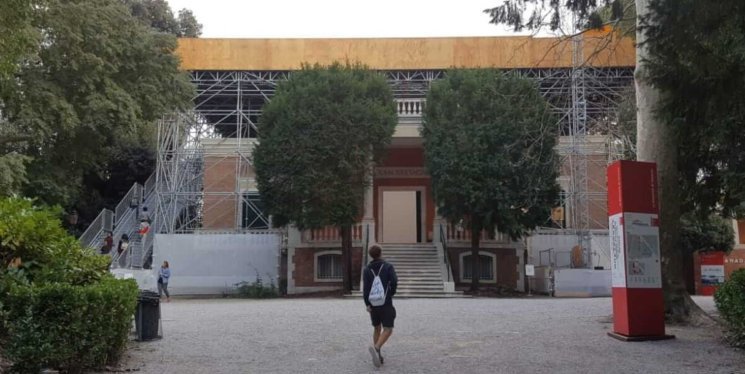 This year’s Venice Architecture Biennale saw 63 nations participate over a six-month period in what has been called the ‘Olympic Games’ of architecture.

As well as showcasing the latest developments in urbanism and design, the institution’s national pavilion format – and funding from foreign ministries – means it is often dictated as much by geopolitics as it is by architecture.

And 2018 was no exception. Germany’s contribution, for example, interrogated international borders, Belgium’s ‘Eurotopie’ layed out a vision for the future of the European Union, and the US pavilion focused on citizenship and statehood in turbulent times.

It should come as no surprise that Britain’s entry responded to the issue that has dominated political, diplomatic and cultural discourse over the past two and a half years: Brexit.

Tasked with representing a nation which remains bitterly divided over the referendum result were Caruso St John Architects, whose winning proposal promised to “engage with current political themes”.

Their controversial offering, titled ‘Island’, saw the interior of the British Pavilion left completely empty, with nothing but a few remnants of the previous year’s display.

The exterior of the building, which was inaugurated at the height of the British Empire and occupies one of the most privileged positions on the premises of the Biennale, was entirely covered in scaffolding, with the construction of a viewing platform at the top of the structure.

Any symbolism was not incidental. According to Caruso St John co-founder Peter St John, Brexit was central to the concept: “There is some kind of reassessment here – some kind of reconstruction. We’re not quite sure what’s happening at the moment.”

Uncertainties about Britain’s place in the world post-Brexit, in particular surrounding its future relationship with the European Union, have been the source of ongoing concern for Britain’s architects.

A report released by the Royal Institute of British Architects (RIBA) found that two-thirds of architects have seen projects delayed due to Brexit and two in five have reported projects cancelled since the EU referendum.

This has been put down to an industry-wide lack of confidence, with investors reluctant to invest in longer term projects until there is some clarity regarding the future of trade between the UK and the EU.

The EU is the UK’s primary market for import and export of construction materials, and a further 74% of architects stated that continued access to the European single market – not currently predicted – was necessary for international expansion.

There was a sunnier outlook when it came to trading further afield. Over half of those surveyed felt that new trade agreements with priority nations, such as the United States, Australia and New Zealand, could boost exports.

This cautious optimism and outward-looking approach was reflected in the curation of the 2018 pavilion. Invitations to host workshops and events in Britain’s empty gallery were extended to all other countries participating in the Biennale throughout the course of the exhibition.

As a further gesture, afternoon visitors were served tea every day at 4pm: a tongue-in-cheek nod to Britain’s long-held reputation as a tea-obsessed nation.

Through these additional details, the curators considered an alternative vision for a post-Brexit Britain: one which is outward looking, generous and in ‘friendship with all nations’.

Many leading Brexiters, including former Foreign Secretary Boris Johnson, have insisted that leaving European Union is an opportunity for Britain to strengthen links with the Commonwealth, becoming ‘more engaged with the world than ever before’.

However, not everyone is convinced by nostalgic gestures and Global Britain rhetoric. One critic at the Biennale remarked that the empty pavilion suggested that the ‘once creative nation’ had ‘run out of ideas’.

RIBA has also voiced fears of a ‘talent exodus’ threatening the £4.8 billion architecture contributes to the UK economy each year.

In March 2018, 60% of EU architects admitted they had considered leaving the UK since the EU referendum.

What’s more, in a no deal scenario, the current reciprocal recognition agreement for architectural qualifications between the UK and the European Economic Area (EEA) would cease to apply.

The government has not currently provided any details around how European architects arriving after the UK’s scheduled exit from the EU would have their qualifications recognised.

Alan Vallance, Chief Executive of RIBA, has called a no deal Brexit ‘disastrous’ for an already ‘deeply unsettled’ profession.

Architecture firms, along with the other UK creative and cultural industries, will therefore be hoping that Theresa May’s government is not ‘out of ideas’ when it comes to getting her Brexit deal approved by parliament.

The Biennale draws to a close this month, over what will be a crucial few weeks for the Brexit process. Afterwards, the scaffolding covering the British pavilion will be taken down, and it will be returned to its previous state.

Whatever happens, the same cannot be said for Britain.