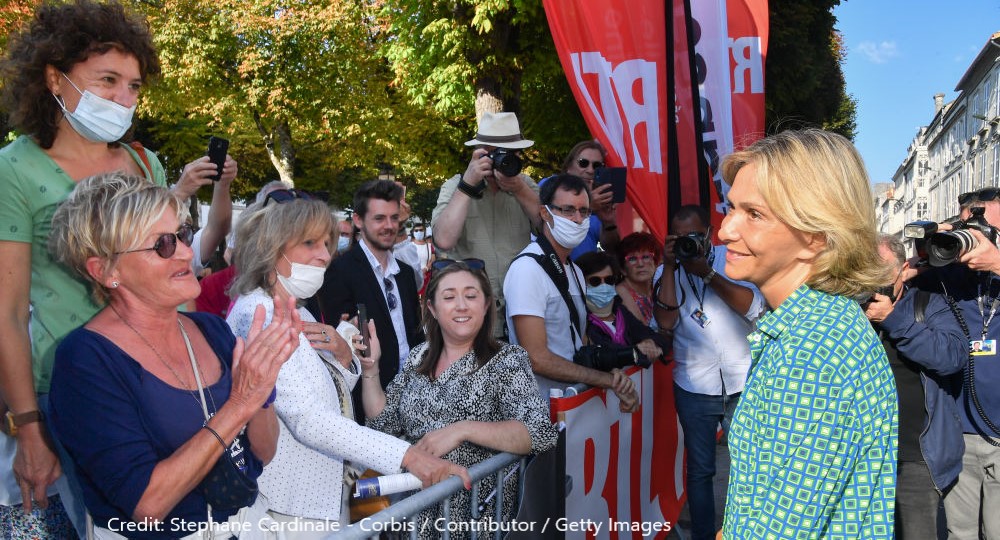 Valérie Pécresse has been sitting in fourth place in the French Presidential polls, with half of Emmanuel Macron’s predicted vote share. Paradoxically, however, she is quite possibly the candidate with the best chance of beating him next April.

Such is the ruthless logic of France’s two-round Presidential electoral system.

Pécresse was recently elected the official candidate of Les Républicains (LR), the established party of the French right. LR can trace its lineage back through former Presidents Sarkozy, Chirac, Pompidou and de Gaulle.

This is a party used to governing, and, in principle at least, there remains a large constituency which might back a Gaullist candidate combining a respect for tradition with economic prudence and a clear sense of leadership. However, LR have struggled in the last two elections with candidates mired in corruption scandals.

In the meantime, Emmanuel Macron has emerged through the centre with a moderate economic platform and vision of social reform, endearing him to many centre-right voters. The far right has simultaneously eaten into LR’s vote from the other side, with Marine Le Pen still polling at just under 20%, and the insurgent TV personality and espouser of racist conspiracy theories Eric Zemmour at around 14%.

This partly explains why Pécresse has sat at 10-12% in the polls. But the political reality is that she only needs to garner around 20% to finish second and make the head-to-head run-off.

And there are several reasons she might fancy her chances. First, she can expect a bounce from becoming the official candidate of LR. Xavier Bertrand and Éric Ciotti, LR candidates who commanded strong bases, have now endorsed Pécresse, and we can expect many of their supporters to turn to her. Early indications suggest she is already neck-and-neck with Le Pen on 17%.

Her next objective will be taking votes from the two far-right candidates. Zemmour is the more obvious target, his political narrative mourns a glorious but lost France of the past and is alluring to the arch-traditionalist and most socially conservative strand of LR voters.

Yet his surge in the polls has stalled in recent weeks. It remains to be seen whether a focus on immigration and identity can sustain him through an entire campaign, especially given the lack of a wider party machine (his buzz so far has been made on television platforms) and loss of his key financial backer.

Pécresse is well placed to profit from this. She is an established member of LR who served under Chirac and Sarkozy. Her ban on burkinis in public leisure areas in the Île-de-France region and stated preference for civil unions over same-sex marriages underline her conservative social values which appeal to the very voters she is hoping to win over. Moreover, her call to break up ‘urban ghettos’ to combat Islamism and advocacy of harsher penalties for offences committed in high-crime areas may also find cut-through with Le Pen’s more urban and populist voter base.

Added to which, her orthodox right-wing economic outlook will speak to the traditional right. Her promises to increase the pension age to 65, end the 35 hour working week, cut 200,000 civil service jobs and slash Covid-induced public debts will all appeal to that demographic.

President Macron’s economic agenda won over many more moderate centre-right voters, yet Pécresse has accused him of burning the accounts through his Covid spending, promising tighter fiscal policies alongside a trademark tendency to explain how she will account financially for pledges she makes.

Whether that is enough to win back many centre-right votes remains to be seen – Macron’s handling of the pandemic has been broadly appreciated by the French public, and his ratings are strong for an incumbent President. Yet for any centre-right voters who opted for Macron because they had nowhere else to go, Pécresse is certainly a plausible alternative.

Given the multiple bases she can appeal to, Pécresse has a decent chance of making 20%, especially if Zemmour remains strong enough to divide the Le Pen vote. And there is good reason to think she is the candidate Macron would least like to face in a run-off.

Against Le Pen, Macron would present himself as a sensible and experienced leader. But that distinction falls away against Pécresse’s economic platform and previous experience as Budget Minister and governor of France’s most populous region.

Macron’s 2017 campaign also projected a sense of energy and ambition: yet Pécresse will hope to flip this momentum around. She is already condemning Macron for a failure to deliver on his promises, contrasting his desire to plaire (please, or perform) against her own tendency to faire (do, or deliver). And she may use her gender to enhance a sense of freshness: France has never had a female President and she has already described herself as one third Thatcher, two thirds Merkel.

All this will leave Macron worried, but her final trump card could – remarkably – be an appeal to left-wing voters. The French left is bitterly divided and has no hope of making the second round. 80% of left-wing voters say they would support Macron in a run-off against Le Pen, but this drops to 63% should his opponent be Pécresse.

Macron’s previous role as Economy Minister in the last Socialist government has left a sense of betrayal, and many voters on the left would relish the chance to give him a bloody nose in the run-off, either by abstaining or voting for his opponent.

Should he face Le Pen, most on the left would reluctantly vote Macron. But Pécresse is less toxic, and many left-wing voters see her and Macron as quasi-identical on economic issues (his Economy Minister, Bruno Le Maire, has after all previously served in the same government as Pécresse).

A run-off against Pécresse would mean Macron could no longer rely on a ‘republican front’ of anti-far right voters to get him over the line, and a victory which for a long time seemed a foregone conclusion would become much less certain.