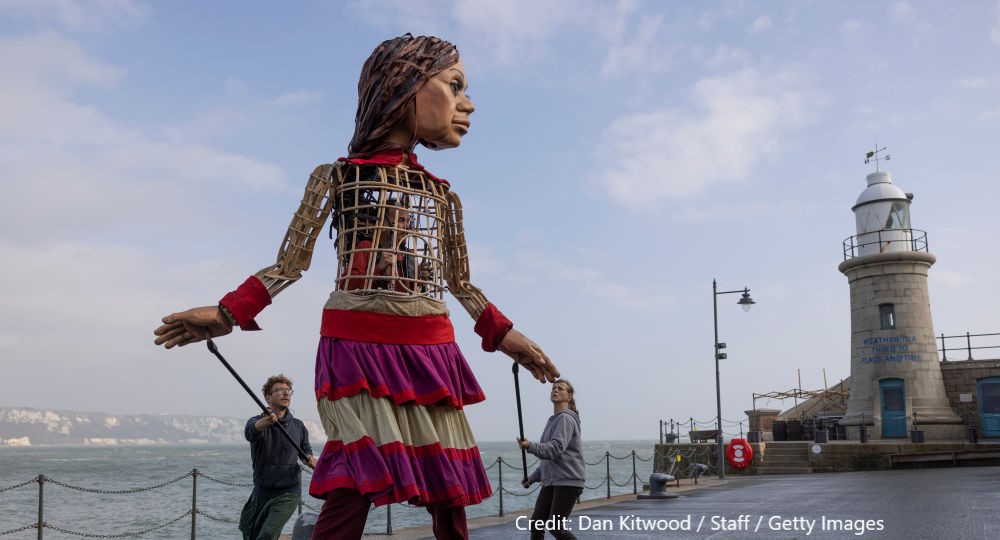 Throughout 2020, the convergence of Brexit, the rise of Covid-19 and the ‘migrant crisis’ put Kent in the headlines like never before: images of refugees on Kent beaches, lorries queued on the county’s motorways and the white cliffs of Dover crumbling into the sea were all used to support ideas that severing ties with the EU was the best – or worst – thing the UK has ever done.

Christmas 2020 was effectively cancelled for many as the ‘Kent variant’ spread rapidly through the south-east of England, and the French closure of the border left thousands of foreign lorry drivers stranded on the hard shoulder of the M20 over the festive period.

For many onlookers, the spectacle of the channel ports being blocked seemed to symbolise the final and irreversible breakdown of the dream of seamless European mobility, barely 25 years after the opening of the Channel Tunnel.

A year on, the Kentish variant has been overshadowed by Omicron, but Kent remains in the headlines. At least 25,000 migrants are thought to have arrived by boat on the county’s shores in 2021, three times the number in 2020. Most have landed via the shortest crossing routes, aiming for the beaches to the north of Dover at Kingsdown and St Margaret’s Bay, though others have headed for the beacon of Dungeness lighthouse to the south-east tip of the county.

Tragically, 2021 has seen one of the worst disasters in the Channel, with at least 27 drowning when their dingy capsized: some UK press reports suggested that they had phoned French police for help but as they were in UK waters the French said they could not help, despite the fact they were only seven miles from Calais.

The figuration of Kent as the ‘frontline’ in the migrant crisis has witnessed different factions descending to its coast. ‘Proud patriots’ have patrolled the beaches, and pushed refugee boats back, harassing RNLI boats offering aid. On the other hand, supporters have offered the hand of welcome: Kent Refugee Action Network have organised welcome parties for those corralled into the brutal, inhospitable Napier Barracks in Folkestone, and held vigils in the wake of the Channel deaths.

Since Brexit, it seems one cannot be ambivalent about migration: the ‘hostile environment’ rhetoric seems to have divided the nation, with Priti Patel’s declared aim of forcing migrant boats back wildly popular in some quarters, but condemned as inhuman by others.

The fact that increasing numbers of refugees have managed to evade cross-channel patrols, and have been pictured standing on Kent beaches, has certainly allowed some sections of the media to discourse a de facto ‘invasion’ (one article in The Sun carried a photo that it claimed captured ‘The Moment Migrants Storm Kent Beaches’, invoking militaristic metaphors of national defence having been breached). For many Leave voters, such images of refugee crossings seemingly galvanised their desire to leave the EU.

The identity of Kent has long been shaped by the real and imagined relationship between Britain and continental Europe, a relationship that has oscillated between entente cordiale and economic cooperation to outright antagonism.

Kent’s changing relationship with continental Europe is manifested in the landscape in obvious ways, particularly at the coast: this is a militarised landscape of castles, Napoleonic-era sea forts, World War Two tank traps, hidden bunkers, abandoned airfields, Martello Towers, repurposed barracks, radar stations, the remnants of gun emplacements and border lookouts. Most famous of all, perhaps, is Dover Castle – the ‘key to England’ – standing on the famous cliffs (‘the white walls of Albion’). It is this landscape that has had particularly powerful national resonance in recent debates about identity and belonging, often deployed in discourses emphasising the idea of Britain as an island nation.

But in other, perhaps happier, times, Kent benefitted massively from its maritime trade and commercial connections with Europe. As well as its ferry terminals at Dover and Ramsgate, and the now-defunct, weed-enveloped hoverport at Pegwell Bay, the Kent coast is pockmarked by the infrastructures that made the Transmanche region a reality during the period of EU membership.

Most notably, Le Shuttle disgorges its payload at the vast 350-acre Channel Tunnel terminal at Cheriton, with the Eurostar passenger train stopping, intermittently, at the International Terminals at Ashford and Ebbsfleet en route to the London terminus at St Pancras.

But there are many other connections that bind Kent to continental Europe. There are no less than three high voltage direct electricity current connections, constructed in 1961, 1986 and 2020 respectively, with associated converter stations at Lydd, Sellindge and Cheriton. The landfall facilities associated with multiple subsea communication cables – Rembrandt 2, Hermes South and Rioja 2 – can also be found along the Kentish coast, with American firm Equinix currently constructing an optical submarine cable running 200 miles between London and Paris, heralded as the ‘data equivalent of the Channel Tunnel’.

The refugee landings, lorries queueing on motorways, and the battle between Britain and Europe over Covid-19 vaccines – stories which have taken tangible and sometimes iconic form at the Kent coast – have all then been presented by Brexiteers in Westminster as de facto evidence that the decision to leave Europe had been the right one.

But as 2021 unfolded, the 59% in Kent who voted Leave might be wondering whether their vote was a sensible one: the numbers of refugees landings has continued to rise, new border facilities and sprawling lorry parks have been constructed to cope with post-Brexit border bureaucracy, English fishermen have failed to see the promised benefits of post-Brexit control of fishing grounds, and the Kentish shellfish industry has also suffered given Kentish waters have been ruled by the EU as too dirty for live shellfish export.

And perhaps 2021 has put the biggest threat of all to the Kentish coast – that of sea level change – into the spotlight like never before, reminding us that the major existential threat to Britain is not that of uncontrolled migration, but the climate change that will scorch our fields and flood our towns.

Turning away from our continental neighbours at a time of immanent and seemingly inescapable global change that requires cooperation, not isolationism, is perhaps the ultimate folly of Brexit, one that the Leave voters living in the low-lying parts of the Kent coast might come to regret in years to come.

By Phil Hubbard, Professor of Urban Studies at King’s College London. His book Borderland: identity and belonging at the edge of England will be published by Manchester University Press in June 2022.