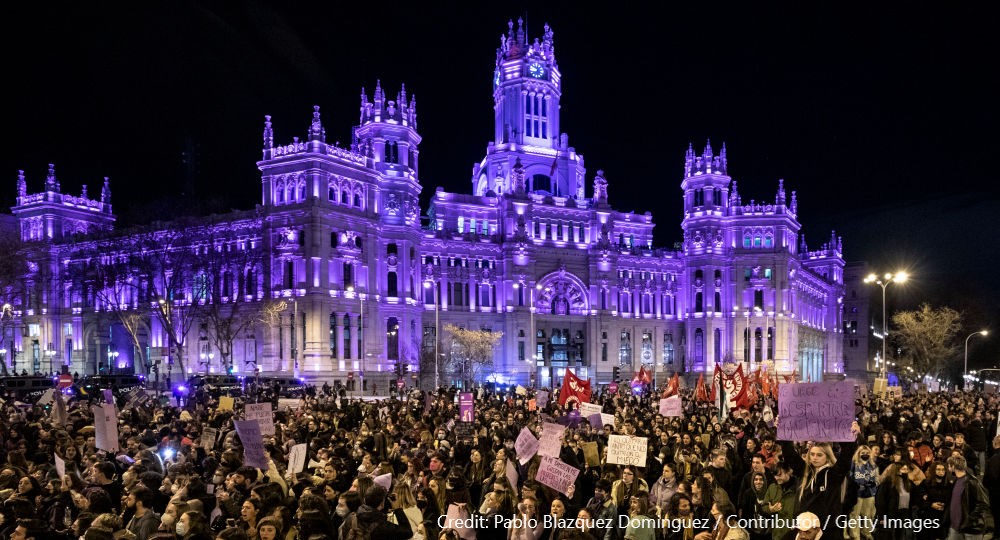 The European Commission marked International Women’s Day 2022 with a first: a proposal for EU legislation to tackle violence against women.

The draft proposal would allow President von der Leyen to inch closer towards achieving her goal of ending gender-based violence in the EU, as set out in last year’s Gender Equality Strategy.

However, the proposals will likely be met with resistance from certain member states as issues of gender and gender equality become increasingly disputed.

The draft makes good on von der Leyen’s commitment to put forward plans to combat increasing rates of domestic violence, sexual assault and online harassment across the continent. One in three women in the EU have experienced some kind of physical or psychological violence.

The proposal presents an opportunity for the EU to make progress on the issue of gender equality, after the ratification process for the Istanbul Convention ground to a halt. The Convention, an international treaty which aims to prevent domestic violence and violence against women, has been signed by a majority of EU member states.

However, a handful of countries – Bulgaria, the Czech Republic, Hungary, Lithuania, Latvia and Slovakia – have thus far refused to ratify, with Poland even announcing plans to withdraw from the convention. This discord has prevented the common application of law on domestic violence across the EU.

The stalemate led to suggestions that the Istanbul Convention could by bypassed, with some MEPs demanding that violence against women (VAW) be added to Article 83 of the Treaty on the Functioning of the EU, thus declaring VAW as a crime to be combatted on a common basis in the same way as people trafficking or terrorism. However, Treaty amendment is difficult.

The Commission’s proposal, on the other hand, requires only a qualified majority to introduce a legally binding text.

Those member states that have ratified the Convention have recognised the issue of violence against women in domestic law. However, national approaches to tackling the issue have varied. This has led to legal inconsistencies across the EU, and women in some EU countries being left more vulnerable to abuse or harassment than, or without the same recourse to justice as, their peers in other member states.

Nine EU countries have no specific definition of domestic violence in law, whereas others have distinct definitions of sexual, psychological, or physical violence and differing penalties and protection for victims. A large number of signatories also have laws outlawing domestic violence, but no specific acknowledgement of VAW and thus no means of tackling gender-based violence or of protecting women (via, for instance, the provision of women-only shelters).

Furthermore, while all EU member states, signatories or not, have legislation outlawing sexual assault, some have no criminal penalty for marital rape, and others consider assault to have occurred only with coercion, force or threats – a lack of consent alone is insufficient.

The Commission’s proposal would address these inconsistencies by introducing common minimum penalties, and common definitions of domestic violence, assault and violence against women.

There is a catch, however. Although von der Leyen’s proposal might escape veto in the Council, member states would still have to transpose the measures into domestic law. The sight of governments in Poland and Hungary cracking down on women’s rights and access to healthcare, ‘gender ideology’ and LGBTQ rights does not suggest that this will be straightforward.

So where does the opposition come from? Firstly, some member states have concerns that measures similar to the Istanbul Convention will focus too heavily on gender. A critique from some member states, including the Hungarian, Polish and Lithuanian premiers, is that such legislation promotes ‘gender ideology’.

These governments have presented gender theory – or any movement away from the understanding that sex is one with gender – as a significant threat to their national cultural norms, and as undermining traditional Christian ‘family values’.

Secondly, some member state governments will likely see the Commission’s proposal as overstepping its mandate. Viktor Orbán, the Hungarian prime minister, has already described the definition of gender and promotion of gender ideology as an exclusive competence of a member state, and has argued that rejecting the Istanbul Convention was a way of defending Hungarian sovereignty against the EU.

Poland, meanwhile, has said that any proposal on gender equality would be undermining the definition of equality between men and women found in the Treaty on the Functioning of the EU, and would thus arguably see the Commission as pushing treaty change without the consent of a member state.

EU member states may share the same economic interests, but at a time when ‘cultural issues’ are particularly divisive in Europe politics, it is becoming increasingly clear that they may not share the same values. This will be a stumbling block to any proposals from the Commission, particularly as politicians such as Orbán in Hungary and Morawiecki in Poland push the narrative that the EU is encroaching on their traditional national values.

The Commission proposal may be historic, but there is a long road ahead to ensure that this ambitious initiative does not go the way of the Istanbul Convention. International Women’s Day 2023 could see the EU on its way to having a cohesive, explicit legal strategy on tackling gender-based violence- or simply more of the same.