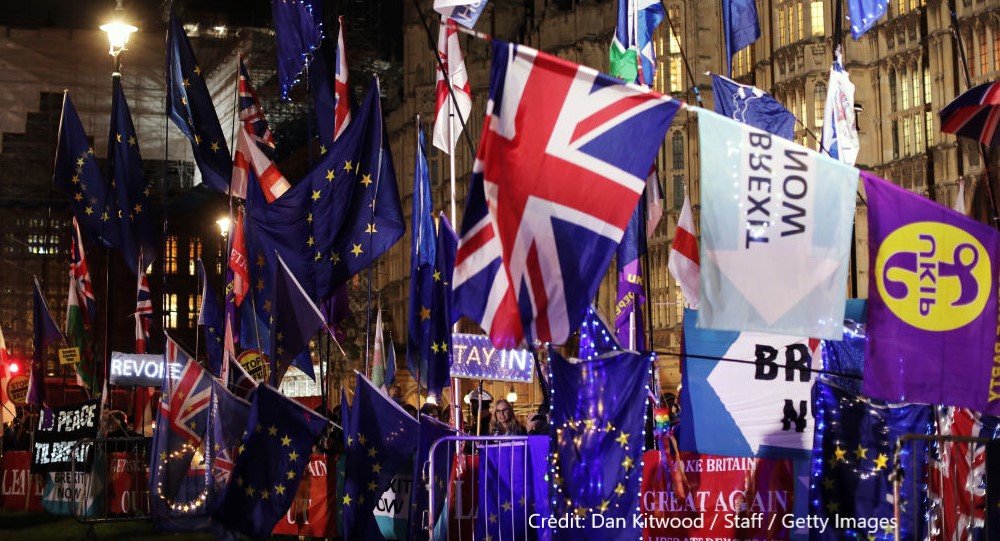 Voters in Britain continue to be divided over the merits and consequences of Brexit according to a new poll by Redfield & Wilton Strategies for UK in a Changing Europe released today. It suggests that in a referendum on whether Britain should join or stay out of the EU, 47% would vote to join and 53% to stay out.

Those who voted Leave in the 2016 referendum would back staying out rather than joining by 89% to 11%. Most of those who voted Remain (79%) would vote to rejoin, but there is a notable minority (21%) who now say that Britain should stay out.

Some Remain voters do therefore seem to have accepted that Brexit has now been done – albeit this is far from a widespread view. Meanwhile, 69% of those who did not vote in 2016 (many of whom were too young to do so) would vote to join, while only 31% want to stay out.

Not that Remain voters believe that the UK will attempt to rejoin the EU any time soon. Only one in four (25%) believe such a prospect is likely, while nearly twice as many (47%) reckon it is unlikely. They are also far from sure that the EU would accept any application. Only one in three (33%) believe it is likely that they would, while 37% reckon it is unlikely. Most Remain voters may not like being outside the EU, but they apparently see little prospect of the Brexit decision being reversed.

Nevertheless, Remain voters (67%) are still markedly more likely than their Leave counterparts (34%) to say that the UK should have a close relationship with the EU. Asked to say whether the UK should generally align itself with the EU or the USA on an issue – or stake out an independent position – as many as 54% of Remain voters said it should usually align with the EU, compared with just 16% of Leave voters.

Similarly, when for 18 different public policy areas and industrial sectors, respondents were asked whether it was more important for the UK to have a close relationship with the UK, the EU, or another country, on average 57% of Remain voters nominated the EU, but only 25% of Leave supporters.

Perhaps unsurprisingly, Remain voters are also far more critical than Leave supporters of how the UK government has handled Brexit. Around three in five (61%) disapprove of the government’s handling, while just one in six (17%) approve. In contrast half (50%) of Leave voters approve and only around one in five (21%) disapprove.

But when it comes to attitudes to immigration, an issue that was central in the EU referendum debate, there is a paradox in the attitudes of Remain and Leave voters.

Despite the implementation of Brexit, which resulted in the termination of freedom of movement for EU citizens, Leave voters are still much more likely than Remain supporters to say that (i) immigration from the EU has increased since the UK left the EU (48% of Leave voters hold this view but only 29% of Remain supporters), (ii) that current level of immigration is too high (56% and 22%), and (iii) that immigration from the EU will increase over the next five years (40% and 28%).

These figures might be thought to suggest that Remain voters are more likely to think that Brexit has and will deliver the lower migration for which many Leave supporters seemed to be hoping five years ago (and perhaps Remain voters themselves were fearing).

However rather than this being indicative of disappointment among Leave voters with the impact of Brexit on immigration, perhaps the pattern of answers simply reflects a preference among many Leave voters for a low level of immigration, a preference (not shared by most Remain voters) that means they are always more inclined to say that immigration is too high and to fear that it will go up.

Yet if Britain is still for the most part divided over many of the issues in the Brexit debate, there are a few instances where Remain and Leave voters are largely at one. Indeed, this seems particularly true of two issues that have given rise to controversy over the last year – the coronavirus vaccine rollout and the position of Northern Ireland.

The UK, which procured its own supplies, was initially at least quicker off the mark in implementing a programme of vaccination against COVID-19. Brexiteers were keen at the time to argue that this demonstrated why the UK was better off outside the EU. Meanwhile, the EU came in for heavy criticism when briefly it was suggested it might try to stop the export of vaccines to Northern Ireland and subsequently raised questions about supply to the UK as a whole.

This incident seems to have hit home with voters. Even among Remain supporters, nearly half (49%) say that Brexit has had a positive impact on the vaccine rollout, a view shared by no less than seven in ten (70%) Leave voters.

At the same time, however dissatisfied Remain voters might be with the UK government’s handling of Brexit, they are not significantly more likely than Leave voters to say that the EU has handled the issue well; just 21% of Remain voters say they have handled Brexit well, as do only 19% of Leave supporters.

The second issue that has been prominent in recent months is the operation of the Northern Ireland protocol, which is designed to allow the territory to be part of both the UK and EU single markets. While the protocol obviates the need for customs and regulatory checks at the border between the North and the Republic, it does require some checks be made on goods imported into the North from Great Britain. The UK government has been arguing that these checks are too onerous and infringe the UK’s sovereignty.

Despite the continuing division between Remain and Leave voters, it seems that to date at least, the UK government has been winning the battle for domestic public opinion when Brussels and London have been at loggerheads.

By Sir John Curtice, senior fellow at UK in a Changing Europe, Professor of Politics at the University of Strathclyde and senior fellow, NatCen Social Research.