Voters understand what a no-deal Brexit means, but are split on what impact it’d have

The probability of a no deal Brexit, it is fair to say, is on the rise. But what does no deal mean? According to a Sky News Twitter poll, which did the rounds on Twitter last week, over a quarter of voters think no deal means no Brexit at all.

It is easy to see how this could be an attractive idea for some people. The idea of a public too disengaged and uninterested to yet realise what no deal Brexit means, but who will recoil in horror when they do, marries both the hope of People’s Vote strategists that the polls will soon shift and the belief of campaigners that, once given the facts, voters will change their mind on Brexit altogether.

With YouGov, we have polled voters on the implications of no deal twice – back in August, and for a second time this month – and found a different story to the one. Just 4 per cent of voters think that a no deal Brexit would mean the ‘UK remains an EU member’ – the exact same number who thought so back in August.

There was no statistically significant difference between whether you voted Leave or Remain in 2016, or where you live in the country, or which social grade you are from. 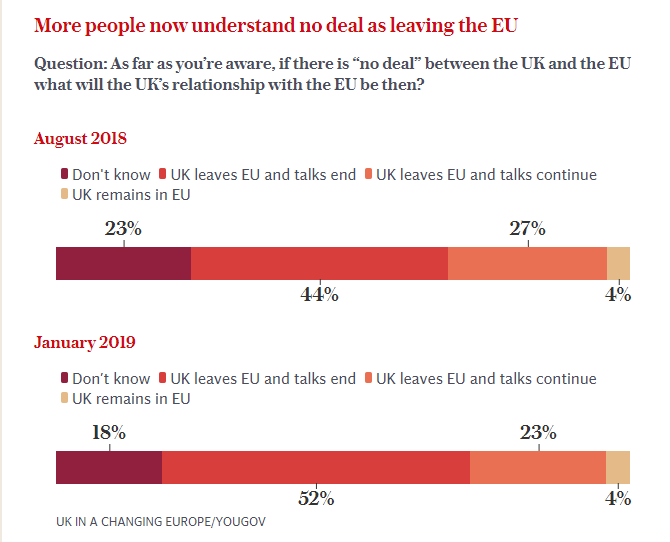 Anthony Wells of YouGov has corroborated this evidence with an even lower figure of 1 per cent who think no deal equals Remain. The British public have got the picture, and they haven’t been living under a rock for the past two-and-a-bit years: they know that no deal Brexit would mean we would leave the EU.

Indeed, when we polled people on no deal this time, the public increasingly understood no deal in the same way that the experts on Brexit do: it would mean the end of meaningful negotiations, with the abandonment of the withdrawal agreement leading to more acrimonious future relations between the UK and the EU.

While 44 per cent thought that a no deal would mean no further Brexit negotiations and the end of talks when we asked them back in August, 52 per cent say this today.

Despite an increasing number of Brexiters using the loaded political language of a ‘managed no deal’, the number of those we asked who would expect negotiations to continue actually dropped from the summer, from 27 per cent to 23 per cent.

On what the overall impact of no deal would be, there was almost as much unanimity. Only 6 per cent thought that no deal would mean a status quo, where nothing would really change and there would be no disruption. Here, there was a split: 2% of Remain voters anticipated disruption, and 11% of Leave voters.

Among the vast majority who anticipated at least some negative effects from no deal, the public were wholly split along Leave and Remain lines as to whether this disruption would be a short-term effect or long-term and lasting damage. 40% of voters – but 73 per cent of Remainers and just 12 per cent of Leavers – anticipated no deal would mean substantial and lasting disruption.

63 per cent of Leavers instead agreed there would be ‘short term disruption but no lasting effects’, set against 16 per cent of Remainers.

All of this is important, as it points to a deeper problem for Remain campaigners: voters, and particularly Leave voters, have some understanding of what no deal would mean.

While people understand there will be at least some disruption, it is hard to grasp and get your head around the real-world effects on the UK’s legal system and the terms on which we trade and travel with the EU. As a result, they aren’t wholly convinced of the implications for what it would mean for them.

Voters, even some three-quarters of Leave voters, largely accept there will be, at the very least, some short-term disruption. They aren’t yet fully convinced, however, that the range of factors that have been highlighted as potential pinch points for public policy will, in the end be affected if we drop out without a deal on 29 March.

Our previous polling back in August showed that voters consistently split along a referendum divide when asked what specific impacts they expected from no deal. Remain voters saw every form of disruption – from a decline in sterling, through to border posts on the island of Ireland –  as more likely to occur than Leave voters, and by large margins.

This difference has persisted, and in many cases has got larger. There are only two areas where there has been a significant increase in the last four months in overall levels of public concern: on the possibility of the army being called in (anticipated by 33 per cent of the public, up from 18 per cent back in the summer) and a substantial decline in house prices (expected by 29 per cent, up from 21 per cent).

In both cases, most of the rise is accounted for by growing concern among Remain voters.

This points to an interesting paradox: Leave voters are largely sceptical of politicians, yet continue to think that ultimately the British state will pull it out of the bag, and it’ll be alright on the night. They could be in for a surprise.