Wargame: A Despatch from the Front 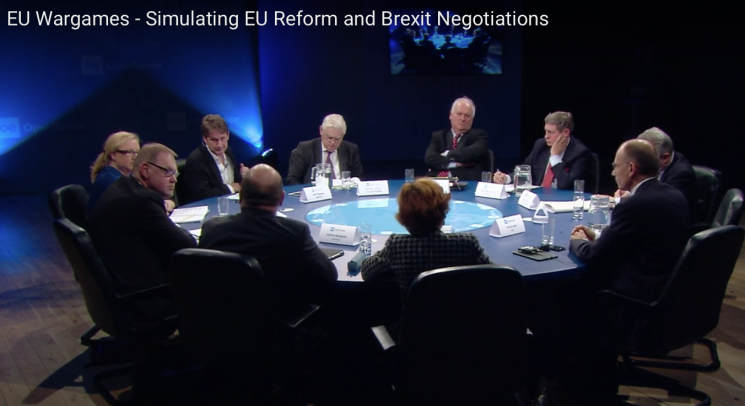 Perhaps it wasn’t intentional, but the venue for this week’s Open Europe’s ‘EU wargame’ was a brewery. And there wasn’t any alcohol to be found. Draw your own conclusions.

The Wargame was divided into two parts: First, renegotiating the terms of the EU’s membership; then, assuming a ‘no’ vote on the new terms of membership, negotiations on the UK’s post-Brexit relationship with the UK’s former member state partners. By bringing together various distinguished former politicians and ambassadors, the organisers hoped to get more of the inside track.

To what extent could such an event hope to simulate the likely course of negotiations between the UK and its EU partners? Setting the stage with 28 member states would have been a formidable undertaking. Open Europe opted for eight member states intended to represent a broad cross section – although one which was rather more heavily weighted towards larger member states and under-representing countries joining the EU since the turn of the century. The role of the President of the European Council was also, curiously, absent from the game. This was rather significant for the session simulating Prime Minister Cameron’s (a role played by Sir Malcolm Rifkind) attempt to get his renegotiation agenda realised. The session demonstrated the central role that will be played by Donald Tusk if an agreement is to be reached in the negotiation end-game.

The after lunch post-Brexit vote session was enlivened by the emotions on display. Despite the best efforts of David Cameron (played in this session by Norman Lamont – and was the subtext here that the Prime Minister had been aged by the referendum campaign?) to keep negotiations for a new bilateral relationship technocratic, the assembled stand-in Heads of State and Government took the gloves off. The negotiation was marked by anger and disappointment. The tone had changed from treating the UK as wayward member of the club to a supplicant. No agreements were reached between the UK and the other member states by the end of the day.

One hallmark of the simulation was that the external world did not intrude. We were all – simulators and the audience – hermetically sealed in the simulation bubble. The former Prime Ministers, Ministers and Commissioners did not need to take account of the press, parliament, party or public to whom each member state will need to sell a deal reached with the UK government.

Did this deserve its billing as a wargame? No. Rather it was more of an extended roundtable debate between the participants. There was a lack of bargaining, logrolling or issue-linking in the manner which are the normal characteristics of EU negotiations.

Perhaps more interesting than its limitations as a recreation of the actual debates, is that the event did highlight another key aspect of the continuing public debate – namely the desire to shape the media narrative.

As Open Europe themselves note, the day attracted a very large amount of media attention, both in the UK and beyond. In so doing, they were able to highlight some of their wider work and to give others an opportunity to find evidence for their ideas and dispositions.

A good starting point for all of this is the first thoughts of Open Europe’s co-directors, who penned a list of take-away points the day after the event. The headline from this is that renegotiation is possible, but difficult, a point only underlined by the second half of the day, which showed very clearly the limits to other member states’ patience with the UK. Given the perceived closeness of the think tank to Number 10 – former director Mats Persson is now David Cameron’s EU adviser – that could be taken as an effort to reinforce a message that there is substance to the current negotiations. Certainly, beyond the bluster, the participants in the wargame did seem to be amenable to finding accommodations, albeit within limits. If the morning negotiation had gone on, then perhaps someone would have found a way to square some of the circles – especially on access to welfare benefits – which have long had the feel of problems that just need someone with a creative touch.

But as everyone knows, messages are not easily controlled. Hence different media outlets pounced on various remarks, each of which reinforced existing agendas: The Guardian was interested in Enrico Letta’s request not to hold a vote this June, when the refugee crisis might well be in full flow, while Bloomberg dwelt on the potential impasse of a post-Brexit negotiation, and CapX talked of the need to suffer for the decision to exit.

In all of this, the wider point is that there is no right answer to the renegotiation and referendum, only choices that have to be worked through. While the wargame did start to sketch out what some of those choices might be, it still ultimately remains for the general public to pick apart what the politicians propose and to make things work in real life.

Dr Simon Usherwood is a senior research fellow at The UK in a Changing Europe and a senior lecturer in the department of politics at the University of Surrey.

Professor Richard G. Whitman is a senior research fellow at The UK in a Changing Europe and a Professor of Politics and International Relations at the University of Kent.