We don’t need to leave the EU to control immigration, Mrs May 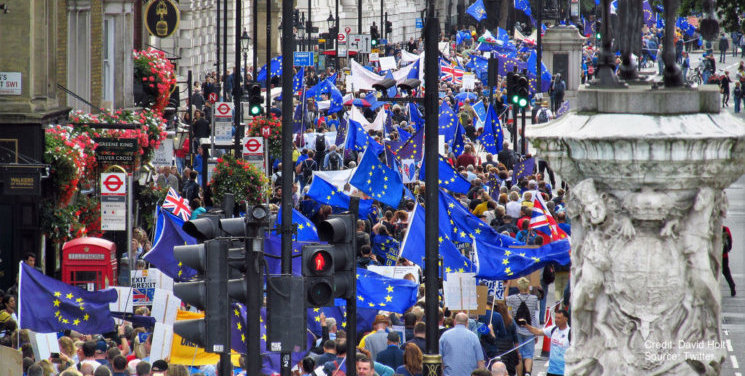 The dramatic events of last week have significantly increased the possibility of a “people’s vote” on Brexit. The case for such a vote has become compelling because the parliamentary arithmetic points to gridlock on the agreement reached with the European commission.

Theresa May’s personal demeanour, and the efforts of extreme Brexiters to scapegoat her for the probable failure of their project, have undoubtedly aroused much sympathy for her among voters. Some of that sympathy is justified.

Certainly, no other Conservative leader would have been better able to resolve the contradictions of Brexit. Despite holding positions of real government power, Brexit’s main leaders have been utterly unable to offer any realistic alternative approach.

However, most of the sympathy is unwarranted. The disastrous position in which this country now finds itself is the direct consequence of two fundamentally mistaken decisions that were May’s responsibility alone.

The first was the strategy launched at the Conservative party conference in 2016. This was explicitly intended to divide rather than to unite the country.

Despite the narrow 52-48 vote, she prioritised the dogmas of a small group of self-obsessed and introverted Conservatives ahead of the obvious economic and constitutional needs of the country.

This foolish strategy drew red lines under Britain’s continued membership of the single market and customs union, as well as denying any role for the European court of justice.

Her second miscalculation was to try to get that sectarian approach confirmed through a general election. But the country refused to endorse her approach, her parliamentary majority went missing and the Democratic Unionist party acquired an undeserved position of power.

These two errors created the framework for the predictable labyrinthine tangle she is now experiencing. One outcome is the possibility of another referendum.

However, May did get one very important thing right. She appreciated that large numbers of those who voted for Brexit did so because of concerns about free movement.

Remain campaigners struggled against the simplistic mantra of “take back control” and the momentum shifted to leave when, a month before the referendum, the Office for National Statistics published the latest net migration figure of 333,000 – a record level.

It is true, but doesn’t matter, that much of the concern about immigration was based on false information and dishonest marketing.

Nor does it matter that Brexit wouldn’t significantly reduce immigration, nor that many leading Brexiters do not care at all about immigration numbers, only “sovereignty”.

It doesn’t even matter that May’s own incompetence as home secretary fuelled many of the popular concerns. She promulgated the duplicitous target of reducing net migration to the UK to fewer than 100,000 (under her stewardship this actually increased, with a majority coming from outside the EU).

Her first act as home secretary was to abolish identity cards, a central mechanism to give citizens confidence in the governance and control of migration. And she contributed nothing to reducing migration into the EU by strengthening the external Schengen border.

Whatever the background, the unavoidable fact is that millions of people voted for Brexit because they felt immigration was outside their control. Their votes were decisive and would be again.

As a people’s vote becomes more likely, this central political fact needs to be taken directly into account. Advocates of a new referendum should seek to heal national divisions, not perpetuate and strengthen them. A new vote must not repeat May’s mistake of ignoring strongly held minority opinions.

Therefore, concerns about immigration have to be properly addressed – inside or outside the EU. We suggest the following measures to control immigration more effectively should be implemented.

First, we need tighter control of EU migration into the UK by applying current EU rules, which state that migrants must prove that they are either working, actively seeking work or self-sufficient. Otherwise, they can be removed after three months.

Other EU countries operate a worker registration system to implement this. In a similar way, the UK should require EU migrants to register with their local authority. Those without jobs should be required to return to their country of origin.

Sufficient resources for people and technology must be provided to enforce the migration rules properly.

Recruitment agencies should not be permitted to hire directly from abroad and, in high unemployment sectors, new jobs should first be offered to local unemployed people.

Third, we should re-establish a national identity system using new technology to establish secure digital identities for everyone. Among other benefits, this would make it easier to identify illegal migration.

Fourth, we need to contribute to far more effective control of the EU’s external border and better-resourced European policing coordination to strengthen enforcement against human traffickers and smugglers.

Fifth, in the event we remain in the EU, we need to tighten migration controls, for example by reforming the posted workers directive to ensure that companies bringing in workers from abroad pay at the local rate. An “emergency brake” system should be considered for periods of exceptionally high inflows.

Sixth, we should establish a well-resourced and focused migration impact fund to help local communities manage the impact of rapid population change.

This six-point approach to immigration is right on its own terms. Some of the measures previously rejected as too costly, bad for business or threats to civil liberties are nothing like as expensive or problematic as Brexit would be. We could achieve them more effectively inside, rather than outside, the EU.

Those who believe that a people’s vote is the best way out of the imbroglio in which the country now finds itself should make an effective approach to controlling immigration a prominent part of the public argument that needs to be made.

By the Rt Hon Charles Clarke and the Rt Hon Alan Johnson, former Labour home secretaries. This piece is co-published with the Guardian.