Weighing goods and services exports in the Brexit balance 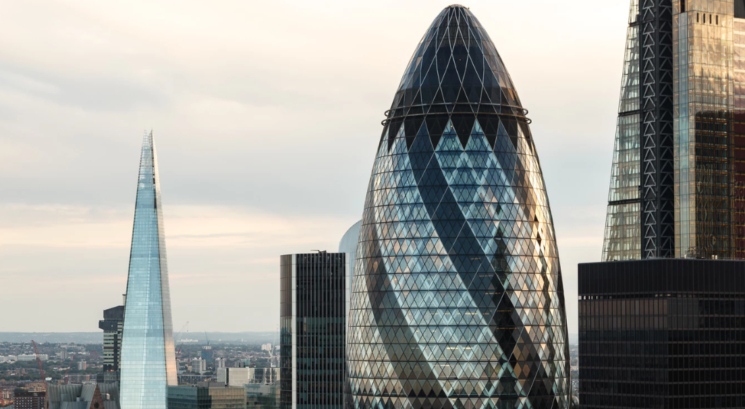 One interesting consequence of the 2016 EU Referendum and the subsequent political repercussions has been that international trade—previously perceived as a specialist topic debated mostly by economists and other experts—has assumed a central position in discussions among policymakers and in the media.

Much of the public debate on trade has focused on merchandise trade, which still exceeds services trade by a wide margin. The UK’s goods trade totalled £815bn in 2017, compared with £443bn for services trade (although the real picture is more nuanced, given the difficulty of accurately capturing the services elements embedded in various goods). So to some extent the public focus is understandable, especially since services trade is much less easy to picture than more tangible things like selling wine into overseas markets, for example, or buying furniture made in another country.

But the aggregate figures don’t capture the importance of services trade to the UK economy. UK exports of services accounted for 6.6% of global services exports in 2017, according to TheCityUK’s calculations using data from the UN Conference on Trade and Development (UNCTAD).

The UK has the second-largest services trade surplus and the second highest level of services exports in the G8, after the US. The UK’s surplus in services is equivalent to 81% of the merchandise trade deficit, providing significant support to the overall balance-of-payments position.

Last month I had the opportunity to highlight some aspects of the UK’s trade in financial and related professional services while giving oral evidence to the House of Commons International Trade Committee. My fellow witnesses and I talked about the extent of the UK’s competitiveness in services trade. Financial services exports (including those of the insurance sector) accounted for nearly one-third of total services exports in 2017. Although the popular perception is that financial services exports originate primarily from London, our latest economic research report shows that the industry is much more widely dispersed: financial services was the biggest exporting service sector in every single British region and nation except for the South East.

A popular perception is also that since many regions of the world exhibit faster rates of economic growth than does Europe, demand for financial services—and thus export prospects—are more robust in, say, Asia and the Americas than in Europe. But the reality is more nuanced. EU27 countries collectively account for 42% of UK financial services exports. (The US accounts for a further 21%.) 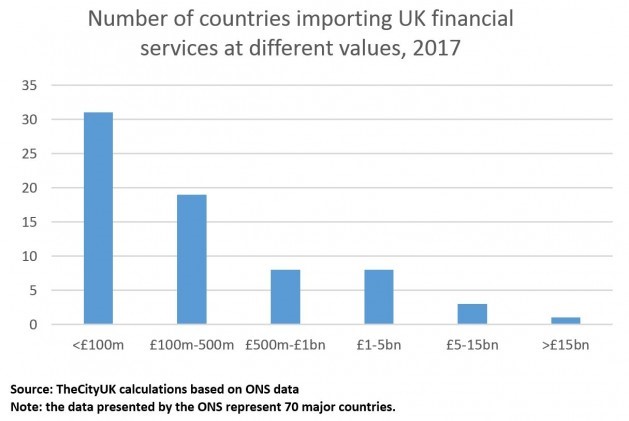 These data are all for 2017, but another notable aspect of the data is that the trend has been consistent in recent years: the top five destination countries have represented around half of exports since 2012 (which is as far back as the data go).

Is Brexit likely to change these trends? If UK-based financial services can no longer make use of passporting to provide services in the EU, is the industry more likely to grow its exports to non-EU countries and in particular, fast-growing emerging markets? In the near-term, demand will continue to come from other advanced economies purely because services trade is, broadly speaking, conducted among advanced economies. According to UNCTAD, ‘in 2017 developing economies exported services worth US$1.6 trillion, while exports from developed economies were valued at US$3.6 trillion, and those from transition economies US$122 billion’.

Another important point is that although rapid economic growth in developing economies offers the possibility of a medium-term boost to the UK’s financial services exports to these countries, fast growth from a low base means that in absolute terms, industry exports to these countries are likely to remain low for some time. If we look at the most prominent emerging market of all, we see that financial services exports to China were £340m in 2017—equivalent to 0.4% of total industry exports.

In short, the international competitiveness of the UK’s financial services sector is often under-appreciated—at least in the context of trade. But when considering possible future trade trends, the UK’s exporting prowess is only half the story. The other half—much less debated but equally worthy of examination—is the structure of import demand in overseas markets, and how it may change over time.

At the heart of the UK’s future strategy, recognising and delivering the close links between future economic prosperity and services cannot be ignored.

By Anjalika Bardalai, Chief Economist and Head of Research, TheCityUK.