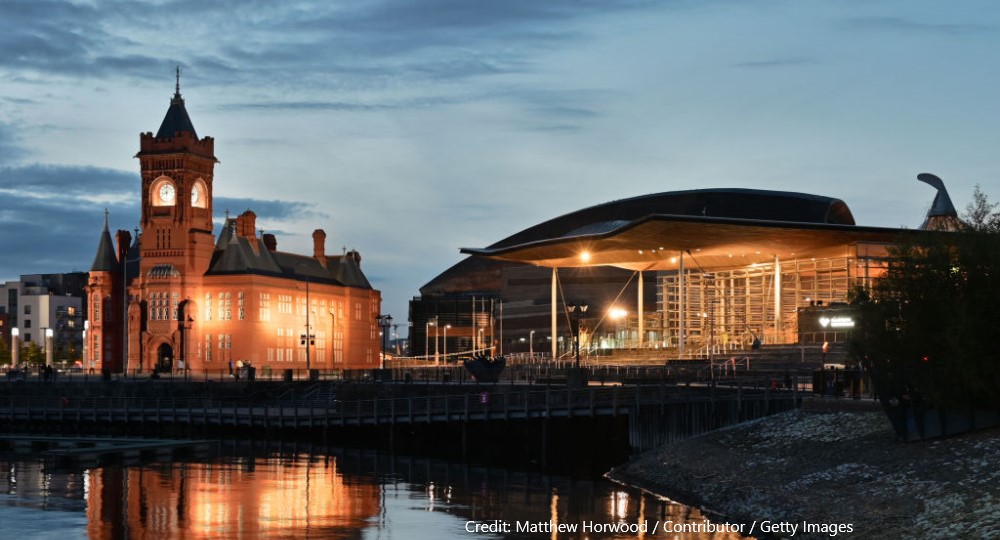 The establishment in 1999 of what is now formally known as the Senedd was the culmination of a century and more of argument in favour of what used to be known – more pleasingly, we suggest – as ‘home rule’.

These arguments were almost exclusively associated with the progressive side of Welsh politics, and here we examine the lessons that progressives outside Wales can learn from the experience of the past two decades of Welsh devolution.

Wales’ devolved institutions had an inauspicious start. Unlike the vote to establish the Scottish Parliament in 1997, the referendum in Wales was an altogether closer affair: a majority in favour of only 6,721 votes on a turnout of just over 50%.

Yet so-called losers’ consent for the result was earned in relatively short order. In fact, when presented with a list of options in surveys, a plurality of the Welsh electorate is consistently found to be in favour of more powers for the Senedd (see Figure 1). 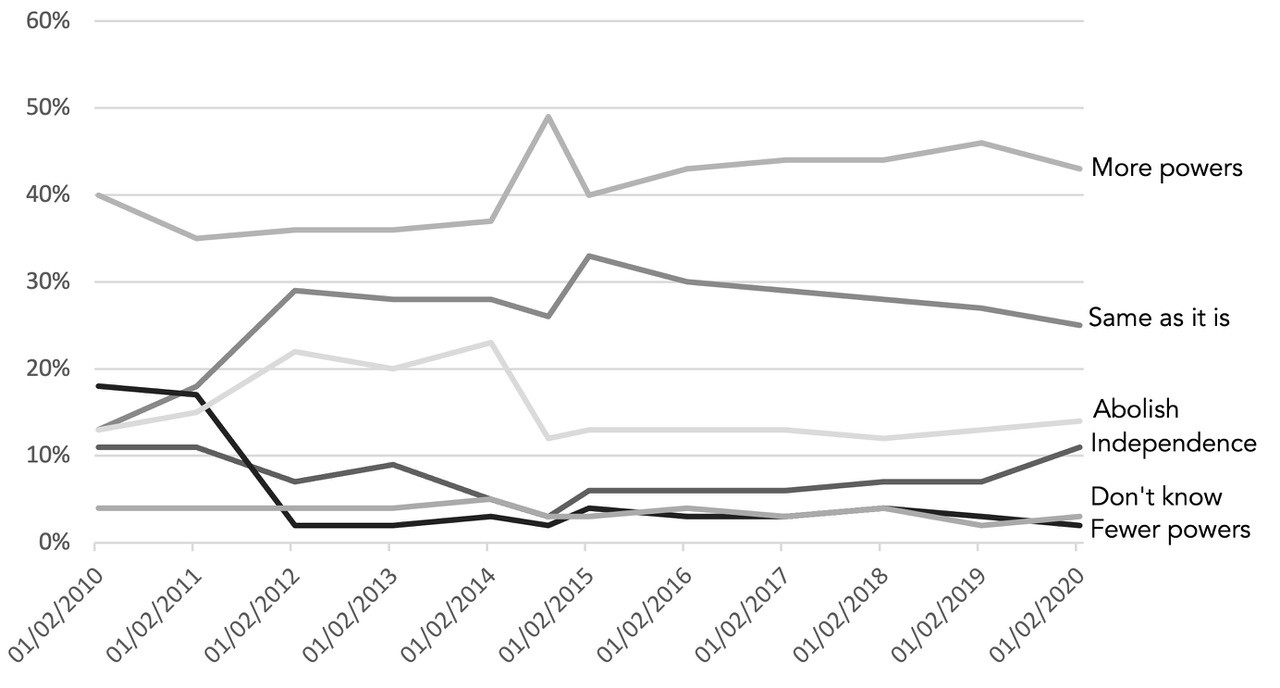 ‘Earned’ is important here. The politicians who had worked together to secure the referendum victory – a cross-party coalition consisting of parts of Welsh Labour, Plaid Cymru and Welsh Liberal Democrats – were deeply conscious of the fragility of the mandate they had won and worked assiduously to buttress it.

Not least by seeking to build Wales’ devolved institutions on a new, genuinely inclusive basis. Hence using the opportunity of devolution to improve on the country’s previously shamefully low levels of female representation; the stress on transparency; building a post-devolution political process far more accessible than that which preceded it; a more proportional electoral system.

2. but the Welsh model is not easily copied

That said, it is hard to see how the conditions that made that Welsh journey possible can be replicated on any regional basis within England, because of the extent to which support for devolution in Wales was based on – and then built out from – the existence of a strong sense of Welsh national identity.

Support for the principle of devolution has widened considerably since the 1997 referendum, but nonetheless it is this identity group that is most strongly supportive of home rule, including further measures of devolution up to and including independence (as Figure 2 shows). 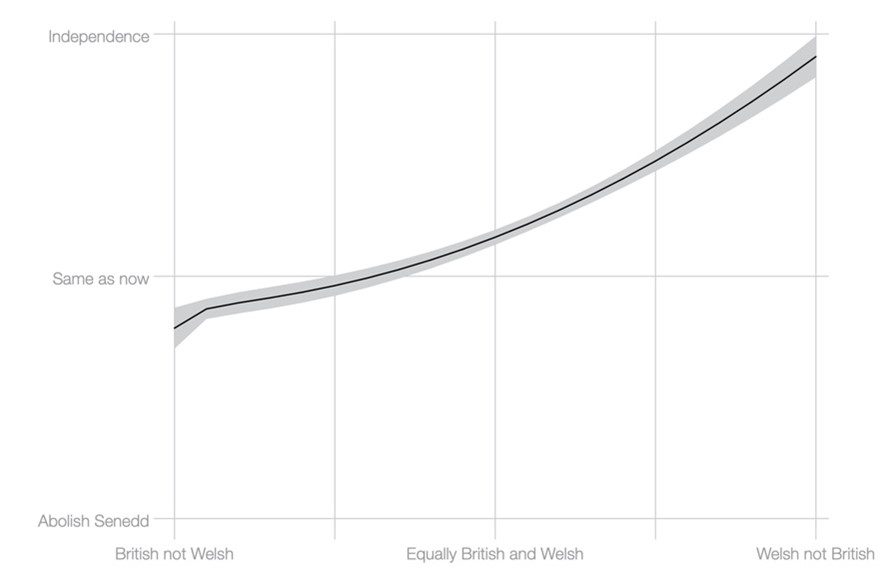 This is not a source of legitimacy and support available to supporters of English regional devolution. Especially in the context of the continuing (and in our view, politically disastrous) tendency of progressive supporters of devolution in England to view the establishment of a regional level of government as a safeguard against assertions of English political identity.

The paradox of Welsh devolution is that support for the principle of devolution has widened and deepened across the country’s population even if the history of constitution-building over the past two decades is best characterised as a series of failures.

The original model of executive devolution was so hopelessly inadequate that there have been multiple substantial changes in the constitutional settlement.

This perhaps helps to explain why, in policy terms, the story of Welsh devolution so far is – whisper is quietly – pretty unimpressive.

More significant, in truth, has been the ability of devolved institutions to block disastrous initiatives being pursued by successive UK Governments in England, such as PFI, the evisceration of local government, and marketisation even in settings where this is manifestly inappropriate.

The real lesson here is that piecemeal, incoherent efforts to decentralize power that ignore basic constitutional principles – that is, overwhelmingly the kind of ‘devolution’ we have seen in England over the past two decades – leads largely to an essentially defensive approach to policymaking and beyond that, frustration and stasis.

4. Progressives remain slow to engage with the transformational possibilities of devolution

Given that Wales has a stable centre-left majority in its devolved parliament and has been governed by the centre-left since 1999, one of the more puzzling features of this period is why progressive think tanks and other policy entrepreneurs have not made more of an effort to persuade Wales to act as a test bed for progressive policy ideas.

There are almost certainly contingent explanations for some of this. In the early years, the difficulties of doing anything constructive within the confines of the first round of devolution could well have acted as a disincentive.

It probably hasn’t helped either that the major expansion in powers and competences at the Welsh level has coincided with austerity, with less money available to fund such developments. Or perhaps Wales just isn’t seen as being significant enough?

What seems beyond doubt, however, is this lack of engagement by progressive policy thinkers must be regarded as an opportunity lost. If progressives are serious about devolution and decentralisation, surely it is high time that they walk the walk as well as talk the talk…

5. The first two decades were almost certainly the easy bit

Wales’s devolved institutions have managed the difficult task of transitioning from bodies with minimal powers and limited public support to being powerful actors in Welsh life enjoying widespread support and legitimacy.

Yet it also seems clear that the challenges facing Welsh devolution are likely to be even more daunting over the coming years. The country is now faced with a UK Government that is using Brexit as an opportunity to centralise power.

Indeed, through the UK Internal Market Act, it is now actively undermining the foundations upon which devolution has been built – all this without any clear or coherent idea of what new order might take its place.

Meanwhile the Welsh Conservatives have not only become increasingly strident in their support for anything and everything that the UK Government does, but would seem to be adopting a position whose logical conclusion can only be the unwinding of devolution.

The entirely predictable consequence of this is to push many in Wales in the direction of independence.

Perhaps the most striking sign of the mainstreaming of support for independence is that the most recent polling shows that around half of Welsh Labour’s supporters at the December general election – overwhelmingly its younger and more progressive supporters – would vote Yes if a referendum were to be called.

The country’s progressive home rulers are increasingly coming to the conclusion that the union undermines rather than facilitates their aspirations for the future of Wales.

By Richard Wyn Jones, professor of politics and director of the Wales Governance Centre and Jac Larner, lecturer in politics, both at Cardiff University. Richard is the principal investigator of the ESRC-funded Welsh Election Study, and Jac is a research associate on the ESRC-funded Welsh and Scottish Election Studies. A longer version of this piece is available here.