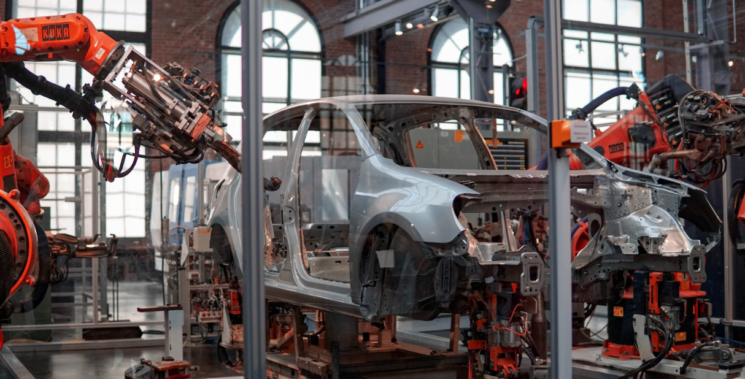 Automotive, rail and aerospace supply chains in the West Midlands are in a fragile position, given their exposure to logistics dependency on the Channel Tunnel and ports in the south-east of the UK.

That’s a key finding in our new report, Brexit and UK Auto, Rail and Aerospace: Understanding Logistics and Supply Chain. The report also suggests that tens of thousands of automotive, rail and aerospace jobs are at risk in the UK in the event of a no trade deal Brexit at the end of 2020.

Based on a survey over 200 firms in the region in late 2019 and early 2020, the research finds that transport manufacturers and suppliers in the West Midlands are particularly exposed to the operations of Jaguar Land Rover (JLR), given its dominance in the region.

They also have significant exposure to other manufacturers, including Honda – which has already announced its intention to close its Swindon plant by 2022.

A further important finding of the report is that supply chain firms in the region are highly dependent on EU workers: they account for on average 31% of the workforce of the firms surveyed – much higher than the average figure for UK manufacturing of around 10%.

This could pose recruitment challenges for such firms going forward, and raises issues about further devolving skills and training to the regional level to deal with such sector specific impacts locally.

This spills over into a reliance on certain transport routes: the firms surveyed are heavily dependent on the Channel Tunnel, with 17% of exporters and 14% of importers exclusively using it.

Firms also intensively use the ports of Liverpool, Southampton, Immingham and Felixstowe, placing additional pressure on regional transport networks in the event of a ‘hard Brexit’ that involves customs checks.

In this context, the reliance on the Channel Tunnel is a major risk factor for supply chain firms in the West Midlands. With a bare bones trade deal, even short customs delays could hold up such traffic.

And if even a small proportion of traffic from the Channel Tunnel gets rerouted, it will cause an increase in port traffic elsewhere, placing additional strains on an underfunded regional rail and road network.

Our survey found a mixed picture when it came to ‘Brexit readiness’ in these supply chain firms.

Many firms (89%) had stockpiled materials and had proactively informed employees about the settled status scheme. Of greater concern was the fact that only 24% had completed detailed and accurate activities around commodity code and product classification.

Similarly, only 16% of respondents felt that their organisation was completely prepared with the necessary skills to complete new customs paperwork related to trade with the EU. A large majority felt that they were at medium risk (70%), with the remainder of firms highly exposed on this front.

Transport manufacturing industries continue to be of vital importance to the UK economy. In 2018, UK auto alone directly contributed £16.9 billion to the economy, and represented over 9% of total UK manufacturing.

The pre-eminence of the West Midlands in automotive in particular is apparent from the maps below. The region accounts for about one-third of the UK total in employment terms.

However, in terms of value added the significance of the region is even higher, given the presence of a national strategic asset in the form of JLR, which undertakes substantial R&D and value-adding work in the local area.

This stands in contrast to some other vehicle manufacturers based in the UK, which largely only undertake final assembly. 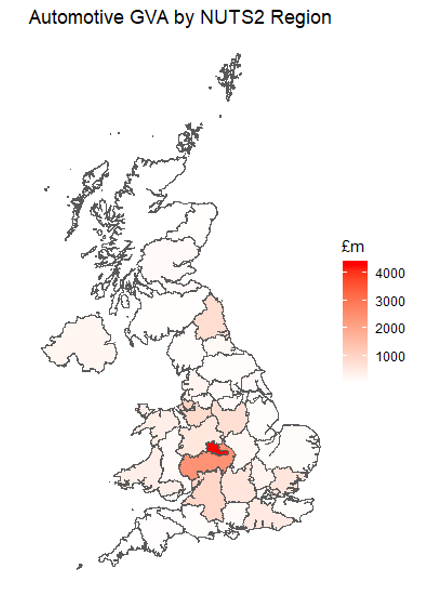 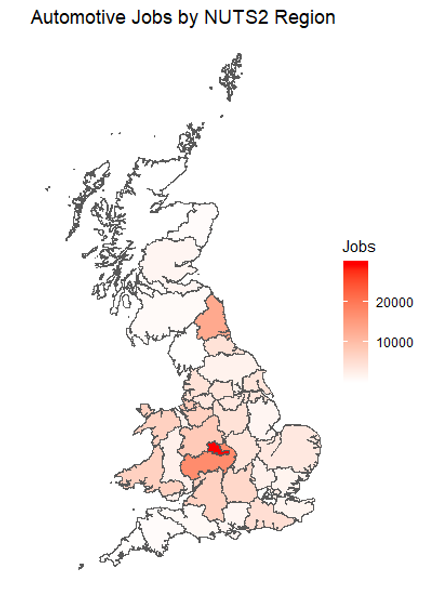 The West Midlands employs over 50,000 people in automotive alone and another 20,000 in related sectors.

Our analysis suggests that tens of thousands of jobs in the sector would be exposed in the event of a hard Brexit.

The costs of a hard Brexit (particularly a default no trade deal scenario at the end of 2020) would be considerable for JLR in particular – of the order of at least £1.2 billion a year for the firm according to its own estimates. This would be unsustainable with current UK operations.

A key message is that the impacts of a hard Brexit on the auto sector would likely have significant, and very localised, effects in the region.

That original target now seems like a distant dream, with the government already reportedly talking about automobiles being a ‘declining industry’.

The industry faces big challenges on a number of fronts, and there is a real need to reiterate the importance of the sector going forward. Not only is the form of Brexit critical for its future, but so too is a renewed effort in terms of industrial policy to seize the opportunities from the transition to electric vehicles.

This needs to include attracting a major battery plant to the UK, where the UK currently lags investment in Europe.

For policy makers a key message is that a trade agreement with the EU needs to ensure minimal disruption to the supply chain operations of manufacturers.

As the Australian experience demonstrates (as illustrated in our book Carmageddon? Brexit and Beyond for UK Auto), once these jobs are lost the skill sets disappear, which in turn will undermine efforts to make the UK a lead on green technologies such as the shift to electric mobility.

By David Bailey, Senior Fellow at the UK in a Changing Europe and Professor of Business Economics at the Birmingham Business School and Alex de Ruyter, Director of the Centre for Brexit Studies at Birmingham City University.