Westminster should acknowledge and respect the majority in Northern Ireland 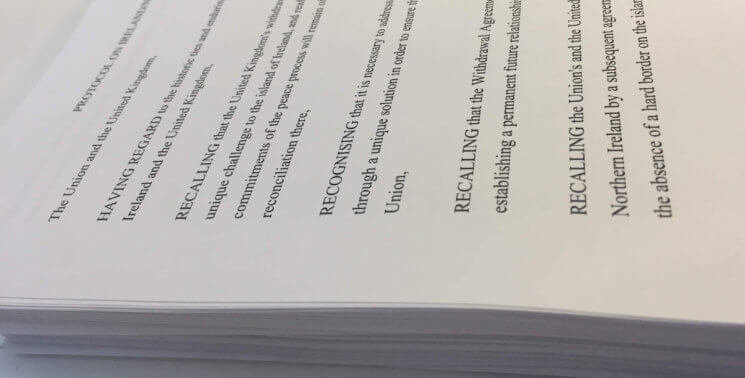 In the years since Northern Ireland began its slow journey towards peace, the shadow of political violence has substantially dissipated and for many people, life has been immeasurably transformed for the better.

In other ways however, progress has been slow. Relations between the two political blocs in Northern Ireland remain unstable – the collapse of the Stormont Assembly over two years ago is testament to a continued absence of trust. Relations are characterised by lingering disagreement and tensions that contribute to the ongoing polarisation of the two communities.

The UK decision to leave the EU initially antagonised those divisions and it has certainly deepened political polarisation in Northern Ireland. However, the question of how polarised Northern Ireland is on the Brexit question deserves some interrogation.

Northern Ireland and the Withdrawal Agreement

The deadline for the UK to leave the EU is just weeks away. The failure to agree withdrawal terms has been held up by disagreement about the now infamous backstop.

The backstop – which attempts to prevent the imposition of a hard border on the island of Ireland – has become the most contested and disputed of tools. It means fundamentally different things to different people.

The core unionist constituency in Northern Ireland feels deeply aggrieved by the inclusion of the backstop in the Withdrawal Agreement.

The unionist interpretation that the backstop spells trouble for the Northern Ireland economy and for the integrity of the UK’s constitutional position is not shared by other political, economic, sectoral and civic constituencies in Northern Ireland.

Four of Northern Ireland’s political parties support the backstop. This includes the two nationalist parties – the Social Democratic and Labour Party (SDLP) and Sinn Féin – and two smaller middle-ground parties, the Alliance Party of Northern Ireland and the Green Party. In total, these parties command 47 of the 90 seats in the currently suspended Northern Ireland Assembly.

The Irish government, itself a Brexit stakeholder, supports the backstop.

Various polls demonstrate that a majority of public opinion in Northern Ireland supports the backstop. In a December 2018 Luicidtalk poll, 65 per cent of Northern Ireland voters expressed support for a deal which allows ‘Northern Ireland to remain closely tied to the EU, inside the single market and the customs union, while Britain has a more arms-length arrangement’. This includes almost one-third of unionists.

A more recent Irish Times/Ipsos MRBI poll reveals ‘views in Northern Ireland on Brexit and the political management of it at Westminster cross the community divide’.

There is an understanding here that the backstop is an insurance policy – a practical and temporary means of preventing a hard border on the island of Ireland in the event that no future EU-UK relationship is agreed.

Not a case of ‘unionist’ vs. ‘nationalist’

It is patently obvious that the political blocs in Northern Ireland disagree fundamentally about the necessity for the backstop. However, the issue cannot simply be reduced to one which pits unionist against nationalist. Forces outside of politics, representing a cross-section of society, tacitly support the backstop.

This represents a step-change in Northern Ireland. Brexit and the backstop have polarised politicians, but the polarisation is less marked when we take a broader societal view.

Unionist politicians have legitimate concerns that their interpretation of the backstop is not shared more widely – and it is possible that one day, those concerns might prove to be prophetic. However, the unionist position does not enjoy majority support and it conflicts with the expressed interests of some of its own constituencies.

The absence of devolved institutions coupled with strong DUP influence in Westminster has resulted in a skewed form of representation for Northern Ireland at a pivotal moment in its history.

However, despite its evident toxicity, Brexit has somehow managed to elicit a limited degree of cross-community support in Northern Ireland for the Withdrawal Agreement and the backstop. In opposing the current withdrawal formula, the British government and Westminster MPs have chosen a course of action which conflicts with the preferences of a cross-section of Northern Ireland society.

This suggests a misunderstanding of the difficult journey from conflict to peace which Northern Ireland has traveled, and it signals a failure to acknowledge, nurture and reward signs of cross-community cooperation and agreement.

To disregard Northern Irish voices in this way begs questions about what responsibility the British government and Westminster feel to this most vulnerable part of the UK.

Let’s not forget that Northern Ireland is a society which is in transition from conflict to peace; a society where cross-community agreement is often elusive; and a society which stands to be deeply impacted by the Brexit process.

In a society where the achievement of peace has been long and slow and difficult, the emergence of some unity of purpose deserves to be respected. This presents the British government and Westminster with a stark choice: support the preference of the unionist minority or a tentative cross-community majority.

To deny the wishes of a cross-section of Northern Ireland society would be troubling, but even more alarming is the possibility that in the longer-term, such an approach will do even more damage to Northern Ireland (and to the UK) by fuelling deep disillusionment, likely accompanied by economic difficulties and also political instability.

As the clock ticks down to the meaningful vote, MPs face some stark choices. With representation come responsibilities, so now it’s over to Westminster…