What a responsible People’s Vote campaign should commit to 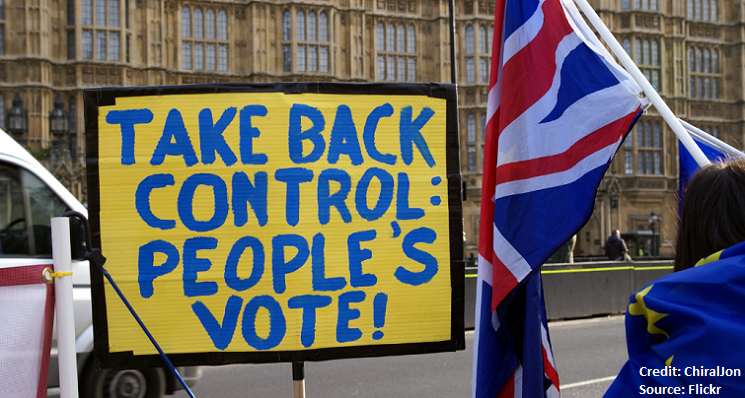 One thing has emerged clearly from the current political impasse over Brexit: direct democracy via referenda sits very uneasily with representative democracy in Parliament. And this conflict can have very damaging consequences to the sense of legitimacy that we hold for our institutions. Those advocating for a People’s Vote therefore must give serious consideration to how it would avoid the political mess that the first referendum has created.

What Brexit would mean in practice was never made clear, the parties themselves are split, and there is no majority in Parliament for any option. How can we be sure a second referendum will produce less of a mess next time? I am afraid that unless it is thought out very carefully, its effect may be catastrophically harmful for British politics and society.

Those arguing for a People’s Vote seem to think that another referendum will resolve the current impasse because Remain will win it. If that is the case, no doubt there will be significant and prolonged political estrangement from what will surely be a large Leave constituency. But at least in terms of how Parliament can then deal with the result, the way forward may be relatively easy: revoke Article 50, for which there would presumably be – though not necessarily – a majority in Parliament.

But the assumption of a Remain victory may prove false. A much bigger problem for the relationship between Parliament and direct democracy would arise in the event that a second referendum produced a vote in favour of no deal. At present, People’s Vote supporters appear to be discounting the possibility, with opinion polls showing Remain ahead. But they should not. Such surprises have happened frequently enough recently.

The dire economic predictions of Project Fear have not yet come to pass. Those who see in current economic data sufficient evidence of negative economic consequences from the threat of Brexit must also consider that employment is high, wages are growing, while the Eurozone may be in greater economic trouble. Hard Brexit may not be such an obvious economic mistake in the eyes of many.

And the economic argument is quite likely not going to be the most powerful one made by supporters of hard Brexit. More important will be the emotional arguments made about sovereignty, where nationalists have all the best songs.

Those arguing for a People’s Vote must not only consider the non-trivial possibility of hard Brexit winning. But they must also consider how such a decision would be implemented and its effects on our representative institutions.

Who will implement it? How will they implement it? And how can its implementation minimise the potential for further polarisation and disaffection? Supporters of a second referendum must surely plan for how to manage any of its outcomes to avoid the kind of political and institutional – as well as economic – mess that might result.

What kind of hard Brexit would be enacted? A free-market anti-regulatory ‘Singapore on Sea’ kind, which is probably the most rhetorically developed? Or a Labour hard Brexit, not yet much defined (if at all), but one that tries to ensure that the pain and any gain are more equally distributed?

For a Labour government, or any parliament for that matter, to refuse to implement a hard Brexit if it won would surely be unthinkable. The direct instruction from the people would be entirely clear enough and would not require much delay. Though even here, the question that is put will require much more careful consideration than last time. After all, the hard Brexit brigade is itself divided on whether it is a desirable outcome or a necessary bargaining chip if it is made credibly to secure a better deal.

So, we had better know which it is when we vote, with a clear basis for the extent and timing of any future negotiations with the EU, exactly what would be acceptable terms, and a hard deadline for leaving if these fail. Again, those calling for a settlement to the current impasse by direct democracy should responsibly be making clear how the complexities of such an outcome would be managed in the event that hard Brexit wins.

‘Be careful what you wish for’, therefore, might be the mantra for People’s Vote supporters to consider. This is not necessarily an argument against a second referendum. But it is an argument that says put in place the institutional arrangements and the political coalition that is capable of implementing the outcome that you would least like, if that is what a majority of the British public choose.

What might those institutional arrangements, and the political coalition, look like? The most obvious points stem from the failures of the first vote and its aftermath. First, make sure that there is clarity about what the vote is about.

Second, make sure to avoid a partisan hard Brexit. This may require a willingness to consider something like a national government to implement it, including broad representation if possible from Scotland, Wales and Northern Ireland.

Third, and building on the first two suggestions, commit to a set of policies after a hard Brexit which avoids reckless extreme right-wing economic solutions, but instead can rely on support from both One Nation Tories and social democrats across all parties.

Finally, a commitment to those points has one very obvious downside for Remain supporters of a People’s Vote, namely that sensible preparations to avoid the political and economic dangers of a Tory hard Brexit might sufficiently reduce public anxiety about that outcome and therefore make an alternative hard Brexit more likely. But the dangers of a hard Brexit in the wrong hands or without clear leadership are such that no one should responsibly call for a second referendum without planning for that possible outcome.

By Stephen Whitefield, Professor of Politics at Pembroke College, Oxford.