What can the Prime Minister’s government learn from the ‘Europe open for business’ campaign? 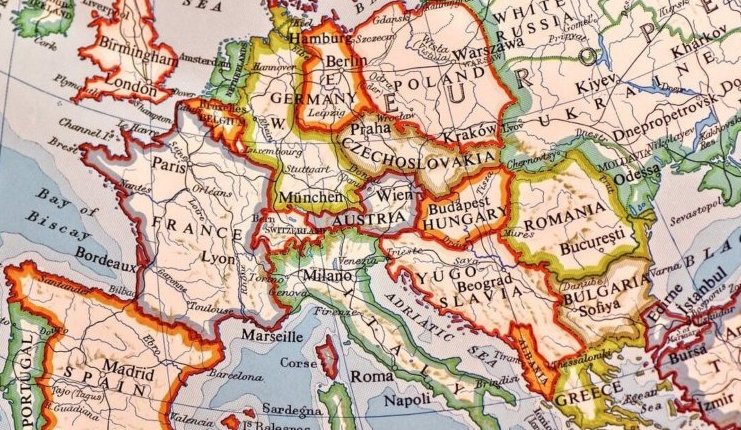 Mr Johnson’s government have been quick to announce a ramping up of preparations for a no deal Brexit. And part of their planned activities is a public information campaign to advise businesses and the public on the impact of such an eventuality.

According to Francis Elliott, Political Editor of The Times, inspiration for this will be taken from the ‘Europe Open for Business’ campaign, which Margaret Thatcher’s government launched in 1988 to drive business awareness of the planned completion of the single market at the end of 1992.

There is a degree of irony that a campaign aimed to promote a major European integration scheme is being used to inspire one directed at outlining the consequences of a no deal Brexit.

But, as Elliott noted, ‘Europe Open for Business’ is seen as having been a triumph. Certain evidence appears to support this claim too.

A National Audit Office report published in 1989 highlighted that awareness of the single market programme, which stood at only 16 per cent in the autumn of 1987, had reached the targeted level of 90 per cent in July 1988 – five months earlier than planned.

Lord Young, who as Secretary of State for Trade and Industry was responsible for the department overseeing the campaign, therefore seemed to be justified in boasting in his memoir, published in 1990, that it ‘succeed[ed] beyond our wildest dreams’.

However, documents relating to the campaign raise the question of whether the campaign was really such a resounding success.

The campaign did benefit from the high-profile support it received. Its launch, to which around 150 top business people had been invited, was held at Lancaster House in April 1988. Margaret Thatcher delivered the keynote speech, while European Commission President Jacques Delors also addressed those present.

A series of television advertisements were used to drive home the message too. As Alexander McKenna argues in his recent history of government communications, the 1980s was a decade in which significant amounts of public money were spent on television advertising.

‘Europe Open for Business’ was no exception: prominent business figures, including Alan Sugar, Richard Branson and Sir John Egan, featured in commercials extolling the benefits of the single market and encouraging businesses to take action to prepare.

The more minor, yet equally important aspects of the campaign had been thoroughly thought through as well.

Prior to the launch event, an introductory booklet was sent to all UK companies with ten or more employees. Subsequently, from May to December 1988 government ministers toured the country, addressing business people at a series of regional seminars.

The ‘Spearhead’ database was also set up, enabling companies to discover details of the latest single market measures being implemented. A telephone hotline was even established to deal with enquiries.

But the campaign was not as broad as the Department of Trade and Industry had hoped.

The DTI’s initial plan was for it to target the public, as well as businesses. In addition to the costs of the campaign, this aim encountered strong resistance from the Treasury. In March 1988 one official wrote bluntly to John Major, then Chief Secretary to the Treasury, that ‘Businessmen certainly need some years’ lead time to make preparations (for the single market), individuals do not’.

The Treasury appeared to win the battle over who should be targeted. And this was arguably a missed opportunity as public opinion regarding the single market failed to become more positive in the years leading up to 1992.

Instead, despite government and business enthusiasm, the British public remained lukewarm regarding the single market’s prospects. According to a tracking question included on Eurobarometer from 1987 to 1992, consistently between 36 and 43 per cent of British adults aged 18 and over considered the completion of the single market to be a ‘good thing’.

Throughout, a stubborn third of the population persisted in holding neutral views. 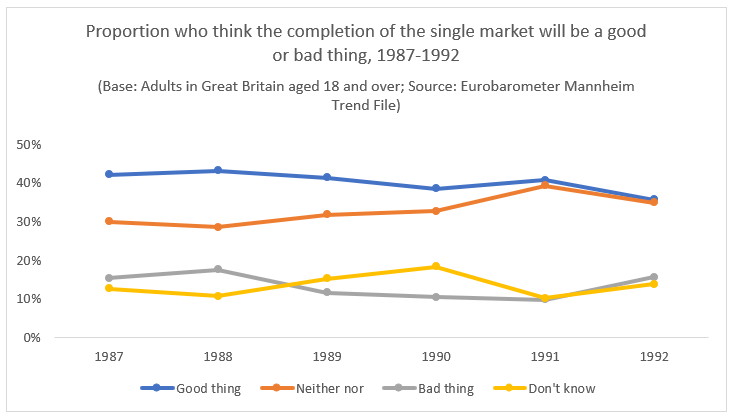 The campaign was also partly undermined by the Prime Minister.

In an internal memo, Stephen Wall, Head of the Foreign Office’s European Community Department (Internal), offered praise for Mrs Thatcher’s Lancaster House speech, but five months later came her Bruges Speech, in which she warned of a European super-state. The timing, in the midst of the campaign’s series of regional events, could not have been worse.

Speaking at a conference in Glasgow on 3 October 1988, Lynda Chalker, the Minister of State for Europe, was forced to counter the spin the press had attached to the Prime Minister’s now infamous speech. Unconvincingly, she argued that, rather than undermining the single market campaign, Thatcher had ‘underlined that our destiny is in Europe, as part of the Community’.

So what can the current government learn from the ‘Europe Open for Business’ campaign?

Unlike in 1988, the Johnson administration will benefit from the unity that currently appears to exist over European policy. Decisions regarding the campaign will also no doubt be made in the Cabinet’s Brexit committee with, importantly, the Prime Minister’s input.

This should theoretically allow the government to stay on message, something which was not the case after Thatcher’s Bruges intervention.

Chancellor Sajid Javid’s announcement of an extra £2.1 billion for no deal planning will also mean that, this time around, there will likely be little resistance from the Treasury to the amount being spent on a public information drive. Evidence from ‘Europe Open for Business’ and Eurobarometer suggests this will need to be targeted at the public as well as businesses too.

But there are notable barriers to success.

A lack of business support for no deal is a significant impediment.

It was certainly of benefit that, at the time of the single market campaign, the business community and government were more or less united on the same side. That cannot be said of the situation today.

Digby Jones, James Dyson and Tim Martin may be prominent Brexit-backing business figures who could lend weight to a no deal campaign. But with 78 per cent of captains of industry thinking no deal would have a negative impact on their business, the government is sure to encounter further resentment for promoting a policy that an overwhelming majority of directors – and a large portion of the public – view as being harmful.

Time is, of course, the most significant challenge.

The launch of ‘Europe Open for Business’ took place four and a half years before the target completion date of the single market. In contrast, just three months stand between now and Mr Johnson’s pledge to leave the EU by 31 October.

Revisiting the ‘Europe Open for Business’ campaign may therefore seem a sensible decision, but one which has been arrived at too late in the day to make any meaningful impact.