What do the public think about the backstop? 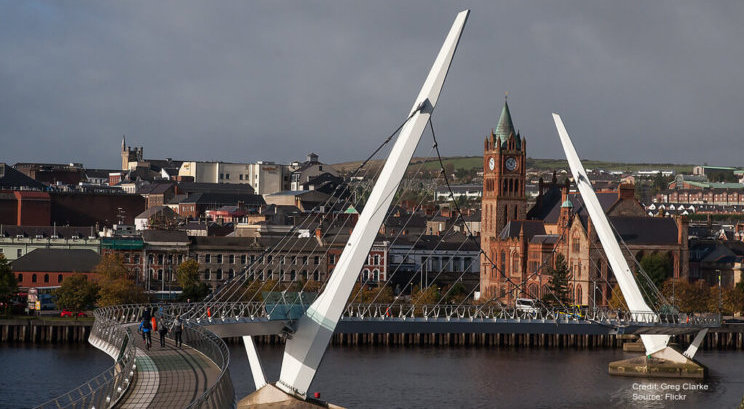 Is the Brexit borders puzzle in Northern Ireland a zero-sum game, in which one side’s win implies another’s loss? It certainly seems so. Unionist politicians desperately want to avoid any kind of economic border down the Irish Sea that may be triggered by the dreaded ‘backstop’.

Nationalists fear that succumbing to unionist demands to eradicate the backstop would open the door to a hardening of the north-south border.

However, as is often the case with seemingly intractable winner-takes-all squabbling, there does exist a compromise solution both supported by the public, and under which everyone could be a winner.

Research from a detailed report on public attitudes in 2018 showed both communities in Northern Ireland were supportive of the kind of soft UK-wide Brexit that would obviate any north-south or east-west border concerns.

This would involve the UK leaving the EU, but remaining in the (or a) customs union and single market.

This exit option was supported, as shown in Table 1, by 61% of all respondents, including almost identical proportions of Catholics (61%) and Protestants (62%), and was by far the preferred type of exit favoured by Remain voters (69%) and marginally the most preferred by Leave voters (44%).

Source: Northern Ireland and the UK’s exit from the EU

Such an (ultra) soft Brexit is, however, seen by many Brexiters across the UK, and indeed many hard-core Remainers campaigning for a further referendum, as the worst of all possible worlds.

The UK would have to follow EU rules but wouldn’t have any say over the creation of the rules– hence this option being characterised as BRINO (Brexit in Name Only).

But it could equally be called HEH (Happily Exiting Homogenously) in the Northern Ireland context, because the debate about the integrity of unionism is so much more salient in Northern Ireland than in Great Britain.

If an ultra-soft exit doesn’t gain UK-wide traction, how popular are the other exit options in Northern Ireland? Of particular interest is that Protestants and Leavers’ second favourite option was a hard UK-wide Brexit (no customs union or single market).

And their least favourite option was an exit in which Northern Ireland remained aligned to the EU but Great Britain did not, an option that would result in the feared economic border down the Irish Sea.

In contrast to the concerns of Catholics and nationalists over the potential hardening of the north-south border, Protestant anxieties over the possible emergence of an east-west economic border are arguably less understood, appreciated and empathised with.

A common interpretation is that there are already differences between Northern Ireland and Great Britain and so why would some additional differences be so threatening?

Northern Ireland is a distinct component of the UK, made more distinctive than the other devolved regions by the undertaking in the 1998 Belfast/Good Friday Agreement that it can re-unify with the rest of Ireland if a majority wish to do so.

Consequently, making Northern Ireland a bit more different – by having it potentially aligned closer to the EU than Great Britain on rather mundane regulatory matters – shouldn’t be seen as spelling the end of the UK’s economic and constitutional integrity.

Rather, such ‘special status’ for Northern Ireland would surely represent merely an increased loosening of the ties binding the UK together, a further stretching rather than snapping of the UK constitutional elastic.

However, the concern is that EU alignment would represent a leap into a new era in which an external actor – the EU – would be driving the nature and extent of differences between the component parts of the UK, hence posing an existential threat to the union.

Source: Northern Ireland and the UK’s exit from the EU

Examples of the way in which Protestant citizens articulate their anxieties about this possible new economic border are reported in Box 1. Potential alienation and separation from Great Britain are seen as anxiety inducing.

Also, analogous to possible protests against a hardening of the north-south border, citizens voice the possibility of active protest against the emergence
of NI-GB differences.

These would be similar to previous protests over flag displays in public buildings, and would likely to given greater momentum by fears of an emerging united Ireland.

In contrast to Protestants and Leavers, the second favourite exit option of Catholics and Remainers is one in which Northern Ireland is more closely aligned to the EU than Great Britain is. And their least favourite option is a UK-wide hard Brexit.

These contrasting views of Catholics and Protestants on the relative merits of a hard UK-wide exit or a (potentially) differential Northern Ireland exit map onto the current wrangle between the prime minister and the EU on a Withdrawal Agreement with or without a clearly defined backstop.

Whoever blinks first will determine the result of Northern Ireland’s ongoing zero-sum game.

By John Garry, principal investigator for The UK in a Changing Europe project. This piece originally appeared in ‘Brexit and the backstop: everything you need to know’, available here.