New deal, no deal, second referendum – what do women want from Brexit? 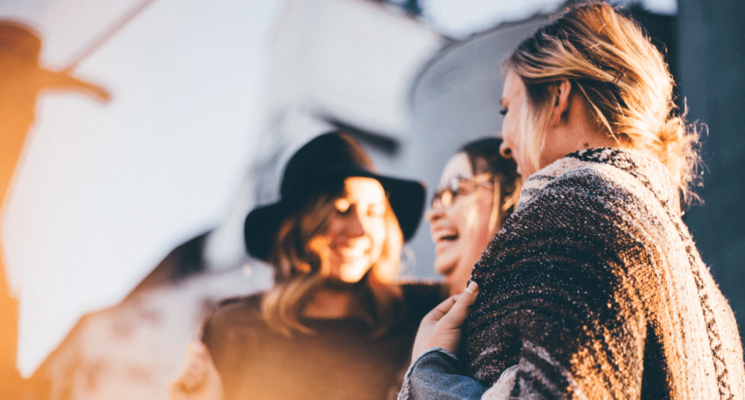 This week, MPs have once again voted down the deal negotiated by the government with the EU. What happens next – a variation on the current deal, no deal, or a new referendum – could be decided by Parliament in the coming days. There is lots of debate around what voters want from Brexit, but so far whether men and women have different preferences has received little attention.

Women have largely been under-represented during both the Brexit campaign and the Article 50 process. This has been noted by groups on both sides of the debate. Women for a People’s Vote (part of the People’s Vote Campaign) point out that there is only one woman on the negotiating team, whilst Ladies for Leave (part of Leave Means Leave) argue that 90% of parliamentary time dedicated to the withdrawal agreement has been taken up by men.

Both groups argue women are under-represented and make claims to be furthering women’s voices during the withdrawal negotiations. But they have radically different interpretations of what women want from Brexit. Women for a People’s Vote claims that 62% of women support a people’s vote or second referendum. They highlight that women’s economic situation and rights will be disproportionately impacted by Brexit, and this means that women might want the option to vote again on the question.

On the other side of the debate, Ladies for Leave, a group within Leave Means Leave, argue that eight million women voted for Brexit and that leaving the EU is their priority, even if that means reaching no deal with the EU.

Whilst these claims that women have been underrepresented during the campaign and the process have merit, we lack a sustained analysis of what women want when it comes to Brexit. What’s more, claims about what women want are clearly contested. Do they want a ‘clean break from the European Union,’ or a delay to the process and a second referendum? We take a look at the available evidence to assess these claims.

There is little to no evidence of a difference between men and women in terms of how they voted at the 2016 referendum. The British Election Study Internet Panel (wave 9, conducted June-July 2016) shows that there was no significant difference in the number of men and women voting to Leave (the gap is less than 1%). Ladies for Leave do therefore have a point: roughly half of leave voters were women.

Similar issues also mattered to both men and women in their Leave vote – especially immigration, the economy, and the sovereignty of Parliament. One of us (Fowler) also argues, as part of her doctoral research, that perceiving a positive effect of Brexit on public services and especially the NHS was an additional driver of Leave voting for women, whilst male Leave voters prioritised this less. Interestingly, women were more likely to be undecided at the start of the campaign, which suggests that aspects of the Leave campaign such as the pledge to fund the NHS instead of the EU may have been particularly attractive to some women.

If women were as supportive of Leave as men, have they now changed their minds and swung behind Remain or a second referendum? Data from recent surveys (see graph below) does now suggest that women are more pro-Remain than men, and have been since the start of 2019. The most recent polling suggests that more than 50% of women would vote Remain in a second referendum, whilst 37% of them would vote for Leave. Men are more evenly divided, with about 47% supporting Leave and 45% supporting Remain. 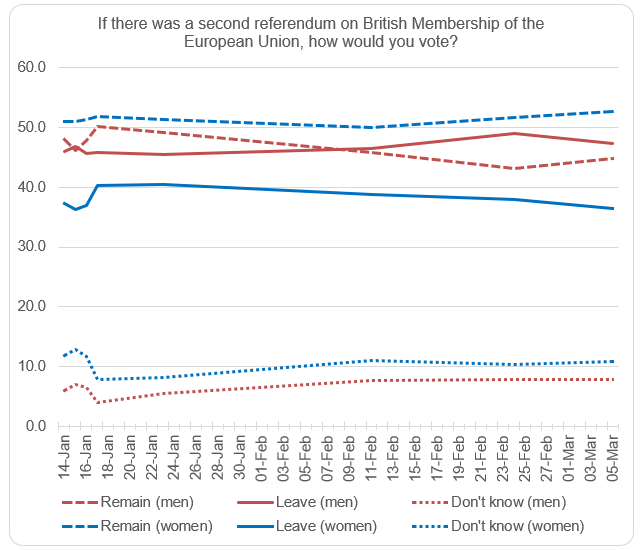 Source: available polling from January to March 2019 from YouGov, ComRes, Survation, Kantar/TNS, ORB and Deltapoll. Each data point is an average of the poll on that date and the previous two polls. 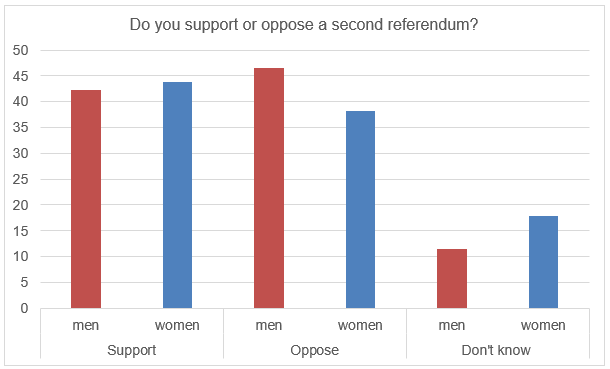 What about when we compare no deal with holding a second referendum? Opinium has asked questions comparing these options since February. Men’s preferred option is consistently to leave with no deal (50% of men). In contrast, only around a third of women have backed this option over the last month. Women’s preferred option is to delay article 50 and hold a public vote (46% of women). Once again, women are also much more undecided than men on what course of action should be taken. This pattern is consistent with the most recent polling conducted by YouGov for Leave Means Leave in early March. 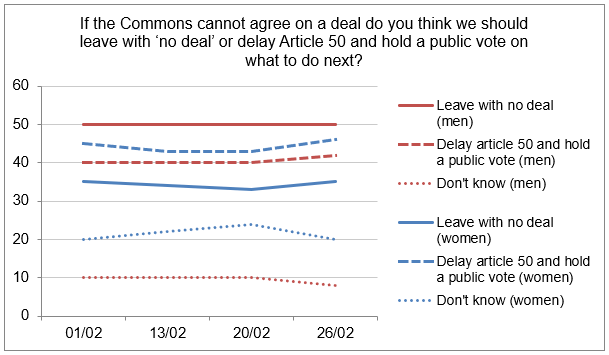 On the whole, then, neither Women for a People’s Vote nor Ladies for Leave are accurately representing women’s views. Women are in general more supportive of Remain than men, but so far this is not making them more supportive of a second referendum (although they are less likely to oppose one than men). They are, crucially, much less likely to support no deal than men. This could be related to concerns that a no deal Brexit would have a disproportionate impact on women. It could also be that women do not prioritise leaving the EU over other considerations to the same extent as men.

Finally, women are consistently more likely to say that they don’t know what the next steps should be – suggesting that both sides of the debate should focus more attention on trying to persuade women but also attempt listen to their specific concerns.