What does Boris Johnson’s frosty reception in Scotland mean? 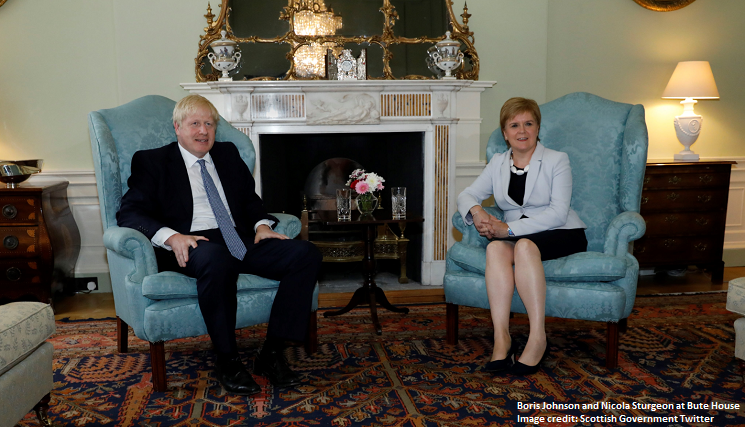 In contrast to Boris Johnson, Margaret Thatcher received a very positive reception on her first visit to Scotland as Conservative leader. Crowds mobbed her in February 1975 when she visited Edinburgh accompanied by senior Scottish Tories.

Boris Johnson had a very different reception in Edinburgh this week. After meeting Scotland’s First Minister in her official residence, pictured, he felt it necessary to avoid protesting crowds by leaving by a back door. His relationship with the Scottish Tory leadership is also wholly different: Ruth Davidson, Scottish Conservative leader, had accused Johnson of lying during the Brexit debate and has made clear her opposition to a no deal Brexit.

Like Margaret Thatcher, Boris Johnson assumes office as Tory leader with little knowledge or experience of Scotland. She had a tin ear when it came to Scotland despite working hard to understand Scottish politics and, and her efforts to align herself with the public north of the border. Johnson, on the other hand, came to Scotland remarkably unprepared this week, unclear on how many referendums there had been on Scottish independence.

His contribution to the 2014 independence referendum debate is unlikely to inspire confidence amongst his fellow unionists in Scotland. His emphasis was on the ‘British brand’. As he reportedly told an LSE audience in December 2013, ‘I was in Kuwait and watching a shopper buy underpants made in Devon, and that was because the shop had red, white and blue union flags outside and guardsmen in busbies guarding the door.’ Johnson’s humour does not travel.

Margaret Thatcher’s early Scottish support dwindled away. Her supporters eventually insisted that Scots simply did not understand her and that she needed more exposure in Scotland. In an interview in March 1990, Mrs Thatcher repeatedly referred to ‘We in Scotland’ in an ill-judged effort to associate herself with Scots. But the more Scots saw of Mrs Thatcher, the more they disliked.

Similar excuses are already being made for Boris Johnson. He is simply misunderstood by Scots. But more Prime Ministerial visits are likely to be warmly welcomed by his Scottish opponents. Ruth Davidson has had a long honeymoon with the media but that seems set to change as she faces endless questions about her views of the new Prime Minister and his policies and pronouncements.

The independence referendum boosted Scottish Tory fortunes. The union became a cleavage in Scottish politics as never before. This inflated the Tory vote as the Conservatives attracted unionists who had previously not supported the party. The SNP mopped up the vast bulk of independence support while the Tories gained the largest share of unionist support.

The ‘Conservative’ label has always been a problem in Scotland but the question of independence allowed the Tories to emphasise their unionism and play down their conservatism. The communication skills of Ruth Davidson – with her fondness for Johnsonian political theatricals – helped as the Scottish party rebranded itself. The opportunity and challenge was to translate its unionist vote into a Conservative vote.

The Scottish party has made little effort to do this. It has relied instead on the threat of another independence referendum to shore up its unionist vote. The polarised debate on the constitution worked to the Tories electoral advantage.

The Brexit referendum also initially benefited the Scottish Tories. The party captured almost half the pro-Brexit vote in the 2017 UK election in Scotland on top of its strong unionist support. This helped the Tories win 13 of Scotland’s 56 seats, up from the single seat held in every election since 2001. These MPs were presented as ‘Team Ruth’, reflecting the greater emphasis on the Scottish leader than the Conservative party in its campaign.

They were presented as a group that would vote as a block following Ruth Davidson’s commands. Brexit has tested that commitment to breaking point. Ruth Davidson had to switch support at almost every stage of the Tory leadership contest as one by one her preferred candidate was defeated until the person she least wanted as leader was elected.

Even before Boris Johnson became Prime Minister, the Scottish Tory bubble appeared to have burst. But this does not necessarily, or at least immediately, mean that support for independence will increase. There is a considerable leap from opposition to a Tory Brexit to Scottish independence. Brexit may accelerate the political divergence between Scotland and England but it also creates turbulence and uncertainty that may incline Scots to stick with what they know, despite misgivings, than add to what many will see as further change and uncertainty.

Boris Johnson has styled himself the Minister for the Union as well as Prime Minister. He has declared himself to be a ‘passionate believer in the power of the union’ who would work ‘tirelessly to improve lives’ across Scotland. While his passion for the union may not be in doubt, he has yet to convince many Scots that he cares about Scotland.

He will need to become far better informed. He will need to spend more time listening and responding positively to majority Scottish opinion and avoid any pretence that he speaks for ‘We in Scotland’.

By James Mitchell, Professor of Public Policy, University of Edinburgh.