What does Brexit mean for the UK’s party political kaleidoscope? 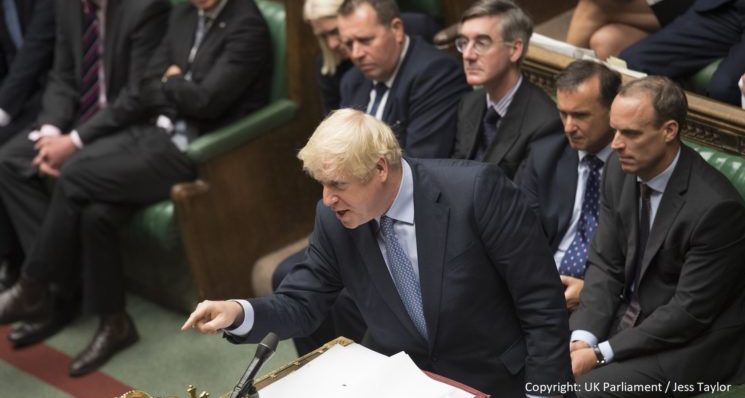 The 2019 general election gave the UK’s party political kaleidoscope one heck of a shake. Only time will tell where the pieces will eventually settle – if, indeed, they settle at all. Still, we can make out at least some parts of the emerging pattern. That task seems easiest when it comes to the colour blue – but perhaps only superficially.

Boris Johnson managed to win the kind of overall majority that would have been beyond the Conservative Party’s wildest dreams just six months ago. At the European Parliament elections in June last year it polled less than ten per cent of the vote for the first time in living memory.

Just as importantly, it looks as if the winner of those European elections, the Brexit Party, now poses little threat to the Tories’ hegemony on the right of British politics. But no one should be so foolish as to write off Nigel Farage.

If the UK’s political entrepreneur par excellence follows through on his plan to set up his Reform Party, then it could, given what is still widespread populist discontent with Britain’s political class, gain some traction – particularly if Brexit hits the economy hard and, or isn’t seen to change much.

At that point, however, a renewed insurgency on the populist radical right might be the least of the prime minister’s worries, since he may find that at least some of the new Tory intake, rather than constituting a cushion against the Brexiteer ultras who did for both Cameron and May, will join the ERG rather than provide an insurance policy against it.

If, then, the government finds itself facing a cliff-edge this summer, with the ERG demanding ‘a clean break’ and the rest of the parliamentary party understandably panicking about the prospects of ‘No Deal 2.0’, the Conservative Party, far from leading the country into a new golden age, could find itself even more split in 2020 than it was in 2019.

That said, there is at least a reasonable chance that a mixture of gratitude to Johnson and skilfully-employed parliamentary patronage may win the day, freeing up the head space and time the Conservatives need to address a couple of long-term questions – namely, how do they win back so-called Tory Remainers (namely those voters who have shifted over to the Liberal Democrats) and how, without abandoning the party’s commitment to a smaller, less regulatory and less active state, do they satisfy those voters in the so-called Red Wall seats and make the realignment of 2019 permanent.

As for the other pieces of the party-political kaleidoscope, the yellow part of the pattern also seems reasonably predictable. For the SNP, any disappointment at being unable to stop Brexit was mitigated (some might even say trumped) by the opportunity it now has to insist that the Tory government in London cede Scotland a second independence referendum. Indeed, the more minimalist the deal Johnson ends up negotiating with Brussels, in some ways the better for the Nationalist cause.

Sure, the 47 SNP MPs in the Commons will take an eagle-eyed interest in the details of that deal. But their main focus will be on whipping up support for the party in advance of the 2021 elections to Holyrood, knowing that a big win on a manifesto calling for a referendum will put huge pressure on Westminster and Whitehall to grant what will at that point look to many voters (in all parts of the UK) as their wholly legitimate right to self-determination. Whether the Conservative Party really would stick to its current refusal to contemplate giving the Scots another chance to break it apart, is a moot point.

As for the other nationalist (and, in the case of Northern Ireland, unionist) parties they, too, will be focused as much on their own political institutions as on the consequences of any deal (or lack of one) for their economies.

They remain, of course, a part of the pattern formed by the party political kaleidoscope – but not, perhaps, as important a part as when the DUP supposedly (and, as it turned out, only supposedly) had the Conservatives by the proverbial short and curlies in the wake of the 2017 election.

The penultimate – orange or yellow – part of that pattern will also be less important than many might have forecast last year. The Lib Dems returned only 11 MPs – the significantly increased number of second-place finishes they racked up providing precious little consolation for expectations dashed.

Quite where they go from here is not clear. A new leader – possibly the newly-pansexual Layla Moran – could help turn things around. But perhaps the best advice would be to go back to their constituencies and prepare for (local) government.

Finally, we turn to the most unpredictable, red, part of the pattern formed by the post-election party political kaleidoscope. The fortunes of the Labour Party would seem to depend hugely on the result of its leadership contest, with the winner to be announced in March.

Should Labour plump for some kind of continuity-Corbyn candidate, then, in the minds of the moderate bulk of the party’s MPs at least, all hope of a swift recovery (indeed any recovery at all) may be lost.

Their consequent despair could (again, ‘could’ not ‘will’) perhaps prompt enough of them (namely a sufficient number to allow them to become Her Majesty’s Opposition) to set up a new centre-left party (perhaps absorbing the Lib Dems) to see it succeed where Change UK (remember them?) failed so miserably.

If, on the other hand, Labour ends up picking a more obviously voter-friendly candidate like the current front-runner, Keir Starmer, then its long-term (if not necessarily its short-term) prospects are possibly a little brighter – especially if the party can be made to realise that it has to be more than a trade union-based pressure group for the poor, the public sector, and the ‘woke’.

Even then, much will depend on how Labour’s new leader handles Brexit. The key will presumably be to make it clear to the electorate – as Starmer, to be fair to him, already has – that Labour now accepts that we have left and that the focus now has to be on holding the government to account for whatever comes next.

Precisely what that will be, will gradually become clearer after 31 March. Whatever, it is is unlikely to make for plain sailing for any of the UK’s political parties. The kaleidoscope may end up being shaken once again – and sooner than we think.

By Professor Tim Bale, deputy director at The UK in a Changing Europe. This piece originally featured in the New Statesman. You can read the full report Brexit: what next? here.