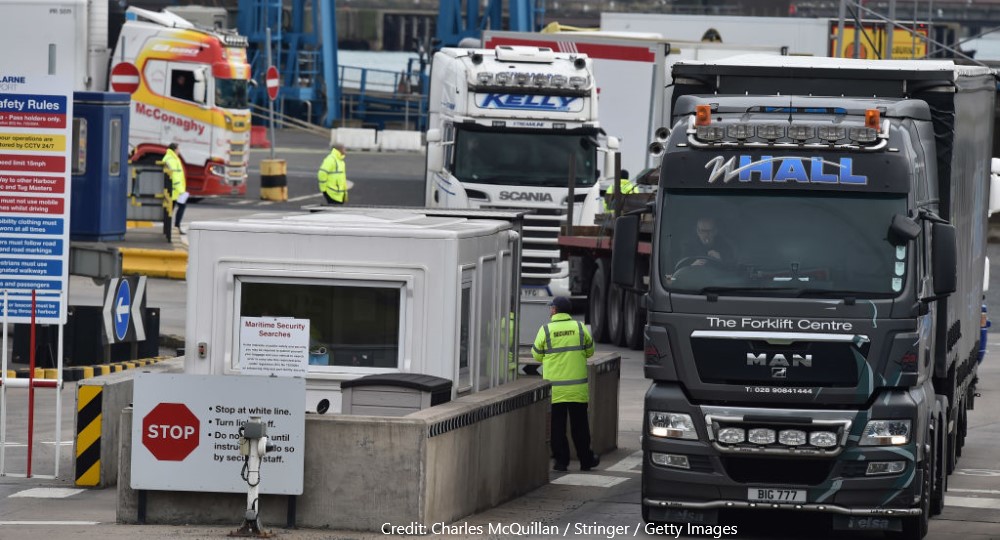 Brexit is widely regarded as done and dusted – though the latest Redfield and Wilton Strategies/UK in a Changing Europe poll today suggests voters in Great Britain are still more or less evenly divided between those who would (49%) and those who would not (51%) reverse Brexit. However, one issue that is certainly still to be fully resolved is the one on which Brexit negotiations have repeatedly stumbled – Northern Ireland.

This agreement, known as the Northern Ireland Protocol, has proven highly controversial. Many unionists (many of whom backed Brexit in 2016) object in principle to the creation of a ‘border across the Irish Sea’. The UK government (and yet more unionists) believes the EU is implementing the protocol too strictly. Long running talks with the EU have so far failed to reach a conclusion. On the other hand, most nationalists (most of whom voted Remain) believe the protocol needs no more than a little tweaking. These stances have ensured the subject has been a key issue in this Thursday’s NI Assembly election.

But what do voters in the rest of the UK make of this issue? How much support and opposition is there to the key provisions of the protocol? Does the issue divide Remain and Leave voters as it does in Northern Ireland? And what impact do voters believe Brexit is having on Northern Ireland’s membership of the Union?

The latest Redfield & Wilton poll suggests (as did the previous poll in February) that, in contrast to views in Northern Ireland itself, there is little support for Northern Ireland having a different Brexit settlement from the rest of the UK. Only 18% say it is right, while 38% believe it is wrong. However, the most popular response, given by 44%, is either that it is ‘neither’ right nor wrong (22%) or do not know (22%) – an indication perhaps that this is not an issue that concerns voters in Great Britain in the way it does those in Northern Ireland.

Meanwhile, on the crucial question of whether or not there should be checks on goods passing from Great Britain to Northern Ireland, public opinion in Britain is close to being evenly divided. While just 30% support such checks, only slightly more, 32%, are opposed. Again, around four in ten either say they ‘neither support nor oppose’ such checks or that they do not know.

Still, checks between Great Britain and Northern Ireland are more unpopular than having them between Northern Ireland and Ireland – even though that was the one outcome UK and EU negotiators both sought to avoid. While no more than 31% support checks at the border, only 17% are opposed.

Against this backdrop, it is perhaps not surprising that supporters and opponents of Brexit in Britain do not have sharply different views on the Northern Ireland Protocol. True, those who say they would vote to rejoin the EU (26%) are more likely than those who would back staying out (14%) to say that it is right that Northern Ireland has a different Brexit settlement. Even so, ‘rejoiners’ are still rather more likely to say that it is wrong (32%) than right (26%).

Even this modest difference does not translate into differences of outlook on border checks. While 30% of ‘rejoiners’ support checks across the Irish Sea, so also do 27% of those who would stay out. Similarly, support among the two groups for checks at the Irish border stands at 31% and 37% respectively.

In particular, although among Conservative voters opponents of checks across the Irish Sea (38%) outnumber supporters (28%), the issue apparently lacks for many the resonance it appears to have for many Conservative MPs.

Voters are also far from sure that Brexit has had much impact on Northern Ireland’s status within the Union. True, slightly more believe that Brexit makes it more likely that Northern Ireland will join a united Ireland (27%) than believe it has helped cement its place in the UK (19%). However, over half (53%) either believe it has not made any difference (27%) or that they don’t know (26%). ‘Rejoiners’ (36%) are only somewhat more likely than those who want to stay out (23%) to say that unification has become more likely.

This picture stands in sharp contrast to voters’ perceptions of the impact Brexit is having on the chances of Scotland (also polling this Thursday, for local elections) becoming independent. Among voters in general, nearly half (46%) think Scottish independence is now more likely, while only one in six (16%) take the opposite view. Meanwhile, three-fifths (60%) of ‘rejoiners’, think that independence is now more likely, compared with less than two in five (37%) of those who would stay out.

Northern Ireland may have been the thorniest issue in the Brexit debate, yet it seems that that status is not reflected in the level of concern or division among voters in Great Britain. Perhaps that is something that the UK government needs to bear in mind as it considers its next steps in its attempt to secure reform of the protocol?

Professor John Curtice is a Senior Fellow at UK in a Changing Europe.

This piece is also published on the What UK Thinks website.