What does the Withdrawal Agreement actually do? 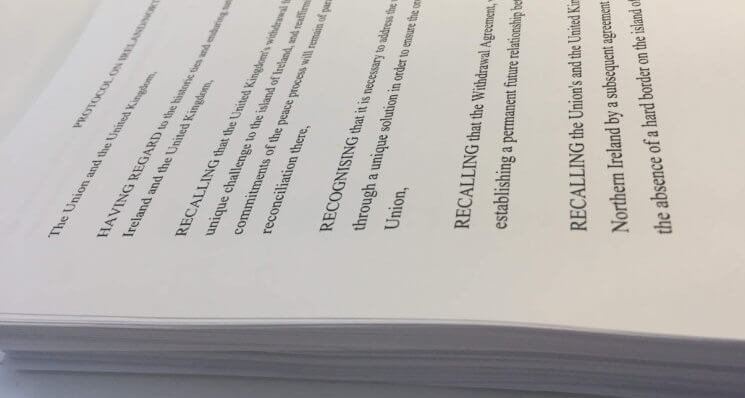 What would the Withdrawal Agreement do (and not do) if ratified? Here’s a brief overview.

The UK must also pass an Act of Parliament to give effect to the Agreement. This is above and beyond the ‘meaningful vote’ on the agreement in Parliament. All references to EU law require it to be interpreted in accordance with the normal rules of EU law, including ECJ case law delivered before the end of the transition period (see Catherine Barnard’s piece in this volume on the continued applicability of EU law).

Part two (Articles 9-39) guarantees rights for those EU27 citizens in the UK, and UK citizens in the EU27 before the end of the transition period, during which free movement of people will continue. In principle, they will retain the same rights, including on social security coordination and the recognition of qualifications.

Some aspects of their legal status will change though. The UK or EU27 member states may require them to apply to prove their right to stay. The UK in particular will implement this by means of a ‘settled status’ scheme. The risk is that some people will not have the documentation to prove their right to stay. Some categories of people currently covered by EU law will not be covered by the Withdrawal Agreement, so their position will be up to UK law. The rules on family reunion and expulsion for criminal offences will also become stricter.

Part three (Articles 40-125) sets out the details of phasing out the application of EU law in the UK at the end of the transition period. The biggest difficulties were over geographical indications (for instance, protection for those who call their product ‘Parma ham’) and what happens to cases pending before the ECJ on Brexit day.

Part four (Articles 126-132) provides that EU law still applies to the UK after Brexit day, until the end of 2020. The period may be extended by a single period of one or two years. EU law (including new EU law) will apply to the UK, except in areas covered by UK opt-outs (such as the single currency and Schengen).

There are special rules on external relations: for instance, the EU will notify non-EU countries that the UK should still be regarded as covered by EU free trade agreements, although the non-EU countries aren’t obliged to agree to this.

However, the UK will not be represented on any EU institutions or bodies. The UK will only be consulted on new EU measures as a special exception. In one area – foreign and defence policy – the UK can refuse to apply new EU measures if it has fundamental objections to them, and the Withdrawal Agreement foresees an early treaty between the EU and UK that will replace the transition period rules.

Part five, on the financial settlement (Articles 133-157), incorporates the earlier agreement that the UK takes part in the EU’s spending until the end of the current budget cycle (December 2020). If the transition period is extended, the UK and EU will negotiate a separate EU contribution to the EU budget. It also includes UK payments to the budget incurred because the EU often makes financial commitments in one year and then pays them out in later years.

Part six (Articles 158-185) sets up a Joint Committee to oversee and implement the Agreement. It can take certain decisions to add to the Agreement – such as an extension of the transition period – but for all these decisions the EU and UK must both agree.

Dispute settlement rules provide for arguments about the Agreement to go to a panel of arbitrators. However, if the arbitrators have to decide an issue of EU law when settling the dispute, they will have to ask the ECJ to give a ruling.

Finally, the protocol on Irish border issues includes the UK-wide customs union backstop, part of which is specific to Northern Ireland. This includes a ‘level playing field’, which means some degree of continued harmonisation of law relating to tax, the environment, labour law, state aid, competition, and public companies/monopolies.

The protocol also contains provisions on the UK internal market, as well lists of specific EU laws that apply in Northern Ireland: product regulation, VAT and excise tax, agriculture and the environment, a single electricity market, and state aids. There’s also a vague reference to other north/south cooperation.

Could the UK have negotiated a different Withdrawal Agreement with the EU? Some provisions might be different, if the UK’s settled intention from the outset was to continue participation in the single market and/or agree a customs union with the EU. But without either side changing their ‘red lines’, it is hard to see how the agreement could look very different.

By Professor Steve Peers, part of the UK and EU immigration policy team at The UK in a Changing Europe. This article is from our ‘Article 50 two years on’ report.