What happens to the border if there’s no deal? 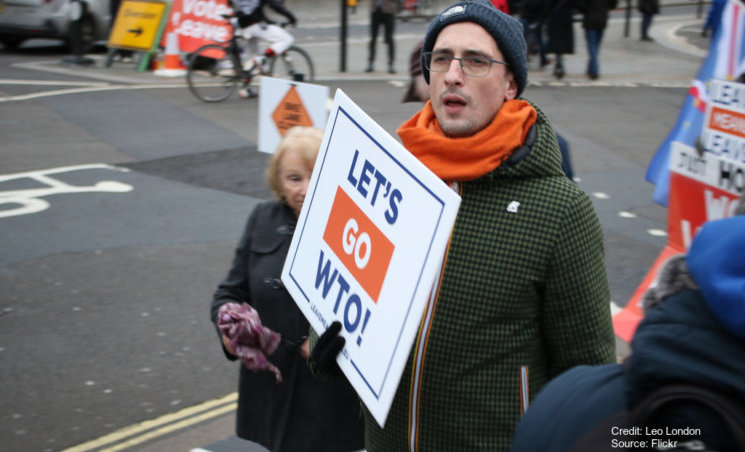 The commitment to ‘avoiding a hard border’ on the island of Ireland has been repeatedly made by both the UK government and the EU since the Article 50 clock was set ticking.

As was set out clearly in the December 2017 Joint Report, and then confirmed in the Protocol on Northern Ireland/Ireland in the Withdrawal Agreement, this aim is inseparable from three other priorities: addressing unique circumstances on the island of Ireland, maintaining the necessary conditions for continued north-south cooperation, and protecting the 1998 Agreement in all its dimensions.

Although this adds complexity to an already knotty problem, it is imperative to acknowledge that people on the island of Ireland do not have the luxury of considering what happens at the Irish border as a merely technical exercise around customs and trade facilitation.

When people of all generations and communities on the island think about the future Irish border, their views are unavoidably infused with memories of past conflict, awareness of opposing views on the constitutional status of Northern Ireland and fears about the potential re-emergence of violence.

In a Lord Ashcroft poll in 2018, two thirds of respondents in Northern Ireland thought that a hard border would lead to increased paramilitary activity.

When a hard border is discussed in British media and politics, however, the debate is generally couched in terms of trade.

The real issue, however, is how it might be possible to avoid, at the UK-EU land border, any negative consequences generated by the UK leaving the EU for the common ground between rival parties that EU membership has generated.

What might these consequences be? First, there are obviously implications for trade. If the UK is not in a customs union with the EU, the Irish border becomes a customs border.

This means that those trading across it would have to be registered to do so. They would also have to make customs declarations on all goods being transported. In many instances, tariffs would have to be applied to these goods.

These can be ‘ad valorem’, charged as a percentage of the value of the goods; unit-based charges, by quantity or weight; or both. As well as tariffs, excise duties
and VAT will have to be paid on entry to the other jurisdiction – another layer of bureaucracy for traders to manage.

WTO rules don’t get around any of this. What they do mean is that, if the UK decides to waive tariffs and quotas for goods coming from
the EU, then it would have to do the same from goods from virtually all other countries too.

This may lead to cheaper goods, but it would also be a severe blow to local manufacturing and production. And let us not forget that the EU will still impose tariffs on goods coming from UK– so goods crossing that border would still have to undergo customs procedures.

The challenge of managing a customs border is multi-layered. Not only do we have to be able to facilitate legitimate trade (e.g. make customs declarations and the payment of tariffs as smooth as possible), we also have to be able to tackle the illegitimate movement of goods.

The greater the divergence between the UK and the EU (i.e. the higher the tariffs), the greater the incentive for smuggling. This means losses to public revenue in terms of unpaid duties, but, more important, is the harm caused to legitimate traders, whose prices would be undercut by contraband goods.

It also poses risks to consumers through unchecked goods coming onto the market and contributes to the funding of criminal activity.

The fact that smuggling is already a problem in the Irish border region should mean we prioritise the protection of legitimate businesses after Brexit, rather than adopting a blasé attitude that increased smuggling won’t really matter.

Secondly, if the UK is outside the single market, it means that there can be no automatic assumption that UK goods are of adequate standard to be sold in the EU.

For example, if there are divergent regulations between the UK and the EU on food standards, animal feed, energy, medicines, medical equipment, food labelling, etc., this will lead to the need for checks on goods being produced in Northern Ireland making their way into the wider single market.

The consequences of this are particularly onerous for agri-food and agricultural products. Strictly speaking, many of these will have to enter the other jurisdiction through Border Inspection Posts, which would need to be created.

And that is not the only challenge. As the no deal preparatory notices issued in recent months starkly demonstrate, EU membership has implications across a wide range of sectors in society.

Many of these have a direct impact on daily life in the Irish border region. For example, the Single Electricity Market on the island of Ireland operates within the framework of common EU rules and mobile phone roaming will, as we have recently heard, be affected by a no deal outcome.

Bilateral arrangements can help smooth the transition in areas in which the two governments retain competence, and good progress has been made on these already. But they can only get so far.

The truth is that both the UK and EU will be required to manage the Irish border according to the conditions of international law and norms that will apply. And these would have a brutal effect on what is, currently, both a remarkably open and a stubbornly contentious state border.

It is sensitivity to this fact, and awareness of the practical and political complexity that has made the UK, the EU Commission and Ireland so loathe to spell out what would have to be done to manage the Irish border in a no deal scenario.

It is not that they could simply choose not to do so, but rather that only fools would rush in.

By Dr Katy Hayward, reader in Sociology at Queen’s University Belfast. This piece originally appeared in ‘Brexit and the backstop: everything you need to know’, available here.