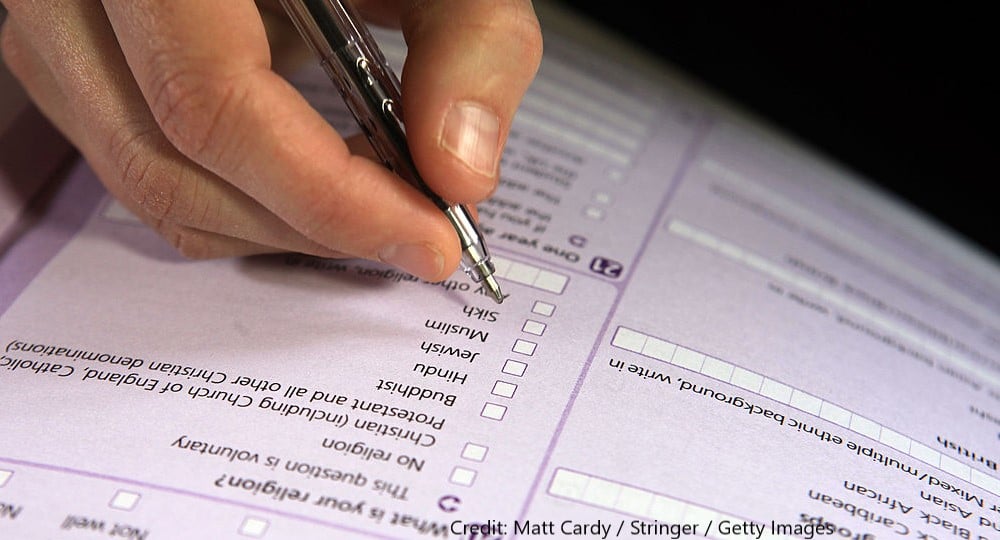 Madeleine Sumption and Peter Walsh look at what the new Census data tells us about migration, highlighting that EU migrants made a larger contribution to the growth in the migrant population in the 2010s than in previous decades, prior to the introduction of the post-Brexit immigration system.

Once a decade, we get a really good snapshot of the migrant population from the Census. The data for England and Wales came out this week. What have we learned?

First, the headline figures. The number of people born abroad increased by 2.5m in England and Wales between 2011 and 2021, from 7.5m to 10m. Is this a big number? Compared to other high-income countries it is pretty average. The 33% increase in the foreign-born population in England and Wales was very similar to the increase seen across Western and Southern European ‘EU-14’ countries (Figure 1). 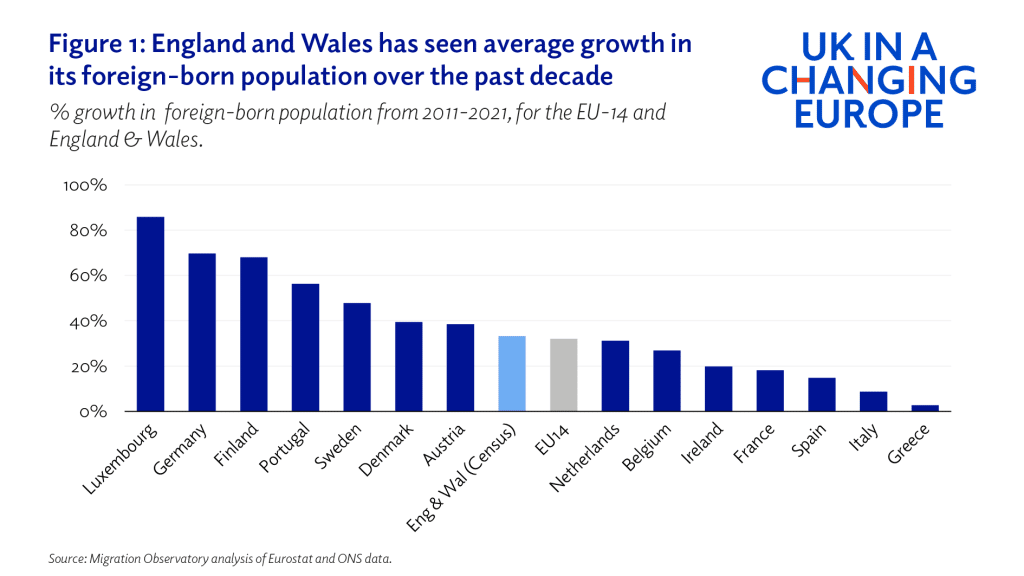 During the 2010s, the pace of migration was a bit slower than in the previous decade. Over the 2000s, the migrant population grew by 2.9 million, rising from 8.9% of the population to 13.4% – an increase of 4.5 percentage points (Figure 2). This growth fell to 3.4 percentage points in the following decade, taking the non-UK born population share to 16.8%. 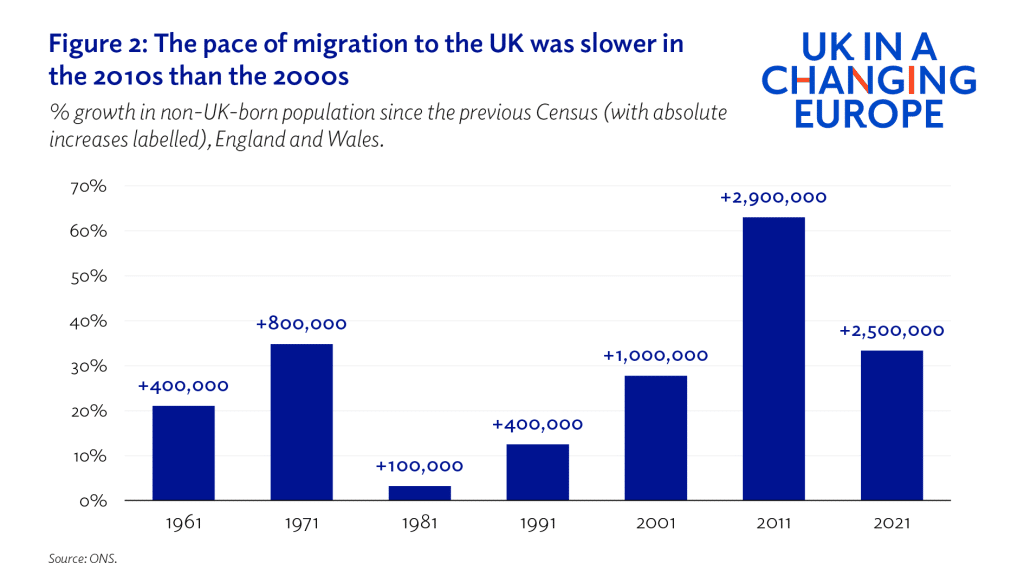 Historically, non-EU migrants made up the large majority of migration to the UK. However, this pattern was less pronounced in the 2010s. The number of non-EU born residents increased by around 1.9m in the 2000s, compared to 1.3m in the 2010s.

Meanwhile, free movement brought substantial numbers of workers from Southern Europe following the euro crisis. Romanians, who had not previously migrated to the UK in large numbers, gained full access to the UK labour market in 2014.

Together, these patterns meant that EU migrants made a larger contribution to net migration in the 2010s than in previous decades, contributing 48% of the 2.5m growth.

The 2021 Census took place less than three months after the end of free movement, when much more restrictive rules for EU citizens had only just come into force.

In some ways, therefore, the Census figures capture the end of an era. Since the Census, the UK has granted surprisingly few visas to EU citizens. EU citizens received only 52,000 visas to live in the UK in year ending June 2022 (only 5% of all visas granted). Many of those EU citizens were work permit recipients, who tend to stay only a few months or years.

Non-EU migration has also risen since the Census was conducted. This largely results from the visa schemes for Ukrainians and Hongkongers, as well as growing numbers of students, and skilled migrants, particularly in the NHS. So by the time the next Census rolls around, we may well have returned to a more familiar past in which non-EU countries are the main driver of growth in the migrant population.

How accurate are the statistics?

For the last few years, migration data nerds have been debating how accurately the UK’s net migration statistics have measured the respective contributions of EU and non-EU migrants. The immigration and emigration figures that comprised the official migration estimates for most of the decade suggested that EU citizens made up only 40% of net migration from April 2011 to March 2020, before the pandemic sharply reduced EU net migration.

New, experimental methods using administrative data put the figure closer to 60%. The Census figures on the net growth in the non-UK born population (which are similar but not precisely comparable net migration estimates, as they are also affected by the number of deaths) put the figure roughly in the middle, at just under half.  There’s still work to do to ascertain exactly why all these estimates differ.

Finally, the Census data can start to resolve uncertainty about the total number of EU citizens in the UK. This rose up the agenda after the EU referendum, when the UK required almost all EU citizens to apply to the EU Settlement Scheme (EUSS) if they wanted to remain in the UK.

The EUSS received a surprisingly high number of applications: about 5.5 million from EU citizens in England and Wales since the scheme opened. After factoring in repeat applications from the same people, that is equivalent to somewhere in the region of 4.9 million individuals.

By contrast, Census figures suggest that by March 2021, only around 3.9 million EU passport holders were still here in England and Wales. That figure falls to just over 3.5 million if you exclude Irish citizens, who are not required to apply to EUSS.

The most likely reason there is such a big difference is that many people who were once in the UK and applied to EUSS were simply no longer here by Census day.

What we do not know is when these EUSS applicants might have left the UK and how long they were here beforehand. Departures at this scale seem just about plausible given that all EU citizens resident in the UK while the scheme was open, no matter how briefly, were eligible.

ONS estimates that around 450,000 long-term residents emigrated in the two years to June 2021 (data for the precise period since the EUSS opened are not available). In addition, short-term trips by EU citizens coming for at least a month averaged 370,000 per year in the two years ending June 2019. Other EUSS applicants may have been visitors on trips of less than a month, who are typically not captured in migration statistics. Not all these people will have applied to EUSS, but their numbers are potentially substantial.

The existence of a population of people with EUSS status outside the UK has implications in itself. Some may already have come back. Others may choose to do so in the future, perhaps in response to labour shortages. Depending on how long they were gone, some will lose their pathway to stay permanently. If the number of EUSS returnees is significant, and if people do not understand the complex rules on absences, this could create some headaches down the line when people apply for permanent status.