What if everyone had voted in the EU referendum?

Britain’s vote to leave the European Union (EU) has prompted a great deal of speculation about whether the outcome really does represent the will of the entire electorate. Citizens and commentators have asserted that the result may well have been different had various groups of potential voters gone to the polls in greater numbers. If only more_____ (fill in your choice of young people, ethnic minorities, Londoners, Scots, university graduates, etc.) had voted, then Remain would have won. At least that’s the argument.

But why restrict this discussion about increased turnout to specific groups? Let’s dare to be democratic—what would have happened if all eligible voters had exercised their franchise by casting a vote in the referendum? Would Britain have voted for Brexit or would the country instead have opted to remain in the EU?

To answer this question, we need to put our ‘nerd hats’ on for a moment and use data gathered in our Essex Continuous Monitoring EU referendum survey. As we already know, at the referendum Leave won 51.89 per cent of the vote and Remain won 48.11 per cent. The Electoral Commission reports that the overall turnout was 72.21 percent. These figures imply that 34.73 per cent of the entire electorate voted to Remain. But what about the people who did not go to the polls?

A question in our post-referendum survey asked those who did not vote how they would have voted had they gone to the polls. It turns out that 39.1 per cent would have voted Remain. Given that the Electoral Commission’s records indicate that 27.79 per cent actually did not turn out, this would have given an additional 10.87 percentage points to Remain (27.79 x .391).

But the story does not end there. Another 32.2 per cent of the respondents in our survey who did not vote said, after the referendum, they ‘did not know’ how they would have voted had they have gone to their local polling station. This amounts to 8.95 per cent of the entire electorate (27.79 x .322). To determine how these people would have voted, we use a question in the pre-referendum survey (conducted on June 19th and 20th—just a few days before the event) which asked them how they were going to vote. Of those who ‘didn’t know’, 53.1 per cent reported after the referendum survey that they opted for Remain.

Using this number to estimate how many of the 8.95 per cent of the electorate would have voted Remain suggests 4.75 per cent (8.95 x .531) would have done so. Now, if we combine these calculations (34.73+10.87+4.75) then we are left with the finding that if everybody had voted at the referendum then 50.35 per cent would have voted Remain, a narrow win but still a different result from that which emerged in reality.

Remainers, however, should not get too excited. This figure is still not conclusive evidence that Remain has majority support across the electorate as a whole. Rather, the 50.35% result is only an estimate of Remain’s strength and one that fails to account for the uncertainty in the survey data which are drawn from a sample of eligible voters. As always, it is important to respect sampling uncertainty in survey data.

To do so, we compute a standard 95 per cent confidence interval or an ‘uncertainty boundary’ which tells us how varied the results would have to be in order to be 95 per cent sure that the actual outcome would be inside the boundary. Our calculations suggest that Remain’s strength in the electorate would have varied from 48.65 per cent to 52.05 per cent. So, even if everyone had gone to the polls Remain could still have lost.

How likely would a Remain loss have been? Although we cannot be certain what would have happened if everyone had voted, we can gain additional insights into the likelihood of a Remain victory. Imagine conducting many (one million!) referendums with a random component distributed about a mean of 50.35 per cent with a standard deviation of 0.85 per cent (a measure of how variable our survey estimates were of Remain’s strength). Assuming a normal or ‘Bell shaped’ distribution for these contests, the one million simulated referendum results are shown in Figure 1. Remain’s total is greater than Leave’s in 66.03 per cent of these contests and, Leave wins 33.97 per cent of them. So, had everyone voted then the odds of a Remain victory would have been substantial but not overwhelming (1.94 to one). 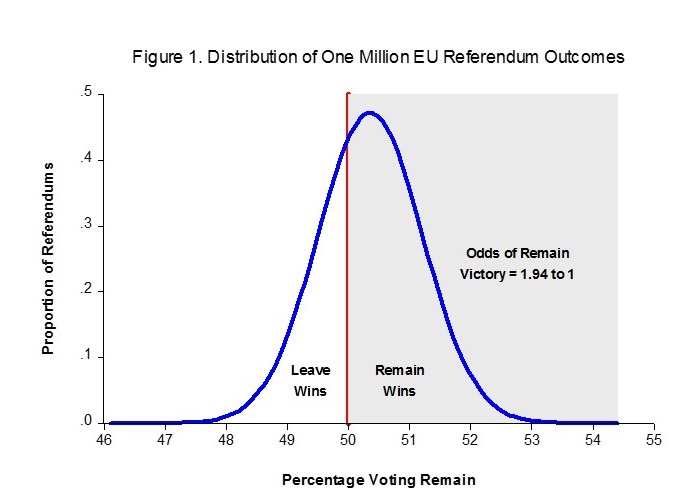 Of course, UK voters did not have one million chances to vote to stay in the EU.  They had one, and a majority of those who cast a ballot opted to leave.  While Brexit likely does not reflect the sentiment of the entire electorate the result of the referendum reflects how democracy works. This is a longstanding constitutional principle and it was honored on June 23rd.  If you don’t participate, your voice is not heard.

This discussion of what ‘might have been’ has led some disappointed Remainers (and political movements) to demand a second EU referendum. Some MPs have called for Parliament to exert its constitutional power and reject the result entirely. Still others have suggested that Prime Minister May and her Government should ‘slow walk’ exit negotiations with the EU, by failing to invoke Article 50 of the Lisbon Treaty and so subvert the Brexit decision with bureaucratic inertia. The success of these efforts remains to be seen and their democratic bona fides are sure to be challenged.

Written by Harold Clarke, School of Economic, Political and Policy Sciences University of Texas at Dallas. Professor Matthew Goodwin, senior fellow UK in a Changing Europe and Paul Whiteley, Department of Government University of Essex. This piece was co published with The Conversation.

Related Analysis: Professor Richard Rose on the difference between a referendum and a plebiscite

For another piece by these authors, try their analysis on why they believe Britain voted to leave the EU. If you’re interested in turnout and voting age, read this pre-referendum piece on the potential impacts of lowering voting age to 16.