What MPs think about Brexit

When Theresa May called a snap general election in April 2017, the Prime Minister argued that it was not the state of public opinion but rather opinion among MPs, and continued opposition to Brexit within Parliament, that had forced her hand.

The election outcome did not produce the arithmetic in the House of Commons that the Conservative Party had expected. But it has proven Theresa May right in one key respect: implementing Brexit, and the policy choices involved in the government’s interpretation of the referendum, was always going to be problematic without an enhanced majority.

With no majority at all, the problems for the government are compounded.

At the UK in a Changing Europe and the Mile End Institute, we have been tracking MPs’ attitudes to Brexit for three years. Working with Ipsos Mori’s Reputation Centre, we surveyed around 100 MPs in the winters of 2015, 2016, and 2017 – with a further round planned for 2018. This gives us an understanding of where MPs in the parties stand today and how attitudes have changed over time.

This is not just a matter of party size.

Both Labour and the Conservatives are fundamentally divided in Parliament over key aspects of how the UK’s relationship with the EU should be reshaped. On many of the issues relating to the Brexit negotiations, these divisions are primarily between the front and backbenches of both parties – although in the Conservatives, at least, there are also some significant differences on the backbenches as well.

The problems for the government are clear. Whilst there is majority support for the idea of a transition arrangement between the UK and the EU (73% of Conservative MPs surveyed in Winter 2017 supported this), there is not much flexibility on its length: of those that supported the idea, 75% wanted it to last no more than two years, and just 12% thought it should last as long as needed.

Perhaps more importantly, Conservative MPs appear set against the idea that any transition arrangements should involve either continuing freedom of movement for EU citizens, or a continuing role for the European Court of Justice.

As Figure 1 shows, 74% of Conservative MPs surveyed oppose the UK accepting that freedom of movement will continue uninhibited, and 63% say they do not want any role for the ECJ after March 2019. Theresa May has signalled that she could be willing to concede to the EU on both these points.

Given that the terms of transition are likely to be one of the key issues determined when Parliament gets the ‘meaningful vote’ it is promised at the end of 2018, this difference between the Prime Minister’s position and her party could become increasingly difficult to sustain. 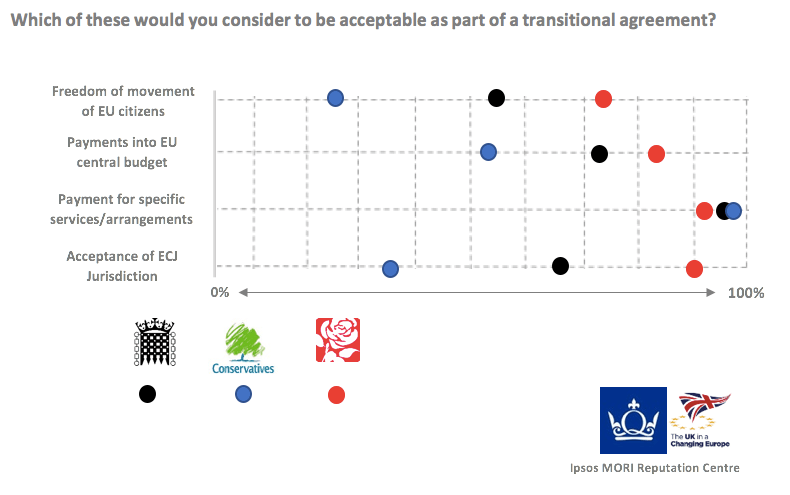 However, there are also positives for Theresa May from this survey. She has clearly been successful in taking the Conservative Party with her on the preferred end state of UK-EU relations.

When asked in the winter of 2016, prior to May’s Florence Speech ruling out UK membership of the single market and the customs union, half of Conservative MPs felt single market membership could be compatible with leaving the EU. That figure is now down to 23%, suggesting a significant shift in view within the Parliamentary Conservative Party.

Research by Tim Bale, Monica Poletti and Paul Webb shows that 69% of Conservative members are against remaining in the single market. On this, at least, the Prime Minister, the bulk of her MPs, and her members are on the same page.

A further political success for May is that Conservative MPs also appear to have bought into the idea that ‘no deal is better than a bad deal’: 78% say they agree with this, while only 18% believe that no deal is the worst of all outcomes.

The key tension within the Parliamentary Labour Party is rather different. In contrast to their party leadership, 90% of Labour MPs feel that membership of the single market is both possible outside the EU and compatible with honouring the referendum.

When set against the option of an alternative hypothetical trade deal, one that replicates as many of the benefits of current EU trade as possible, 56% of Labour MPs still favoured remaining in the single market.

Belief in the viability of the single market as a Brexit end-state has not significantly shifted among Labour MPs in the last twelve months, despite Jeremy Corbyn’s continuing opposition.

You see these same divisions when MPs are asked what form of government would make their preferred Brexit outcome most likely: just 38% of Labour MPs believe a large Labour majority is the sort of government that would produce their optimal Brexit outcome. 33% go for a slim Labour majority, and 23% think a hung Parliament would produce the political conditions that would lead to their preferred outcome.

The balance of cross-party opinion has so far sustained significant majorities for the triggering of Article 50. The government’s defeat during the passage of the EU Withdrawal Bill in December created a requirement for a future ‘meaningful vote’ in Parliament on Theresa May’s Brexit deal, and ensured that 2017 ended with a clear symbolic assertion of the power of Parliament.

If 2018 is not to end with a similar pushback against the government, then the parliamentary arithmetic means May will be reliant on maintaining support from across Parliament.

By Philip Cowley, Professor of Politics at Queen Mary, University of London; and Alan Wager, Research Associate at the UK in a Changing Europe.