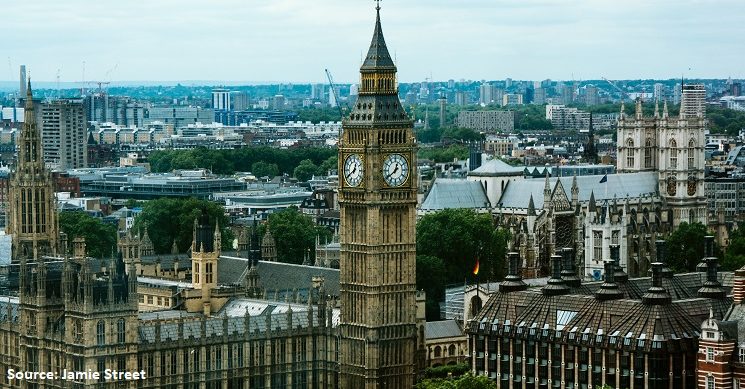 Anyone wanting to understand post-Brexit Britain and its Brexit divides should make a beeline for a report published towards the end of last year by the Policy Institute at King’s College London. It draws a crucial distinction between two modern phenomena.

On one hand there is affective polarisation – described in the report as “when individuals begin to segregate themselves socially and to distrust and dislike people from the opposing side, irrespective of whether they disagree on matters of policy”.

On the other is issue polarisation – “the difference in values and attitudes on one or more issues”.

After sifting the survey evidence, the report’s authors find that “people on both sides of the Brexit vote dislike the opposing side intensely even though they don’t necessarily disagree with their positions on salient issues”.

In other words, while there’s plenty of evidence of affective polarisation, there’s much less for issue polarisation.

This provides at least a degree of comfort for those of us who hope the UK can somehow move on from the deeply divisive politics of the past four years.

That’s not to say, of course, that moving on will be easy. And it will, in part, depend on how the nation’s politicos respond in the coming years.

As the Policy Institute’s report notes: “voters to some extent take cues from party platforms and leaders, so polarisation among political leaders and activists can spread to the electorate.”

And that’s what makes the views of Britain’s rank-and-file party members important. While they don’t necessarily directly determine the tone and the direction their parties take, they do have an indirect and sometimes pretty immediate influence on them.

Witness, for example, how the slow growth of hard euroscepticism within the Conservative party eventually went on to have such dramatic consequences for the nation.

Don’t forget either that members also constitute the on-the-ground sales force for their parties. Because they interact on the doorstep with the public as well as with politicians, what they think, say and do about the UK’s relationship with the European Union really can matter.

That’s especially the case as the nation decides what it wants its future relationship with Europe to look like.

Even partisans agree on some things

Over Christmas and the New Year, the Party Members Project, run out of Queen Mary University of London and Sussex University, asked the members of the Conservative, Labour, Liberal Democrat, Scottish Nationalist and Green parties (plus registered supporters of the Brexit Party) a couple of key questions about the UK/EU relationship.

The first touches on what, if you like, is the broad-brush future relationship between the UK and the EU. It shows a high degree of polarisation – and perhaps affective polarisation – between what are effectively two tribes, as the chart below shows. 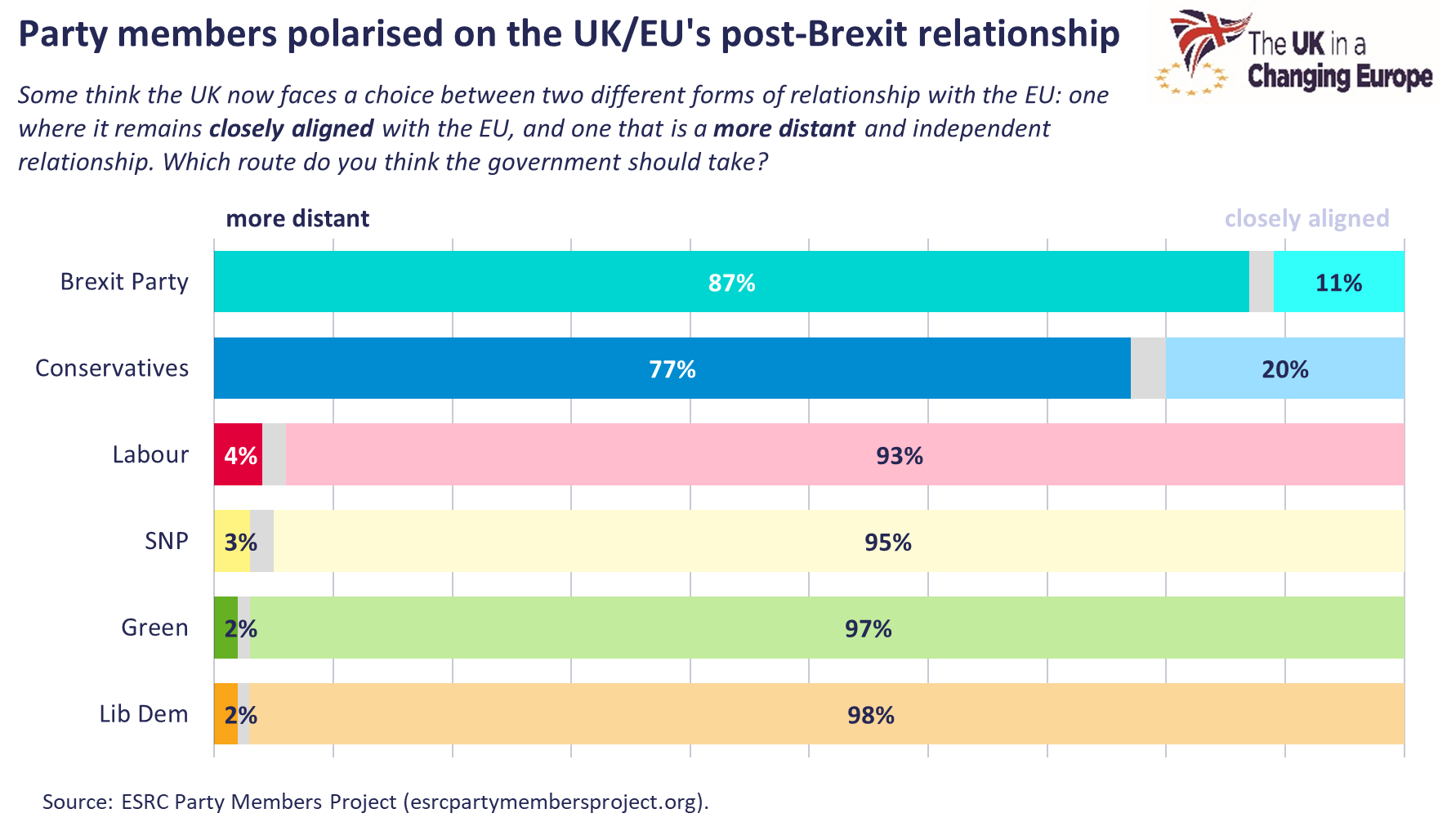 On one side of the divide, Tory members and Brexit Party registered supporters are both overwhelmingly in favour of a more distant relationship.

On the other, you have those who belong to Labour, the Lib Dems, the SNP and the Greens. They are even more overwhelmingly in favour of close alignment between the UK and the EU.

This would suggest that the country isn’t about to heal its Brexit divisions any time soon. But before we descend into total despair, it’s worth turning to the second question we asked.

That’s because it’s a reminder that people – even highly partisan people – become less polarised when you ask them about specifics.

That’s even true for immigration – often a subject that plays into the ‘culture wars’ narrative.

We asked whether European nationals should be treated differently from people from elsewhere in the world when it comes to post-Brexit immigration. 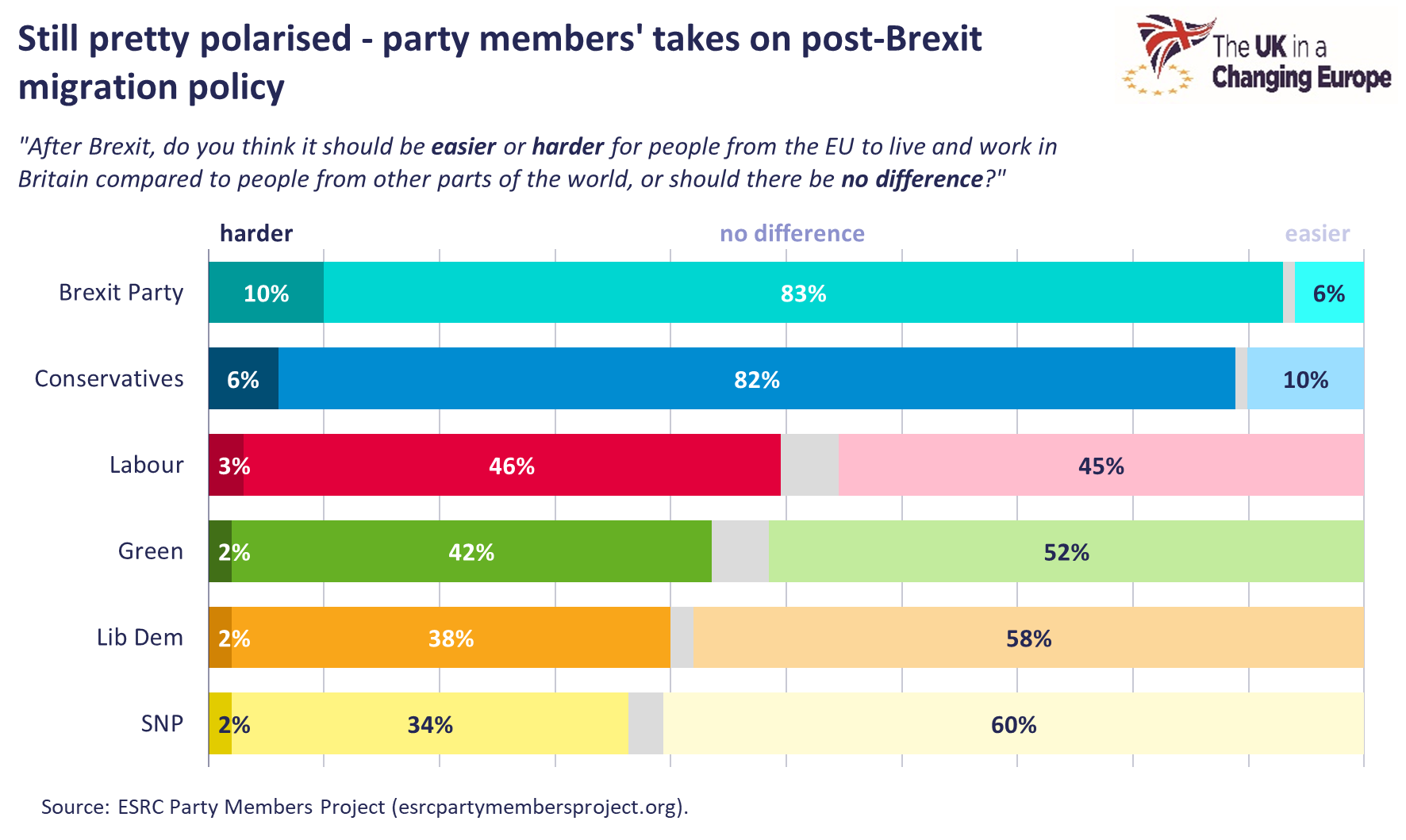 While the two tribes are still pretty divided, there is far more overlap between parties on this second question than on the first one.

Many members from the left-liberal parties are actually in agreement with Conservatives and Brexit Party supporters in wanting everyone to be treated the same. They might be said to come at the question from different viewpoints, but they still find some common ground, at least.

These findings at least give us a hint at how the UK might go about trying to heal divisions.

Instead of focusing on Brexit identities and the big picture, it may be that people should move as soon as possible to talking about the myriad specifics that need sorting out.

Now the UK has left the EU, the nation can best create a wider consensus on how to move forward by building on the fact that there’s much less that separates people on individual issues than separates them emotionally.

By Tim Bale, deputy director of the UK in a Changing Europe, and Paul Webb, professor of politics at the University of Sussex.