Public attitudes to Russia and the UK’s allies 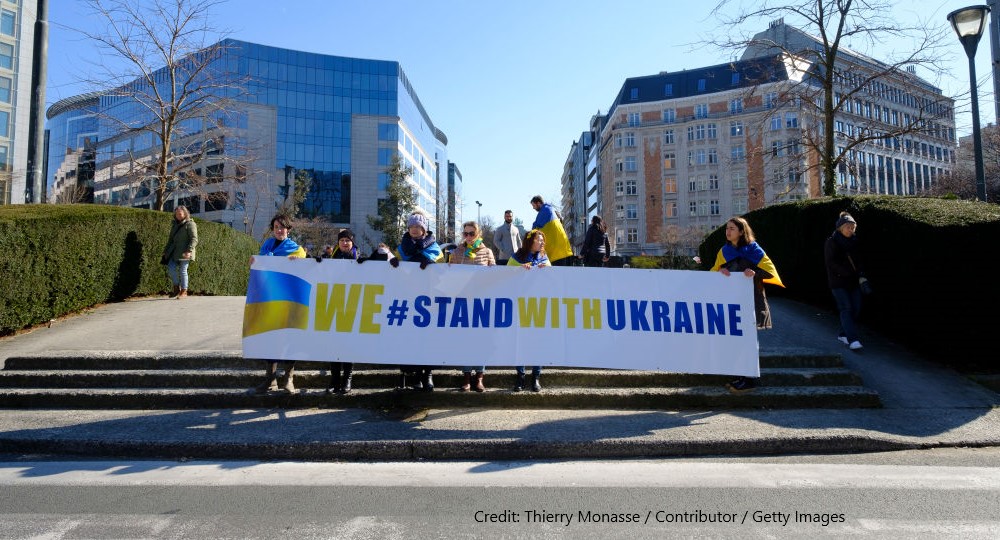 The crisis unfolding in Ukraine is fast moving, and casting a spotlight on the UK government’s foreign policy. On Friday, Liz Truss attended a meeting of EU foreign ministers – the first time this has happened since Brexit. That this was alongside the US Secretary of State is testimony to the striking unity of the West’s response.

This unity is also reflected domestically. Both major political parties are (largely) on the same page. As for public opinion, on 20 February, as Russia was on the cusp of invasion, with Redfield and Wilton Strategies we polled people in the UK – as part of our regular Brexit tracker – on attitudes to foreign affairs, including relations with, and attitudes to, Russia. It allows us to understand how the UK’s position outside the EU shapes attitudes to foreign affairs, as well as the low ebb attitudes to Russia had already reached three days prior to the invasion.

Our tracker asks the public how favourably or unfavourably they view a range of 35 countries (and the EU). There is plenty to unpack in the data: the broadly positive perception of the CANZUK countries (Australia, Canada and New Zealand); France and Hungary as the two members viewed less favourably than the EU as a whole; and ambivalence towards Ukraine (due to some 47% saying they were ‘neither favourable nor unfavourable, a finding that will surely change when we next conduct the survey).

Yet most striking is that, even prior to Putin’s invasion, UK public attitudes to Russia were less favourable than they were about any other country we asked about. 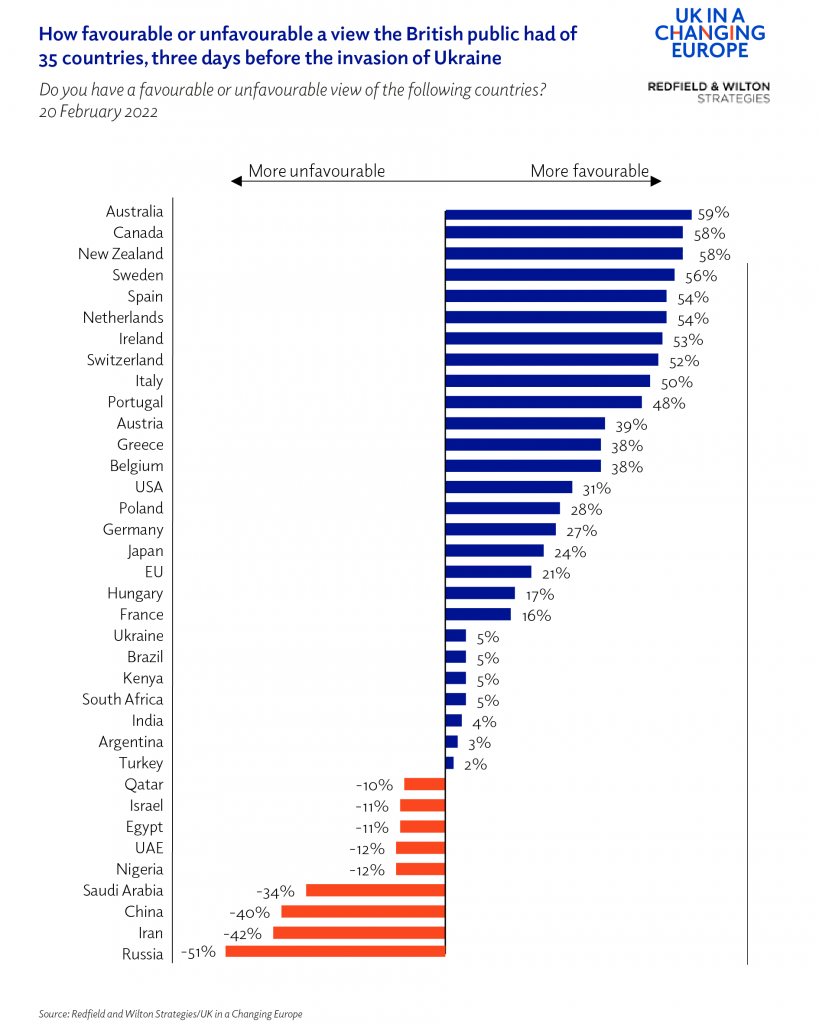 In part, this may have been driven by the drumbeat of Russian aggression leading up the invasion (when we asked in November the net favourability figure towards Russia was -42). Yet it may also be related to more deeply seated attitudes. When comparing across generations, there is a clear age divide: while 77 per cent of those over 65 said they held an unfavourable view of Russia, the same was true of just 45 per cent of those 18-24. 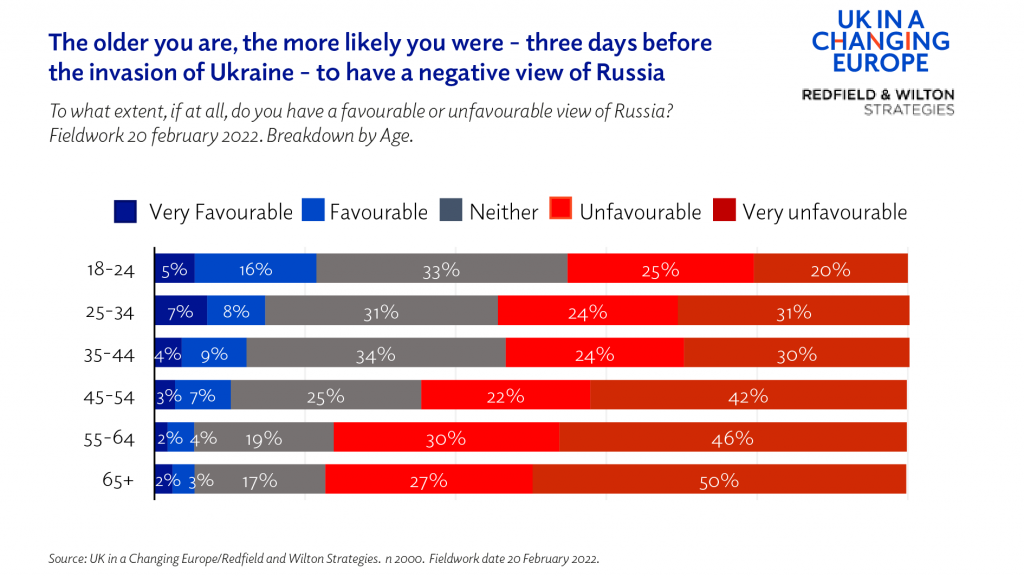 If a stand-off between Russia and the west seems like a new reality for some of us, for others with memories of the Cold War and who were already likely to view Russia with scepticism, the present crisis may seem all too familiar.

This of course does not give any clues as to what the UK’s strategy should be to deal with the threat that Russia poses. The integrated review, published this time last year, contained only one reference to UK-EU security co-operation, prioritising bilateral relationships with member states and – more clearly –strengthening the Anglo-American relationship. Certainly, it was a document more warmly received in Washington than Brussels.

This looks to roughly accord with the public’s priorities. When asked whether it is more important to align with either the US or the EU on Russia the UK public is split: 40 per cent think the US relationship is more important, 37 per cent say the EU. At present this is a false choice. 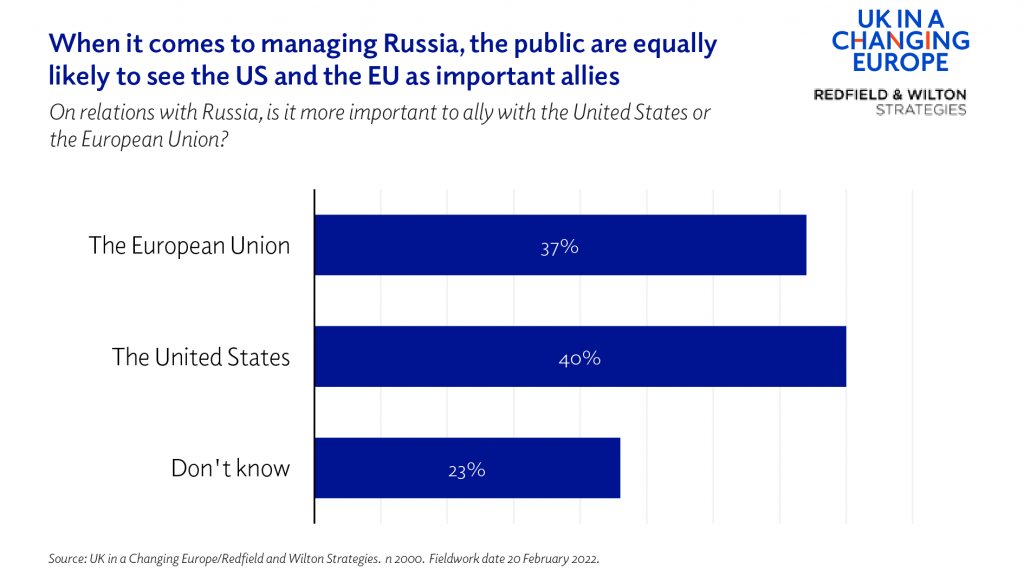 If cracks in the west’s response do begin to appear then the UK’s independent position, outside the EU but closely aligned to it, looks at first blush to be where the public are too.

Looking under the hood of this finding, however, there are clear differences by party – Labour voters being more likely to say the EU relationship is more important, and Conservative voters the opposite. Clearly, there is a divide within British politics about where the UK’s key partnership lie, the equivalent numbers for those who voted leave are 50% favouring the US relationship and for Remainers 51% saying the EU is more important. 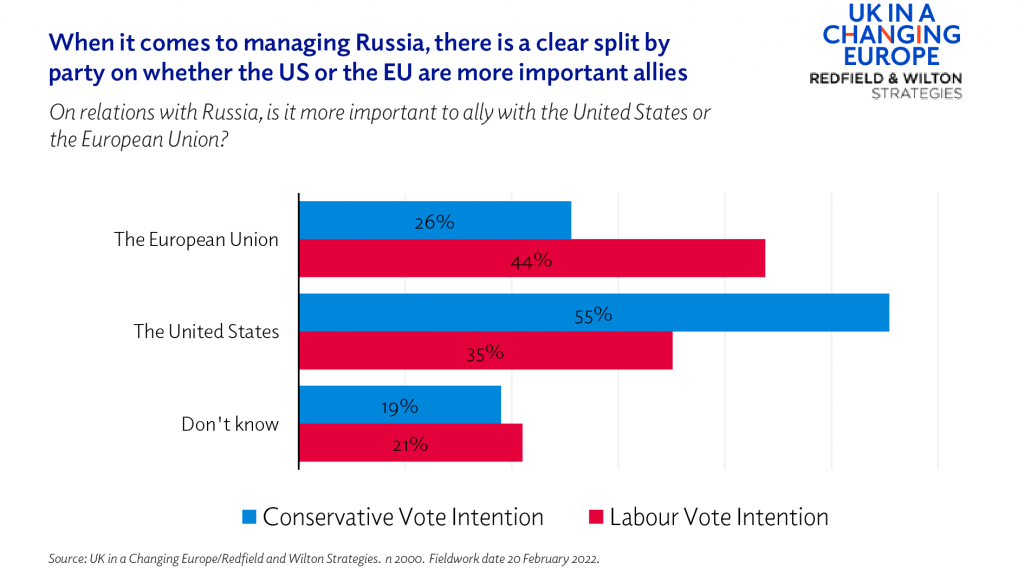 Given the relatively proactive response from the EU – particularly the transformed defence posture of Germany, and the role Macron is playing as a key intermediary –  it will be worth watching whether these divisions in public opinion, partly an artefact of the Brexit vote, persist as the war unfolds and the UK-EU relationship potentially moves to a new phase (think of the Foreign Secretary at the EU meeting last week).

To date both the west, and political parties within the UK, have maintained an impressive display of unity in the face of events in Ukraine. That Russia is the aggressor and a threat seems baked into public opinion, just as it was a key argument of the recent Integrated Review. As to how the UK should respond, and, more specifically, with whom, the Brexit divide is still very much in evidence.

As it stands, the UK’s current position in the world is not that far from where the voters wish it to be. Certainly the lack of formal networks of collaboration with the EU reflects what Conservative voters see as the UK’s key strategic relationships.

What will be interesting to track will be whether, if differences in Western approaches to Russia do emerge, and particularly if the EU continues to act more effectively than many initially expected to, the public mood becomes more supportive of collaboration with European states and particularly with the EU itself. If so, this could mark a real break from the Brexit era.