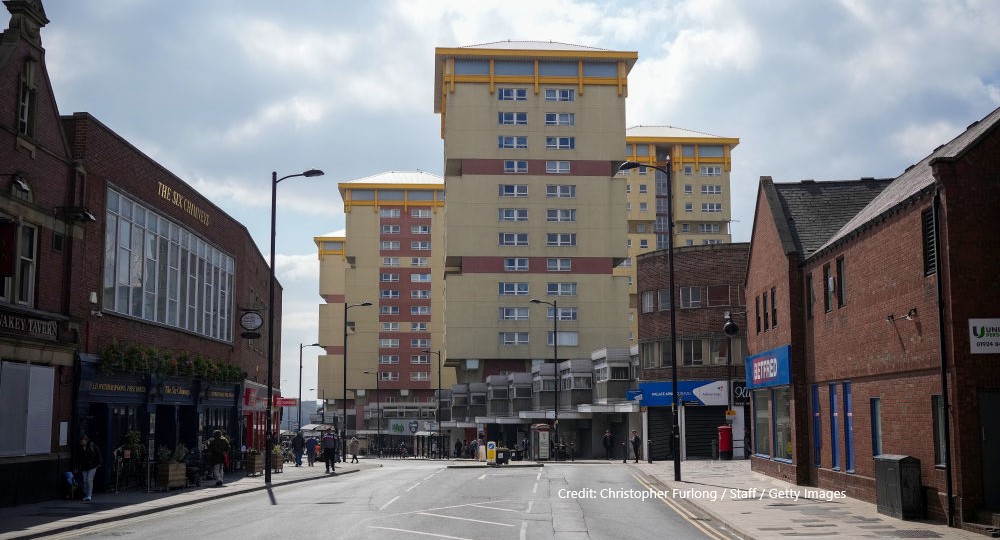 Wakefield is the centre of national attention. That sentence itself bears eloquent testimony to the way politics has changed since the referendum of 2016. But while Wakefield might, for the moment, attract our interest, it is far less clear what that interest might mean for the city itself.

We at UK in a Changing Europe, in association with YouGov, have carried out a survey looking at people’s attitudes towards the places they live. We asked about the government and political institutions in general, and towards the notion of levelling up. The full results will be out next month, but we thought it was worth having a quick look at what the findings tell us about red wall seats, attitudes to national politics and government policies, and Wakefield in particular.

Levelling up is a popular idea and hence a hugely effective political slogan. Over 75 per cent of those asked supported spending government money on the Levelling Up Fund, including a majority of those questioned in Wakefield.

But there’s supporting levelling up and there’s knowing what it means or should mean. The government has, despite much rhetoric to the contrary, adopted a highly centralised approach, with much focus on national, “glamour” projects such as HS2.

Yet when you ask people what they think levelling-up funds should be spent on, and who should spend them, their priorities are strikingly local. Indeed, what people feel about their local area varies significantly according to where they live. Respondents from Wakefield — admittedly, a small sample — feel that opportunities for young people and the quality of housing are below average for England. In contrast, they think the cost, quality and availability of transport is either average, or better than average. Other people in other places see things differently.

Levelling up and inequality are viewed not in terms of national, but local comparisons. Certainly, a large proportion of respondents (66 per cent) feel the North receives less than what they see as its “fair share” of funding from government. More than 60 per cent believe London receives far more. However, focus groups carried out by our colleagues at the Policy Institute, King’s College London, reveal that when discussing levelling up, people are much more likely to compare their local area with nearby towns and cities than to London.

Inequalities within regions tend to be larger than those between them. Within West Yorkshire, there are large economic disparities between former mining communities such as Kirklees, and a university city such as Leeds. In 2019-20, Leeds was the only area in the region where economic growth was above the national average. Intra-regional inequalities mean that levelling up will be a much more complex issue than simply narrowing the north-south divide, particularly since the public themselves tend to view the issue from a much more local perspective.

Also striking was the lack of faith in the ability of either central government, or of politicians in general, to do anything about the manifest inequalities that respondents identified. Over 45 per cent believe that the government in Westminster does not care about their local area. The percentage was similar when asked about their local MP. In addition there was a significant lack of trust in political institutions, with nearly 60 per cent of respondents stating they have no trust at all in the two main parties in Westminster. A large majority of our Wakefield sub-sample were equally adamant about their lack of trust in the government, their MP, or either of the two main political parties, and their belief that none really cared about their area.

This is unlikely to change given the circumstances of this by-election, coming as it does on top of various scandals concerning rule-breaking, sleaze and candidate selection. Yet one positive takeaway is that those surveyed nationwide, and in Wakefield, had somewhat more charitable views of local councillors and mayors, seeing them as more trustworthy and more likely to care about their local area. All of which reinforces the need for a local approach to decision making and allocation processes.

Finally, and crucially, there’s the question of how people view their regions. Whatever the dissatisfaction with the status quo, residents are resolutely proud of where they live. Over 55 per cent of those surveyed said they were “quite proud” to live where they do. Across the red wall constituencies, the words most often used by people to describe where they live have positive connotations: “friendly”, “quiet”, “pleasant” and “community” are among the most popular. The majority of our Wakefield sample similarly describe themselves as “proud” or “quite proud” of their area, and a majority also say they would like to continue living there.

And so, while unlikely to be convinced by boosterish rhetoric, inhabitants are likely to be equally unimpressed by unmitigated negativity about “left behind” (itself an offensive term) places. Of course, they understand that they do not receive as much as other places in terms of investment. Nevertheless, they value the place they live, and want the best for it.

The Wakefield by-election might be a national event, but our findings show that a local approach to levelling up is key. This means the involvement of local communities and local government in the allocation of funds, a shift away from Westminster, positive messaging, and the implementation of tailored programmes to fit the needs of regions.