What would the European Parliament look like after Brexit? 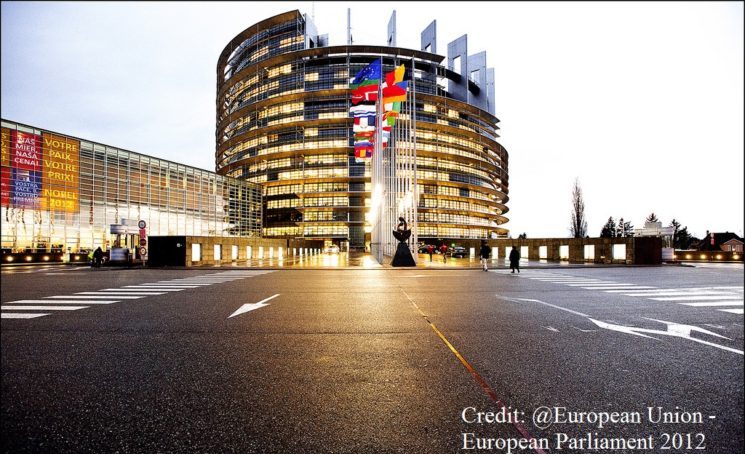 If the UK left the EU, in all likelihood we would still have to apply many of the EU market’s rules and regulations. If the UK remained a member of the European Economic Area, like Norway, all EU single market rules would still apply in the UK. On the other hand, if we left the single market and negotiated a free trade agreement with the EU – which perhaps seems the most likely scenario – firms exporting to the EU market would have to apply all EU goods and services standards to be able to gain access.

An issue that is relevant to the UK debate, then, is how would the rules of the EU’s single market change if we left? One way of looking at this is to consider the political make-up of the European Parliament, as this institution now has equal power with the governments in the Council to set the rules for the single market.

The European Parliament after Brexit

British MEPs currently sit in several political groups: 22 UKIP MEPs sit in the eurosceptic Europe of Freedom and Direct Democracy (EFDD) group; 1 Ulster Unionist Party MEP and 20 Conservative MEPs sit in the European Conservatives and Reformists (ECR) group; 20 Labour MEPs sit with the Socialists and Democrats (S&D) group; 6 British MEPs (from the Greens, Scottish Nationalists, and Plaid Cymru) are in the Greens/European Free Alliance (G/EFA); 1 Lib Dem MEP is in the Alliance of Liberals and Democrats for Europe (ALDE); 1 Sinn Fein MEP is in the European United Left/Nordic Green Left (EUL/NGL); 1 independent MEP sits in the radical right Europe of Nations and Freedom (ENF) group; and 1 Democratic Unionist Party MEP is not attached to any group.

Figure 1 shows the current size of the political groups and what the chamber would look like without these 73 British MEPs. As the figure shows, the balance between the groups on the left and right would not change much as the locations of the lines between the Greens (G/EFA) and the Liberals (ALDE) or between the Liberals and the centre-right European People’s Party (EPP) would hardly move.

Figure 1. Make-up of the European Parliament with and without British MEPs 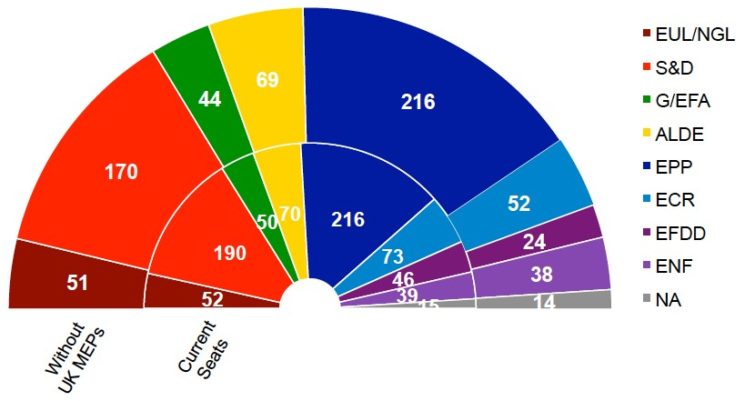 However, looking at the coalitions that usually form in votes in the European Parliament, in Figure 2, suggests that there would be some significant changes to the balance of power in the chamber.

Figure 2. Coalitions with and without British MEPs 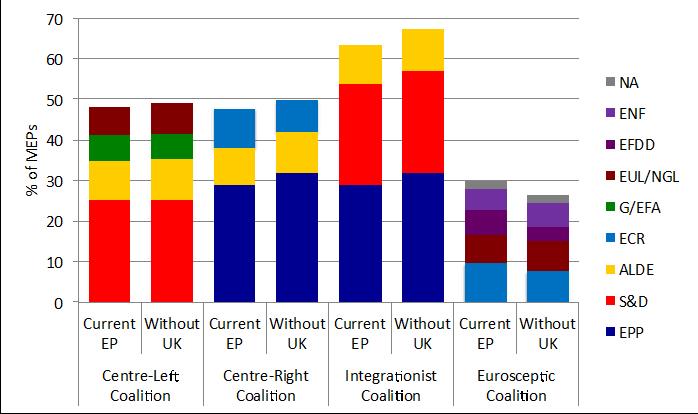 Perhaps more significantly, the ‘integrationist coalition’ between the three pro-EU centrist groups – the centre-right EPP, the centre-left S&D, and the centrist ALDE – would be even more dominant than it is currently. And against this bloc, the ‘Eurosceptic coalition’ would be considerably weaker without the Brits.

What would these changes mean for EU policies?

The stronger integrationist coalition at the expense of Eurosceptic MEPs would mean that the bloc of MEPs in the European Parliament in favour of deeper economic, political, and social integration would be more powerful. For example, there would be a bigger majority in support of deeper economic and monetary union (such as eurozone bonds and harmonised macro-economic policies). In addition, given that the EPP and S&D both favour a ‘social market’ model for the single market, there would be a larger majority in support of common social policies (such as the Working Time Directive), more tax harmonisation, and perhaps even a European minimum wage.

These inferences might seem a little far-fetched, but they are also supported by a recent report by VoteWatch, a group which tracks voting in the European Parliament. VoteWatch looked at the outcome of recent votes on key issues and how they would have been different had the British MEPs not been present. This analysis led VoteWatch to highlight 5 areas where policy outcomes would most likely change after Brexit: (1) a higher regulatory burden for businesses, with more social regulations in particular; (2) weaker copyright protection; (3) a larger EU budget (as a proportion of EU GDP); (4) harmonisation of corporation taxes as well as a more regulation of financial services (such as a financial transactions tax); and (5) less support for nuclear energy and shale gas exploitation.

In short, the policies applied in the EU single market could be very different without the UK. Without the British MEPs, there would be a larger majority in support of deeper economic and political integration, as well as larger majorities in favour of higher social and environmental regulation and common EU taxes.

Some people, particularly on the left, might like to see this, as the EU would most likely be less ‘neo-liberal’ and more ‘social democratic’ without Britain. However, from the perspective of the UK outside the EU, the European single market – which would continue to be the UK’s largest export market – would be more highly regulated, and this would inevitably mean significantly higher costs for UK firms who would still want to continue to sell their goods and services to the EU.