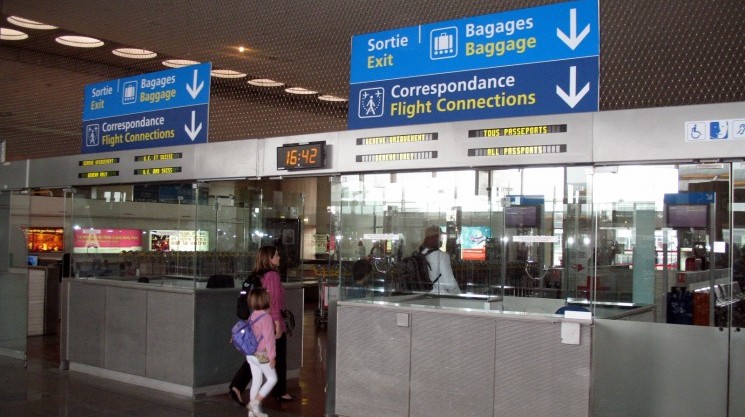 Last  month’s immigration statistics showed net migration to the UK rising to 330,000 last year, a record – and far in excess of the government’s “aspiration” (downgraded from a “target”) to reduce migration to the tens of thousands.

Net migration from within the EU, at 183,000, has been largely responsible for the recent rise. Substantial net migration from within the EU to the UK is is a recent development. Free movement was one of the founding principles of the EU, but only in the last decade – when central and eastern European countries joined the Union in 2004 – has it become of major economic and social significance.

While non-EU migrants still outnumber those of EU origin within the resident population, an increasing proportion of new arrivals (especially those coming to work rather than study) is from elsewhere in Europe.”

Not surprisingly, then, politicians who favour “Brexit” say that only leaving the EU would enable the UK to restore “control over our borders” and reduce migration. Ukip, for example, say that after leaving the EU they would introduce an “Australian-style points system” – an “ethical visa system for work and study, based on the principle of equal application to all people”.

The question of what EU exit could or should mean for immigration to the UK will be central to the referendum campaign.

The first point to note is that leaving the EU does not necessarily mean ending free movement, and hence large-scale, “uncontrolled” migration from elsewhere in the EU.

If we wanted to preserve access to the EU single market – as many of those who favour exit say they want – then the most obvious way to do so would be for us to join Norway (and Iceland and Liechtenstein) as members of the European Economic Area. But free movement actually applies to EEA members on pretty much the same basis.

Alternatively, we could emulate Switzerland, and negotiate bilateral agreements for market access. But not only do the Swiss have far more EU migrants than us, when they recently voted in a referendum to impose quotas, the EU told them bluntly that that wasn’t acceptable. Faced with the prospect of being (effectively) kicked out of the single market, the Swiss are thinking again.

So to genuinely go it alone on immigration policy might well require not just Brexit but an acceptance that we would be excluding ourselves from the single market. And even then we would almost certainly have to negotiate some bilateral arrangements with EU countries – if only to safeguard the position of the large numbers of EU nationals already here (we’re hardly going to deport them) and UK citizens in other European countries (repatriating large numbers of pensioners from Spain is equally impracticable).

But, supposing this could be achieved relatively painlessly, what would our new immigration policy look like?  Ukip’s talk of an “Australian-style points system” begs more questions than it answers. In fact, as far back as 2008, the then government claimed that this was exactly what it was introducing. As Randall Hansen points out elsewhere on this site, the countries with fully-fledged points systems (Canada and Australia) introduced them as a way of targeting growth in both overall population and human capital; higher immigration is not necessarily the objective of those who want us to leave the EU.

That said, there is no doubt that, if we were no longer part of the EU free movement area, a sensible immigration policy would look quite different to current policy.  There would be no rationale for, as we do now, offering completely free access to the UK labour market for workers, skilled or otherwise, from Bulgaria or Belgium, while imposing tight restrictions on even highly skilled workers with a job offer or scarce skills from India or Indonesia.

First, would the new system be more generous to non-EU migrants than the current one? That is indeed what some opponents of free movement imply – for example Migration Watch here, saying fewer Europeans would “make room” for Syrian refugees, or Ukip here, making rules “fairer for the Commonwealth”.  But this seems disingenuous at best.

So either the new system will have to be just as restrictive towards Syrian refugees or Commonwealth doctors as the current one, or net migration will still remain at historically very high levels – not as high as at present, but still well above the government’s target. And now there would no longer be a convenient excuse for not hitting it.

Second, would we really ban unskilled migration for economic reasons entirely? At least in theory, it is possible to make a plausible economic rationale for doing so; while this would cut growth in the short term, it might over time incentivise firms into productivity-enhancing investment or training.

But these effects are lengthy and uncertain (and not obvious in previous periods of low migration). Meanwhile, business would suffer and would be vocal in saying so. And the incentives for irregular migration would increase significantly (remember that the vast majority of irregular migrants come to the UK perfectly legally and stay on – it is not primarily a question of border control).

Third, would a new system actually be an improvement on the current one, in terms of economic outcomes?  Although our system is far from perfect or optimal in an economic sense, all the evidence suggests it has delivered surprisingly positive outcomes over the last two decades.

There is little or no evidence of negative impacts on jobs or average wages, and only small wage impacts even for low-skilled workers; productivity impacts are likely to have been positive; and, perhaps most surprisingly, despite the fact that most immigrants are not selected by skill, the UK does remarkably well in attracting skilled migrants. As this chart shows, immigrants to the UK are considerably more likely to be highly educated than either natives or migrants to other countries.

Chart title: Proportion of natives and migrants with tertiary education 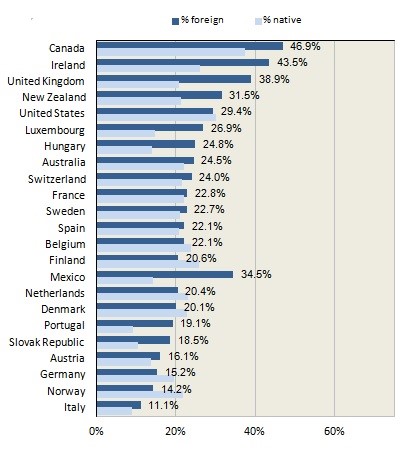 By UK in a Changing Europe senior fellow Jonathan Portes