What’s the role of experts in the public debate? 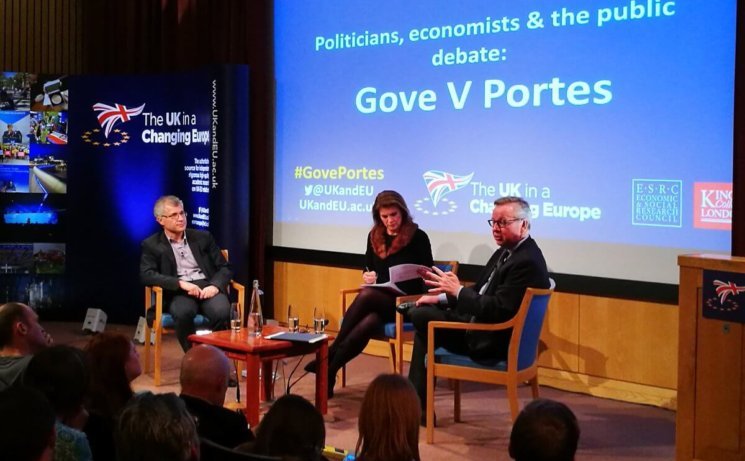 What’s the role of experts in the public debate?  And how should the media (and politicians) use them?  I’m assuming we’re talking here primarily about economists and other social scientists, not physicists or biotechnologists – although they shouldn’t assume they’re immune either, as some of the debates around climate change or vaccines show..

I think we have three really important functions.

First, to explain our basic concepts and most important insights in plain English. Famously, Paul Samuelson, the founder of modern macroeconomics, was asked whether economics told us anything that was true but not obvious.  It took him a couple of years, but eventually he gave an excellent and topical example – simply the theory of comparative advantage.

Similarly, I often say that the most useful thing I did in my 6 years as Chief Economist  at DWP was to explain the lump of labour fallacy – that there isn’t a fixed number of jobs in the economy, and increased immigration or more women working adds to both labour demand and labour supply – to six successive Secretaries of State. So that’s the first.

Second is to call bullshit.  Recently, Change Britain supposedly a “thinktank backed by Michael Gove” claimed that leaving the customs union – and concluding new free trade deals with countries ranging from India to Korea – could “create 400,000 new jobs”, because of the projected increase in UK exports.

Michael was quoted in the Telegraph as saying that the report showed how new trade deals would create hundreds of thousands of jobs. Leaving aside the realism of this, let’s just look at the logic. Change Britain took some estimates from the European Commission of the potential boost to both exports and imports from trade deals. They translated the increased exports into extra jobs. They forgot to translate the increased imports into fewer jobs.

Third, perhaps most difficult and where the element of judgement comes in, is in synthesising the consensus of other experts on a difficult topic, where there may not be one right answer, on topics from the minimum wage to the pros and cons of grammar schools, putting it in context, and explaining why it does, or doesn’t, matter.  And this is perhaps where politicians and the public need us most.

I’m going to give a specific example because I think it’s a very helpful illustration of what experts are good for at the same time as illustrating why the public, often rightly, don’t trust politicians quoting experts..

The text for today’s debate is Michael Gove’s famous interview with Faisal Islam. I know Michael insists that he’s been taken out of context, so I’ll give the quote in full

“I think the people of this country have had enough of experts with organisations with acronyms saying that they know what is best and getting it consistently wrong.”

Just 3 weeks before the referendum, Boris Johnson and Michael Gove, in a joint statement, said:

“The Bank of England has said that a ten per cent rise in the proportion of new people coming here is associated with a two per cent cut in pay for working people”.

The Bank of England was precisely one of the organisations with acronyms that Faisal Islam had cited and that Michael was ridiculing.

But it’s much worse than that.  Michael’s statement was correct that the Bank had published a study – by genuine experts on labour markets – on the impact of migration and wages. But his interpretation of that study was from the Daily Express, not from actual experts.

Had he wanted to get it right, he would have asked an expert. Or, indeed, he could have read my blog, also written up by Ben Chu in the Independent, which explained why the interpretation he gave was wrong. In fact, the actual impact on the wages of low paid British workers was about 1 percent. And, crucially, that wasn’t from “ten percent rise in the proportion of new people coming here “. It was over the entire period of very high immigration since about 2002.  About 0.1% a year in other words. Quite a different story.

Nor does Michael have to take my word for this. He can just ask Steve Nickell, one of the UK’s foremost economists. And also as it happens one of the authors of the study in question. Interviewed recently, he described the impact that his paper found as “infinitesimally small” and expressed his regret that he couldn’t complain during the campaign about the way his paper was being distorted by people like Michael.

I should make clear here I’m not claiming that it’s illegitimate for people who, like Michael, want to end free movement to claim that it’s bad for low-paid workers. I’m pretty clear that’s not what the evidence shows. But they can make their case. Nor am I claiming Michael was being deliberately misleading.

But the interesting point here is that Michael and Boris didn’t think it was enough to simply assert their point without evidence. On the contrary, they wanted to appeal to the authority of experts – indeed, the authority of the very experts at the Bank of England who Michael then claimed the people have had enough of.

It also implies that Michael believes that the question of whether free movement is good or bad, and whether it does indeed drive down wages, is an empirical one, and that you should look at the empirical evidence, analysed by experts, before making up your mind.

So the question I have for Michael – apart from suggesting he might want to apologise to Steve – is whether, now that he knows the empirical evidence says almost the exact opposite of what he thought it said, whether  that changes his mind in any way about free movement?  In other words, are his beliefs on this topic –and by extension on other topics – faith-based or evidence-based?

If they are in fact faith based, that’s fine. He’s entitled, as we all are. But then he should tell the voters that. If, however, he’s claiming to rely on evidence, then he has a duty to listen to what the experts on that evidence are actually saying, not what he wants them to say. Sadly, far too often neither our politicians or our media – on all sides of the argument – don’t want to do that.

That doesn’t mean experts – and economists in particular – don’t need to do much better. We need not to present forecasts as fact, and call out politicians – and yes, I’m thinking of George Osborne here – who present them as such. We need to explain what we know and what we don’t know. Experts shouldn’t make political choices. But you can’t – or at least you shouldn’t – make political choices without experts .

By Professor Jonathan Portes, senior fellow at The UK in a Changing Europe. This was based on our role of experts Vs politicians event which was live streamed by the Telegraph. You can also watch it via our Facebook page here.