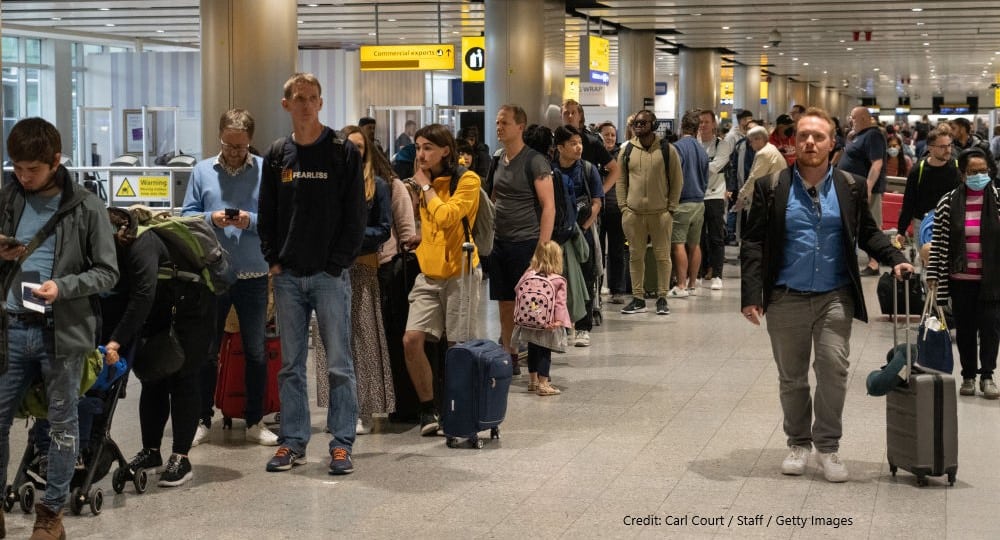 Heather Rolfe analyses new data from British Future’s immigration tracker – which finds that half of the population (46%) believes migration has had a positive impact on Britain, while less than a third (29%) believes it to be negative – in light of the apparent difference in opinion between the Prime Minister and the Home Secretary.

The new government’s policy preferences around immigration for work have been announced. Statements from the Prime Minister and Home Secretary pull in different directions. For Prime Minister Liz Truss, boosting highly skilled migration is integral to the government’s new agenda for growth (though it gets little more than a mention in the Growth Plan).

Meanwhile, new Home Secretary Suella Braverman has proposed resurrecting the discredited immigration cap and is opposed to a trade deal with India on the grounds it could increase numbers who overstay their visas. It isn’t clear which strategy will win out but it does suggest a change from Boris Johnson’s more flexible approach.

Whatever is behind this change in direction, it isn’t public opinion, or at least not an accurate reading of it. The Home Secretary’s party conference speech was a flashback to migration’s more troubled times, with its references to pressures on ‘community relations’ and to employers relying ‘wholly on low-skilled foreign workers’. While in 2012 55% of people believed that migrants damage the economy and take jobs from British workers, only 23% believe that now.

In this period of political and economic turbulence it might be seen as surprising that attitudes to immigration are more positive than ever. Our latest immigration attitudes tracker finds that half of the population (46%) believes migration has had a positive impact on Britain, while less than a third (29%) believes it to be negative. This is almost a complete reversal of attitudes in 2015 when 44% of people believed migration has a negative impact and only a third saw it as positive. 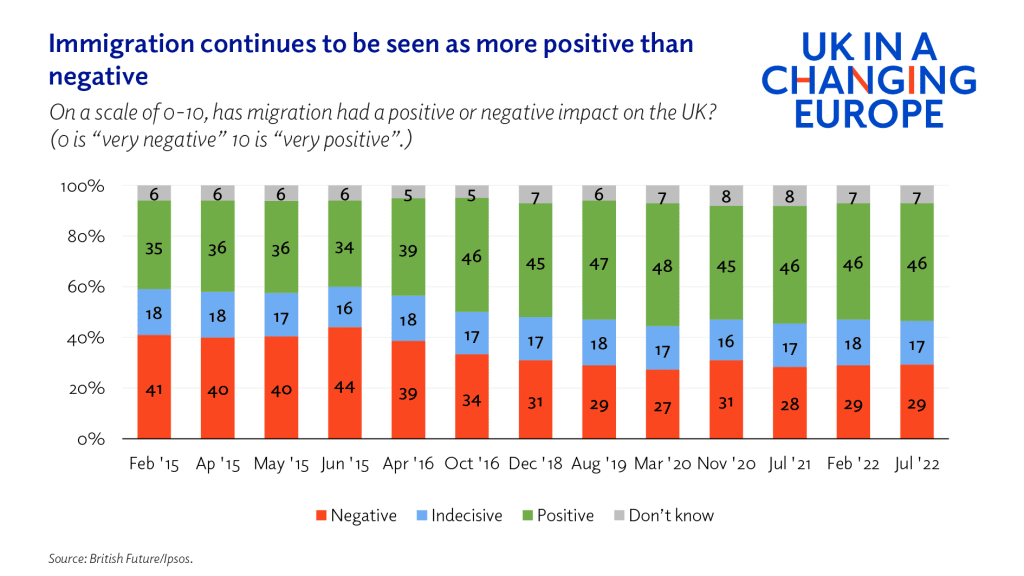 Four in ten people, and a majority of Conservatives, support a system that prioritises control over immigration, even if that means numbers increase. Only just over a quarter favours a system that reduces numbers.

More people would like immigration to be increased or kept the same (24% and 26% respectively) than reduced (42%). This isn’t because people are unaware that migration has increased in recent years: the tracker found people are more likely to be right than not about the increase in migration from outside the EU, as well as the fall in EU migration.

Attitudes to migration for work are particularly positive. The tracker finds significant support, at 44-55%, for increasing the number of migrants in medicine, nursing, seasonal agriculture and social care. A third of people would prefer numbers to be increased in restaurants and catering and construction too. These are occupations and sectors needing a mix of skills, and meeting social as well as economic needs. They aren’t just the highly skilled individuals that the Prime Minister seems to have in mind: our points-based system excludes many in these sectors. 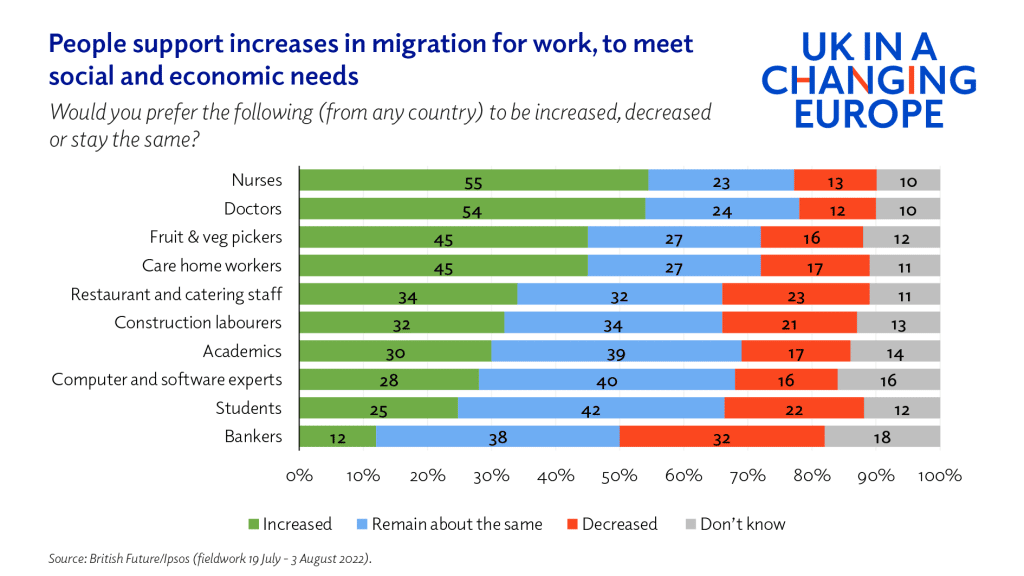 The Home Secretary argued ‘we need to cut down on those numbers that aren’t meeting the needs of the economy’ and train up our own HGV drivers, butchers and fruit-pickers. The public will be aware that this has not worked so far. They see migration as a realistic way of meeting some persistent shortages, where there’s economic or social need. The public also trust employers, with our 2021 tracker finding two thirds believe employers should be able to recruit migrants to any job where there are shortages.

Issues other than immigration now top the list of public concerns. The period of the survey and since has been marked by high levels of public concern about inflation, fuel bills and dramatic increases in the cost of living. Almost a third of tracker respondents say they are finding it difficult or very difficult on their present income compared to one in five in 2016.

But it isn’t just that other issues are more pressing. Attitudes to migration have shifted, so that it is seen by many simply as part of UK life. This is partly because we’ve talked about it much more. For some, the end of free movement has also had a reassuring effect. Mostly, migrants have become more visible and people see how they contribute to their own daily lives, in work and leisure and the services they use.

The public is now much more likely to associate migration with economic health than decline: 53% believe that migrants’ skills and labour are necessary to help economic recovery, compared to only 25% in 2012. Job vacancies are at a record 1.3 million and job adverts are posted in windows of shops and restaurants across the country.

Of course people don’t see migration as the only solution to labour and skills shortages and will want assurance that employers are investing in skills, and recruiting locally. To meet the needs of the economy, employers, people and localities, the skills and immigration agendas should work better in tandem. The public recognises this. They also know it’s not just about growth but addressing immediate and pressing needs, in sectors such as health, social care and agriculture. If new immigration policies are on the cards, our senior leaders should be prepared to discard their conference soundbites and listen to the public.